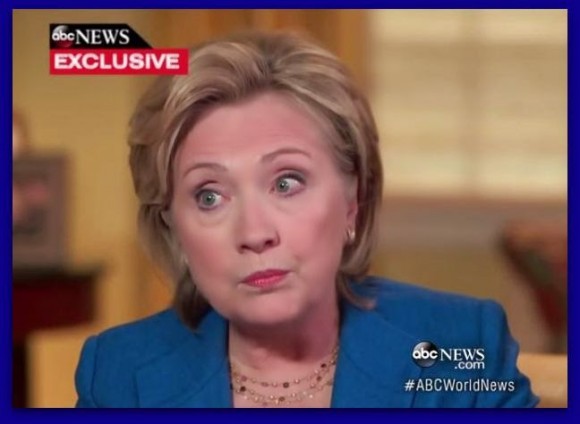 Over the last couple of weeks, Hillary Clinton has excited the press with gaffe after gaffe about money and influence. In fact, The Washington Post’s Chris Cillizza credits her with having had the “worst week” of anyone in Washington, D.C. last week. Campaign metaphors are ripe in the press when it comes to Clinton these days. “Actually, maybe the book tour is a perfect encapsulation of what a Clinton campaign might look like,” comments Cillizza. “And for that, Hillary Clinton, you had the worst week in Washington. Congrats, or something.”

Even Politico acknowledges that Clinton has had a “rough couple of weeks” and that the “majority of attention has been paid to Clinton’s gaffes.”

Politico’s Maggie Haberman writes, in the assessment of Clinton’s qualifications as a candidate, that this is only early in the game and she is “subsisting on a tiny infrastructure.” This, directly after she calls for more “authenticity” from the potential candidate. Which is it? Does the staff speak for candidate Clinton, or does the candidate’s past reputation and words speak for her well enough?

Haberman also comments that “One recurring question reporters and donors have had is whether Huma Abedin, Clinton’s longtime aide, has resumed her central spot in Clinton’s orbit after the messiness surrounding her husband, Anthony Weiner, during the 2013 mayoral race.” We would say probably yes. After all, in what Politico has called a book “written so carefully not to offend that it will fuel the notion that politics infuses every part of her life,” Clinton takes 400 words to defend Abedin. She describes Abedin in Hard Choices as a “trusted aide,” an “American patriot” with “generosity of spirit” who has been falsely accused of “being a secret agent of the Muslim Brotherhood.” Abedin was pictured last year sitting with Islamic Society of North America (ISNA) Mohamed Magid, who didn’t make it onto the guest list for President Obama’s annual iftar dinner while other less controversial Muslims did. (ISNA is connected to the Muslim Brotherhood.) Andrew McCarthy—who successfully prosecuted the “Blind Sheikh” for his role in the 1993 World Trade Center bombing, and the author of several books, including Willful Blindness: A Memoir of the Jihad—has discussed Abedin’s Brotherhood ties at length.

And this is a real media scandal: Ties to the Muslim Brotherhood aren’t even considered controversial by our press, instead they are outright ignored. Former congressman Allen West, a retired Army colonel and a member of the Citizens’ Commission on Benghazi, has detailed in a new column how the Obama administration, and the Hillary Clinton-led State Department, have embraced the Muslim Brotherhood, including having some in official advisory positions in the administration—including in Homeland Security. Incredible.

One of the latest Clinton gaffes, which takes the cake, originated with her husband, Bill Clinton, who naturally came to his wife’s defense about the family finances. According to The Hill, “He said Hillary Clinton had in the past offered legal assistance for poor people and fought for paid leave for pregnant mothers in the 1970s. And he explained that he and the former secretary of State go to their local grocery store on the weekends and talk to regular people.”

Indeed, Hillary Clinton went to work for “one of America’s most radical law firms,” Treuhaft, Walker and Burnstein, in 1971. Since when do you get credit for being in touch because you talk to “regular people” at the grocery store and pay your income taxes?

While on the book tour for her latest work, Hard Choices, Clinton first made the comment on ABC that she was “dead broke” when she left the White House in 2001. This provoked widespread criticism, given that she had signed a book deal with an advance of $8 million, even before leaving the White House, and she commands $200,000 and up for most of her speaking engagements. Hillary and Bill’s adjusted gross income exceeded $100 million between the time they left the White House and when she ran for president in 2008. We now know that Bill Clinton has earned $104.9 million in speeches. “He’s a stud…there was nobody at the Bellagio cabana sunning himself when President Clinton was in the ballroom speaking,” said one person interviewed by The Washington Post.And Hillary Clinton has trumpeted that she pays income tax just like everyone else, with the insinuation that this makes her more like the average working person.

Chelsea Clinton, their daughter, has said she doesn’t care about money—even though her wedding cost about $3 million, and her apartment $10 million, according to the New York Daily News. Does Chelsea really have such a tin ear, as well, or is it just the same PR people spinning? After all, NBC News is working on a month-to-month contract with Chelsea, who has “done just a smattering of reporting” for them, in case her mother decides to run for president—yet she earns $600,000 annually, according to the Associated Press.

The Washington Post entered the fray by noting that “some Democrats fear” Clinton has an “imperial image that could be damaging in 2016.” The Post notes the disconnect between Hillary’s words and her appearance. “When Hillary Rodham Clinton said [in June] that she was once ‘dead broke,’ it was during an interview in which she led ABC News anchor Diane Sawyer through her $5 million Washington home, appointed like an ambassador’s mansion,” wrote Philip Rucker. “Mahogany antiques, vibrant paintings and Oriental rugs fill the rooms.”

The Post has issued wall-to-wall coverage of this subject, but most of it is about ensuring Hillary’s chances.

While “Obama campaign advisors” express concerns about Hillary’s image in this article, the Post is sure to set Democrat readers’ minds at ease: Hillary is, and will always be, the working person’s friend. “Clinton’s allies, however, strongly dispute suggestions that she is disconnected from the concerns and values of middle-class Americans,” wrote Rucker. “They note she grew up in a middle-class suburb of Chicago and said she has committed her adult life to lifting up the downtrodden—from her early work at the Children’s Defense Fund to initiatives at her family’s charitable foundation.” Note that The New York Times’ lengthy exposé last year on the mismanagement of the Clinton Foundation year receives no mention.

What also receives no mention are the steps that the Clintons have taken to shield themselves from the estate tax, which they themselves recently championed. “Bill and Hillary Clinton have long supported an estate tax to prevent the U.S. from being dominated by inherited wealth,” reported Richard Rubin for Bloomberg. “That doesn’t meant they want to pay for it.” While this inherent hypocrisy was glossed over, it did receive a nod in a later Washington Post piece.

And therein lies a political problem for Clinton. While President Obama was the media darling from the outset and immune from all challenges—especially from the media—Hillary Clinton has too much political baggage to be immune to salvos from the right, or even the center. And the media are taking notice.

For example, the Post published a story noting that Clinton can’t remake her image because her record is too well known to the public. Notably, her record on Benghazi is not mentioned. Dan Balz filled this Post story with breathlessness, writing “Experience is her greatest asset but she [Clinton] is constrained by her longevity in the public arena. She knows plenty—but perhaps too much to become an aspirational presidential candidate offering unlimited possibilities. She can evoke realism but can she seize the future?”

Politico told a different story. “She’s faced some criticism of her explanation of the Benghazi attacks, but that, too, has barely been discussed since her Fox News interview with Bret Baier and Greta Van Susteren,” Haberman writes. “If her critics hoped to discredit her self-drafted version of her record, they barely laid a glove on the book’s contents.”

And therein lies another problem. What the press should be asking is a) what were Hillary’s real achievements as Secretary of State, b) do the scandals she’s been part of undercut her ability to become president, and c) what difference at this point does Benghazi really make?