Special Report: Border Patrol Blocks Press From Illegal Buses Outside of their Jurisdiction

PHOTOS: Obama Laughs His Way Through Meeting with Gov. Perry

22 times President Obama was definitely interested in a photo-op

Mark Levin weighs in on Obama admin reaction to Israel, the border crisis, and Obama’s impeachment on Hannity

Barack Obama: “I’m Just Telling the Truth Now. I Don’t have to Run for Office Again

Act of War on America – Mexico and Guatemala Sign Agreement to Fast-Track Invasion of U.S.

OBAMA WANTS TO SPEND 4BIL ON ILLEGALS: We Can Send Them Home Via Orbitz For Way Less

Obama Blames The GOP For The Border Breakdown

A Raging, Out Of Control EPA – Sanctioned Theft From Americans

The IRS Is Playing Hide And Seek With Emails

GOP Congressman: ‘We Just Filed a Resolution Directing the Sergeant-at-Arms to Arrest Lois Lerner for Contempt’

Lois Lerner Did Print Out ‘Some’ Emails, After All

*** A special thank you goes out to the following people for being kind enough to answer my questions and for taking the time to help me with information for this article: Joel Graves, Assistant Digital Director/House GOP; Chair Cathy McMorris Rodgers, House GOP; Congressman Jim Gerlach (PA-6th District); and the House Ways and Means Committee. 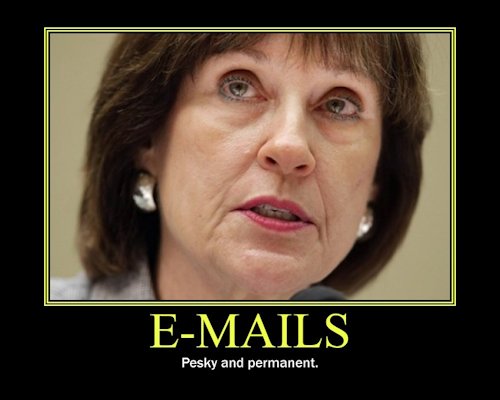 It would appear, that as of yesterday, Lois Lerner got caught with her whole arm in the Tea Jar. Turns out there were email messages from Lerner warning her cohorts that they should “be cautious” about what they wrote and sent in emails, because said emails could be turned over to Congress and used against them. They were released by House Oversight Republicans. The emails were from 2013 between Lerner and other IRS colleagues and were issued less than two weeks after the IRS internal auditor shared a draft report with the agency accusing it of targeting the Tea Party and other conservative groups. The chit chat also went on to say that instant message conversations were probably never stored and weren’t checked during open-records requests — even though they also fell under the law requiring electronic records to be stored. You remember that law: the Federal Records Act, which I have written on previously. It was claimed that none of the emails were printed out, except now it seems some were. Hmmm.

Further implicating herself, Lerner had this to say:

“I was cautioning folks about email and how we have had several occasions where Congress has asked for emails and there has been an electronic search for responsive emails — so we need to be cautious about what we say in emails,” Ms. Lerner wrote in an April 9, 2013, message.

She went on to ask whether the instant message communications were stored automatically. When a tech staffer said no but the records could be stored if employees copied them, she replied, “Perfect.”

The exchange was released in PDF format and states the following: 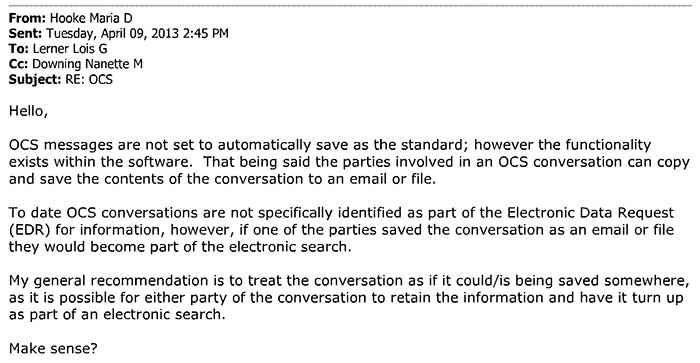 Lerner knew exactly what she was doing and how to circumvent the law and Congress. The IRS’ version of malice aforethought, with the intended murder victim being the Tea Party and conservative entities.

“For her to be worried right on the heels of this draft IG report that Congress may search her instant messages. … That is very troubling,” said Rep. Ron DeSantis (R-Fla.)

I absolutely agree with Rep. DeSantis.

I stand with Rep. Jim Jordan, the Ohio Republican who bravely asked why it has taken six months to get any of these emails. Establishing a chain of evidence is required here and this level of stonewalling is not just egregious, it’s ridiculous in the extreme. It is obvious that Lerner is trying to hide and destroy evidence. She is hoping to run out the clock, until some new emergency takes the limelight off her sullied visage. Lerner is sticking to her bogus line, claiming that the computer that sent the emails crashed and burned and the backup tapes were destroyed after six months. But you see, emails are forever, so no one believes that. Nor do we believe that six of her colleagues magically had the same thing happen to them – it’s just coincidental they were all involved in the scandal. And where did those emails go? I’m sure whoever received them has copies somewhere as well.

The GOP has been addressing this item though. I asked the GOP specifically about this issue: “I understand they are still gathering info on the matter. However, while they are doing so, shouldn’t they be subpoenaing people who also received emails from the individuals who claim that their emails were lost? I think we all know those emails are being hid and/or destroyed. My husband and I are both in IT and this doesn’t meet the smell test even remotely.” The answer:

Both the Oversight & Government Reform and Ways and Means Committees have asked for the emails between personnel, Lois Lerner and one of the five document custodians from the White House, Treasury Department, Department of Justice, EPA, FEC, and OSHA. To date, the White House has produced a very limited number; The Treasury Department has produced nearly 4,000 emails; and DoJ is in the process of producing its emails.

It has taken a year for Lerner and the IRS to turn over these emails to the House Oversight and Government Reform Committee. That is utterly unacceptable. Now, she can’t seem to get her story straight on whether she ever printed out emails or not:

The head of the National Archives testified to Congress that the IRS likely broke federal records laws by not storing Ms. Lerner’s emails properly.

IRS policy was to print out emails that constituted official records, but it’s unclear whether that ever happened.

Mr. Koskinen testified to Congress that he believed Ms. Lerner had printed out some emails. But Ms. Lerner’s attorney, William W. Taylor III, told the Politico online magazine that she didn’t know she was required print out emails and therefore did not do so.

On Wednesday, Mr. Taylor released a statement saying that “is not entirely accurate” and blamed a “misunderstanding.”

“During her tenure as director of Exempt Organizations, she did print out some emails, although not every one of the thousands she sent and received,” Mr. Taylor said.

“The facts are that Ms. Lerner did not destroy any records subject to the Federal Records Act, she did not cause the computer assigned to her to fail, and she made every effort to recover the files on the computer,” the lawyer said.

It’s her job and the law to print out those emails. Ignorance does not absolve you of the law and she knows it. Recently I asked the GOP: “Since this is a blatant violation of the Federal Records Act, which requires that printed copies be kept, is there no legal action that can be taken against those responsible for following the Act?” Here is the answer:

The Federal Records Act (FRA) does not give the ability for criminal penalties. One action item you will likely see in September are both penalties and notification requirements added to both the FRA and the Paperwork Reduction Act (PRA)

That is good news that it will be added, but I wonder why it was not part of the Act to begin with. It’s a little bit too late concerning this scandal. One can only hope that the House will use the purse strings to strangle the IRS and to attain some sense of justice in all this mess.

Many, many of us are frustrated over this scandal and we want those involved held accountable under the law. I asked the GOP yesterday one final question: “Since it has taken this long just to gather info, will we ever have a satisfactory resolution here?” Here is the answer I received:

The Committees are moving methodically to ensure that nothing is left unexamined and that resolution happens as soon as possible. To help expedite resolution, the House referred a special prosecutor in May.

· Additionally, next week the House will consider the Financial Services Appropriations, which includes:

o Decreased funding for the IRS ($341 million less than FY 2014)
o Prohibits funding for:
§ Proposed 501(c)4 regulation
§ Bonuses or awards unless employee conduct and tax compliance is given consideration
§ Targeting groups for regulatory scrutiny based on their ideological beliefs
§ Targeting individuals for exercising their first amendment rights
§ Producing videos or conferences
§ The White House to order the IRS to determine tax exempt status of an organization
§ Destroying records in violation of the Federal Records Act

I commend the GOP for doing this. We don’t always know of or see what is going on behind the scenes and this is being addressed and worked on. However, given that there is no chance of criminal prosecution here, these individuals look to me like they will walk free. The worst that might happen is they retire with benefits intact. I’m sorry, but that does not feel like justice to me. It feels like mission accomplished and it is troubling in its implications for the demise of the rule of law and the Republic as a whole.

It we are to fight the Left on their own turf and stand against their criminal actions, we are going to have get a lot tougher than this and use their own tactics against them. Darrell Issa is right, these emails are a ‘smoking gun’ in the scandal, but will it matter? I certainly hope that it does:

“I think the important thing is she was trying to make sure that on April 9 of 2013 that, in fact, her people weren’t being tracked and she was still using words like ‘caution,’” said Issa, who is chairman for the House Oversight Committee, which is in charge of the IRS investigation. “Why? She didn’t want an audit trail of what they’d been doing and what they were doing was targeting conservatives for their views, no question at all.”

“It’s very clear that on April 9, 2013, well into this investigation, she’s still on the job and she’s still covering her tracks and considering, if you will, whether they are covered,” Issa said.

Issa added, “This is an ideologically driven administration that all of its tentacles are targeting against what they don’t like, and its scary.”

To anyone out there with more than two brain cells left, it is obvious that Lois Lerner and the IRS are playing a wicked game of hide and seek with emails that implicate them and the Obama Administration in an impeach-worthy scandal. I have grave reservations of this resulting in an equatable outcome. We have watched Obama and Company get away with scandal after scandal. You would think that someone, somewhere in our halls of power could charge him with just one of a myriad of high crimes and misdemeanors that he has committed while shredding the Constitution, doing the two-step on it and mocking conservatives all the while. Those emails are forever — they are still out there. America longs for the GOP to hold the IRS and Lerner accountable — if Americans are to believe in their government and the rule of law any longer, then there must be consequences for these crimes. Don’t let justice delayed, be justice denied.

Update: Joshuapundit does an excellent job of dissecting the legal intricacies of Lerner’s predicament. New E-mails Reveal Intent To Hide Evidence From Congress