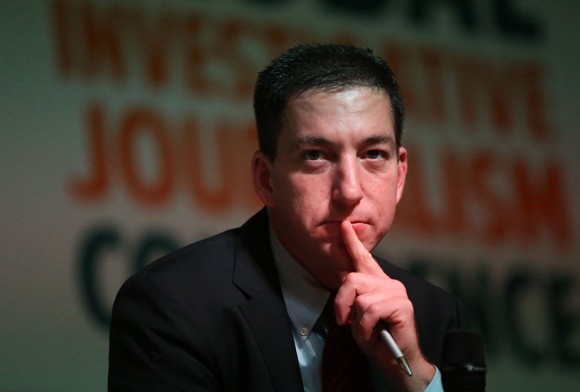 Edward Snowden mouthpiece Glenn Greenwald has “revealed” that the NSA and FBI have been “spying” on the Muslim Brotherhood in the U.S. Is this the “naming of names” the press has been waiting for?

If this is true, it means the NSA has been doing its job. It means all of the critics of the NSA were wrong in portraying the U.S. agency as an out-of-control entity targeting innocent people for no reason.

Greenwald’s publicists are trying desperately to create the opposite impression. They are suggesting that the “Muslim-American Leaders” under surveillance have no associations with subversives or terrorists, but that has not proved to be the case.

One of the individuals allegedly under surveillance was Nihad Awad of the Council on American Islamic Relations (CAIR), a Muslim Brotherhood spin-off.

The Muslim Brotherhood has been banned in Egypt, and three reporters working for its television channel, Al Jazeera, have been jailed on terrorism-related charges.

But Greenwald is still acting as a shill, not only for Snowden, now in Russian custody, but also for the Muslim Brotherhood.

“Latest Snowden Documents Show That the NSA and FBI Engaged in Covert Spying on Muslim-American Leaders,” says the release about his new documents publicized on The Intercept, his new media organization.

That may be true, but so what?

Has Greenwald noticed that America is under attack from Muslim terrorists? Of course he has. In fact, we have pointed out that Greenwald has had speaking engagements at events sponsored by the Council on American-Islamic Relations as well as the International Socialist Organization (ISO), and he seems oblivious to the need for the U.S. to monitor the activities of its adversaries and enemies.

The release says that “Among the archives supplied by NSA whistleblower Edward Snowden, a spreadsheet titled ‘FISA recap’ contains 7,485 email addresses apparently monitored between 2002 and 2008. The Intercept has identified email accounts on the list belonging to five high-profile Muslim-Americans.”

According to Greenwald, the following people were under surveillance (these are the descriptions made available by Greenwald’s press agent):

Portraying CAIR as just “the largest Muslim civil rights organization” is a clever way to suggest that such a group should never find itself under surveillance.

But as writer Joel Himmelfarb has noted, CAIR was listed as an unindicted co-conspirator in the Holy Land Foundation terrorist financing case, and testimony in the trial showed that its founder, Omar Ahmad, and its current executive director and co-founder, Nihad Awad, both participated in a 1993 meeting of Hamas sympathizers and Holy Land officials in Philadelphia.

He notes that additional evidence produced at the trial illustrated the links between CAIR, Hamas and the Muslim Brotherhood, a global Sunni Muslim movement that seeks to spread Shariah around the world.

Greenwald’s publication says its three-month investigation revealed that “in practice, the system for authorizing NSA surveillance affords the government wide latitude in spying on U.S. citizens.”

The release goes on to claim that “The five Americans spied on by the NSA have all led highly public, outwardly exemplary lives. All five vehemently deny any involvement in terrorism or espionage, and none has been implicated in any crime, despite years of intense scrutiny by the government and the press.”

These claims may be true, mostly true, or partly true. Or they may be false. It is impossible to determine at this point.

While individuals under surveillance may be presumed to be innocent until proven guilty of wrongdoing, the CAIR connection to one of them suggests a controversial foreign connection that justifies government interest.

Another one of the individuals allegedly under surveillance is Asim Ghafoor, a former spokesman for the Global Relief Foundation, a group raided by federal agents, which came under close scrutiny for alleged links to terrorists. Its European director was said to be “acquainted with Wahid El-Hage, a personal aide to Osama bin Laden.”

A story about this controversy noted that El-Hage, along with three others, received a life sentence “for conspiracy in the 1998 bombings of the U.S. embassies in Tanzania and Kenya, which killed 224 people, including 12 Americans.”

Not surprisingly, Iranian Press TV, an organ of the terrorist regime, has run with the Greenwald story under the headline, “NSA and FBI spied on 5 innocent Muslim-Americans after 9/11: Report.”

But they are not innocent if the surveillance was based on their controversial connections to foreign terrorist organizations such as Hamas or al Qaeda.