Limbaugh Was Right! Krauthammer, Will, Kristol Should Apologize
by John Kirkwood / on July 13, 2014 at 7:08 pm

About the author: John Kirkwood is a son of Issachar. He is a Zionist, gun-toting, cigar-smoking, incandescent light bulb-using, 3.2 gallon flushing, fur-wearing, Chinese (MSG) eating, bow-hunting, SUV driving, unhyphenated American man who loves his wife, isn’t ashamed of his country and does not apologize for his C … [read John Kirkwood’s FULL BIO] 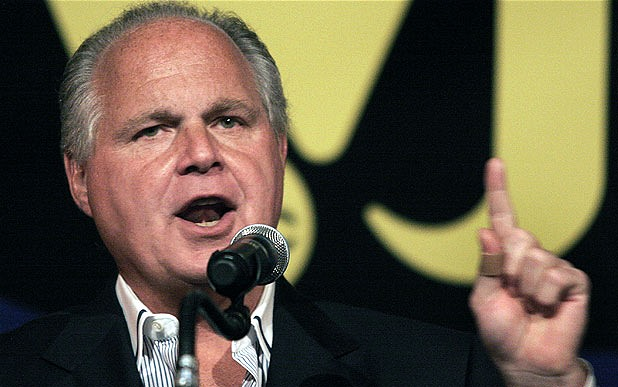 He has made judges dependent on his will alone…He has erected a multitude of new offices, and sent hither swarms of officers to harass our people and eat out their substance…For imposing taxes on us without our consent…For depriving us in many cases, of the benefit of trial by jury…For establishing an arbitrary government…For altering fundamentally the forms of our governments…He has plundered our seas, ravaged our coasts, burnt our towns, and destroyed the lives of our people…He has excited domestic insurrections amongst us.

Do these charges ring familiar? I listed them on my blog in the days following Independence Day and one of my readers confessed that he thought I was railing against Barack Obama until he realized that I was quoting our Declaration of Independence and the charges made of George III.

And this is exactly what Rush warned us about before the inauguration when he said “I hope he fails.” Rush, in the same way that Patton knew Rommel, knew what Obama would do because he had read his book. It wasn’t rocket science, Rush had done his homework. He had listened to Obama’s own words, studied his background, and broken the code.

Those in the “conservative intelligentsia” are in the awkward position of having to admit either that Rush was right or feign surprise at the new realization that the Emperor is buck naked and therefore incompetent.

No beltway nabob will ever admit that Rush was right – that the President is an Alinsky Marxist implementing a Cloward/Piven coup to transform Uncle Sam into a tranny with an “I ♥ Antonio Gramsci” tramp-stamp emblazoned above her hot pants.

The truth is that leading Republicans and “conservative” journalists know that this president is not incompetent. They even know “what” he’s doing and “why,” but they don’t have the guts to tell the truth.

Bill Kristol, George Will, and Charles Krauthammer would rather commit ritual Seppuku than admit that Limbaugh has been right from the start. And to tell the truth now is to admit their own incompetence. So the party line will be that the President is illustrative of the Peter Principle. He isn’t following a recipe that he once taught to ACORN operatives out of Rules for Radicals, he’s merely “Jimmy Carter’s second term.”

Even my guy, the great Ted Cruz, on the Kelly File the other night, called Barack Obama “An absentee President,” who is not focused on the people “who are paying the cost for his failed policies.”

Sorry Ted, but that’s hogwash and you know it.

Maybe Senator Cruz has determined that the truth won’t sell or that Democrats will use that kind of rhetoric to their advantage, but wouldn’t it be refreshing to have a voice or a pen that communicated with the same clarity that Thomas Jefferson did against George III?

Obama is purposely destroying the American way of life. He is not governing, he’s ruling by sabotage. He doesn’t respect the Constitution, he flanks it. He doesn’t revere our Institutions, he batters them. And just because he’s golfing, clubbing, and playing pool doesn’t mean that he’s failed and incompetent any more than Al Capone getting a manicure or a lap dance meant that he was distracted from ruthlessly ruling and expanding his influence.

“The whole aim of practical politics,” said H.L. Mencken, “is to keep the populace alarmed (and hence clamorous to be led to safety) by menacing it with an endless series of hobgoblins, all of them imaginary.” Obamacare was destined to fail from the start because it was meant to issue in “single payer.” Run guns to Mexican cartels to foment a backlash here against the 2nd Amendment. Create chaos at the border to get amnesty. Gin up Global Warming hysteria to take control of energy. The goal is to control every aspect of American life and they are well on their way without nearly a peep out of the opposition party or the lapdog press.

As a friend wrote to me this week,

“I don’t think Obama has ever really worked a day in his life. He’s the spoiled child of an unstable single mother who, along with his grandparents, pampered him. He is a white boy who made it through the ranks of the radicals because of his dark skin and Good-time Charlie attitude. He is where he is because the Alinsky radicals knew they had The Guy for the job even if it meant they would do all the work. So yes, his actions are deliberate even if he is just the pretty face whose rhetoric distracts the sheep while his more competent policy makers prepare the slaughter.”

Ezekiel, a prophet of Israel, once described a true leader as a “Watchman on the wall.” His description was of a sentry manning a post on a wall of a fortified city whose one job was to watch the horizon and if he saw trouble approaching, to blow his shofar. If he alerted the people and they didn’t respond, their blood was on their own hands, but if he didn’t blow the alarm then the people’s blood would be on his hands.

Back in 2009, while George Will was hosting Mr. Obama at an off the record soiree and handing out finger sandwiches to fellow “conservatives” – Peggy Noonan, Charles Krauthammer, Rich Lowry, Paul Gigot, David Brooks, Larry Kudlow and Michael Barone, Rush Limbaugh was blowing the shofar. When Limbaugh wished that this president failed, he meant that he hoped that he failed in carrying out his sabotage of the last bastion of freedom on planet earth.

Incompetence may only be negligence but sabotage is treasonous. Rush Limbaugh, Mark Levin, Michael Savage, and Sarah Palin are the lone voices of truth calling this what it truly is – a conscious, pre-meditated, well-organized coup. And they act as Maximus calling out the treachery of Commodus but in this case there isn’t even a single Senator with the brass to join them. I have long thought that there would be a group of generals and admirals who have been summarily purged from the Pentagon who would stand up for freedom. I was wrong.

Sharpen your pitchforks, it’s up to us.

2 thoughts on “From Jan Morgan Media: Limbaugh Was Right! Krauthammer, Will, Kristol Should Apologize”