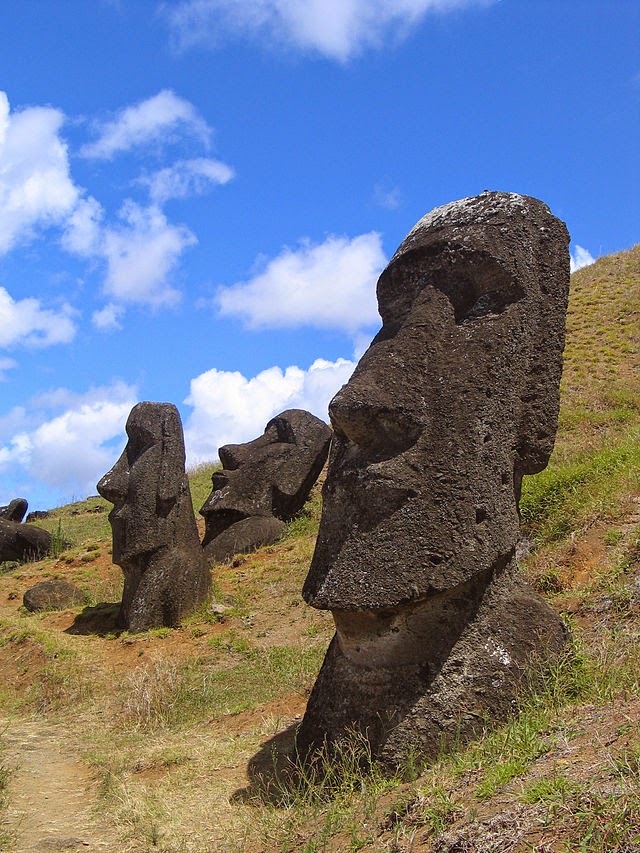 Archeologists have a catch phrase that covers parts of the unknown history of any site they find.  It pops up when no logical answers to a particular item present themselves, “Probably used in some religious ceremony”, or words to that effect.  It doesn’t matter if it’s Stonehenge, Cliff Dwellings or the giant heads looking out to sea on Easter Island, “Must have some unknown religious significance”.

I’ve no problem with this approach to human history; heck, they’re probably right most of the time.  With no surviving members from ancient societies to shed light on what is found, it can only be assumed what their actual purposes were or make educated guesses as to any actual purpose for some of these finds based on how modern decedents use these items and places.

Take for example the kiva, generally assumed to be a special room used by the ancient Pueblo inhabitants in the Americas for religious ceremonies…

“When designating an ancient room as a kiva, archaeologists make assumptions about the room’s original functions and how those functions may be similar to or differ from kivas used in modern practice. The kachina belief system appears to have emerged in the Southwest at approximately AD 1250, while kiva-like structures occurred much earlier. This suggests that the room’s older functions may have been changed or adapted to suit the new religious practice.”

If I had a nickel for every time historians used descriptive words like assume, probably, may have been, likely were and so on…my bank account might be in better shape.  The fact is, we really don’t know for sure; but we’re too proud to admit it.

I could dig a small rectangular hole in my back yard complete with a large round stone to cover my new found wealth, place all my nickels in a fancy sack and hide it therein.  Do you see where this is going?

Years from now when archeologists happen upon this interesting spot under a huge Oak that’s out lived anyone from this era they will carefully examine the contents of the find, carbon date the residue found in the filter of a cigarette butt my son flipped in the hole and match it to a core sample from the Oak tree.  One of them will curiously examine the trinkets found along with fragments of cloth that at one time held them.  Measurements will be taken and compared with similar finds, “No doubt this was used for religious purposes, likely sacrificial offerings to their gods.”

Scientists have found a giant hole in the surface of the earth over in Siberia, Russia.  It caught them off guard as the image was generated via satellite.

“The leading theory is that the crater is actually a natural phenomenon known as a ‘pingo.’ A pingo, or hydrolaccolith, occurs when ice pushes up from underneath the ground. In this case, climate change may have caused the ice to melt, resulting in a crater where the earth-covered frost once stood.” (emphasis added)

Based on the theory’s claim that climate change may have caused the ice to melt, which left the huge hole in the ground, the article mentions that scientists will be sent to the region to find facts to support such theories.  As with most assumptions supplied by the Church of Global Warming, there are yet to be facts to support such findings.

Next week I’m sure there will be a History Channel special supporting the idea that Aliens from across the universe used this great Kiva, possible humanoid life forms, seeded this planet long ago and served as the missing link to homo sapiens populating this spinning planet.  I’m picturing that geeky looking fellow who never figured out what a comb was intended to be used for, perhaps thinking it was a sacred religious item never to be touched by anyone other than the gods.

The great Kiva of Global Warming has presented itself for the High Priests of Junk Science to study and ascertain its purpose.  These are the same folks who brought you the United Nations IPCC report which is riddled with fabrications and computer generated assumptions based on improperly recorded data by folks being paid to come up with a viable presentation intended to redistribute wealth on a planetary scale.