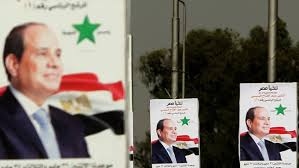 Some would say Egypt now leads the world in the war against terror, and Egyptians are relieved to see punishment for Morsi’s Muslim Brotherhood backers. Concerned with Egypt’s “overall stability” during his June visit to Cairo, John Kerry cautioned President Al-Sisi about the recent death sentences for MB members (theguardian.com, June 22), emphasizing tactical errors in the political environment. State Department officials are concerned by Al-Sisi’s “polarizing” tactics and seem to imply that getting on with the business of democracy has nothing to do with cleaning corruption and hunting down jihadists. If Al-Sisi manages to convert an Islamic state to anywhere near the full experience of human rights and equality it would be a first in this part of the world, and it would require beginning with the hardline he has now taken.

Before Kerry stresses Egypt’s need for the greater political freedoms he might remind himself of the humanitarian guidelines found in the Cairo Declaration of Human Rights — the document signed by Egypt when it refused to sign the rigorous U.N. Universal Declaration of Human Rights — under which Egypt functions. Democracy won’t materialize overnight especially in the Islamic Middle East where nothing is what it seems and nothing goes in a straight line. Where there is no precedent on how to reverse six decades of Islamist buildup that culminated with rule by jihadists, Al-Sisi is on his own, so to speak.

Ultimately America understands this while it endorses him. The U.S. has handed over the check. Coldness between the U.S. and Egypt – Al-Sisi refused to receive Obama’s phone call after Morsi was removed, U.S. froze aid, the Secretary of State did not attend Al-Sisi’s inauguration – spares Egypt any more U.S. delegations brandishing the moral high ground regarding Egypt’s death penalty for former government henchmen (MB spiritual guide, deputy of MB, former MB prime minister, former MB cultural minister) and savage street gangs – fierce and unsavory agents of the street.

No one can predict what Al-Sisi will eventually do or become for the democratic effort, but identifying and ridding the country of terror cells as a priority is important. It is viewed as the first step in achieving human rights. No former Egyptian president has genuinely turned against the MB because each was affiliated with the organization in one way or another. As a consequence, the MB was confined to dark dungeons where it produced the treatises for the extended terror enterprises the world endures today.

If Al-Sisi is truly detached from this network, which he seems to be, he will use his power and knowledge as former head of military secret service to eradicate hardcore cells that paralyze progress – no small matter. MB members and sympathizers make up 20 percent of Egypt’s population. The non-violent Christian Copts make up another 20 percent of Egypt and are the Brotherhood’s strongest ideological opposition. Copts are eager to see the end of Islamic religious governance in general. Along with their Muslim neighbors, Copts have naturally welcomed the collapse of the Morsi-Muslim Brotherhood terror reign. But will Coptic clergy, subjected to centuries of religious overlords, begin to understand what it means to have separation of church and state in order to have freedom of religion?

Coptic Bishop of General Services, Bishop Ioannais, emphasized in a recent web site interview that church leadership must govern all of life’s decisions. To paraphrase him, the bishop pointed toward the church establishment as the only “identity” necessary for citizenship (copts-united.com, July 6). In these remarks, Bishop Ioannais, who was nominated by Pope Shenuda and ran interference through church channels to calm the streets in Egypt and in the American diaspora when Mubarak or government officials paid visits to America, specifies that the church is to be the sole political representation of its adherents.

Back in the fall of 2010, Coptic youths revolted against the regime as well as the control of the church to finally spark Egypt’s uprising which formed the freedom movement of January 2011. Such statements coming from the bishop clash with the will of the majority of Egyptians who are fighting to have a democratic state without control from the mosque or the church. The bishop’s regressive notion appears absurd in the current climate. It is also very dangerous to the stability of the country, potentially creating rivalries between religious authorities. This rivalry and the supremacy of Islam is flourishing in the religious agenda-driven courts of Egypt’s Arab republic.

Over the past two weeks during Al-Sisi’s first month in office, the courts delivered guilty verdicts in three separate cases for three individuals who blasphemed Islam. Today, brainwashed Islamic judges reinforce the status quo of Sadat’s and Mubarak’s Egypt: a Muslim of the 2011 pro-democracy movement converts to Christianity, a Christian schoolteacher allegedly teaches fourth graders that Buddha was greater than Mohammed, and a Christian in his late twenties “likes” a Facebook page critical of Islam – each sentenced to jail for five years, three years, and six months respectively.

This is normal. This represents what the Al-Sisi government must tackle to satisfy his liberal constituency. Still, impatient (and perhaps fearful) Egyptians react hastily, pointing out that these verdicts are already the fault of the new president due to ideology or ineptitude. If Al-Sisi’s attempts at modern reforms water down and his Egypt becomes like Mubarak’s, tying today’s court decisions to Al-Sisi will be seen in retrospect as accurate for either reason.

It is important for Egyptian democracy-seekers to scrutinize Al-Sisi’s every move. Certain actions and inactions should cause alarm but others not. For instance, a red flag should go up if the Salafists’ Al Noor party has not been disbanded within three months of Al Sisi’s installation. Or worse yet, if the illegal Al Noor party is allowed to hold seats in the new parliament. This would not represent pluralism as Western media will surely tout but indicate something very wrong with Al-Sisi who made certain promises to the secular liberals who in turn urged him to power. The Al Noor party is a fringe element representative of the ideology underpinning Egypt’s terror network.

However, it could be taken as a good sign if Al-Sisi draws out the time needed to prepare the country’s parliamentary elections from the 90 days mandated by the constitution to six months or one year.  Based on what is known about Al-Sisi from past efforts, this could indicate that he continues to clean corruption for preparing new outcomes.

Furthermore, if Al-Sisi proves to be a trustworthy, tireless fighter for the people on the level he has so far, Egyptians will be more than willing to endure Al-Sisi’s recent economic decision. He has removed government subsidies from the daily Ciabatta bread, milk and gasoline and other basic provisions – skyrocketing prices — requiring more sacrifice from a bankrupt people to move the entire country forward. More than ten days of inflated prices so far have not riled the people to the streets in protest as three days into the same “free trade” attempt ordered by Sadat did in 1977. It’s been suggested that Egyptians now collectively understand (fear) that one false move in the streets could risk a takeover once again by the MB.