We buried another lone soldier today.  Max Steinberg, 24, a Golani soldier who came from Los Angeles just a couple of years ago.  Again, a call went out for people to come to the funeral, held at the national cemetery on Har Herzl, Jerusalem.

Jerusalem Mayor Nir Barkat said: “Over 30,000 people came to give you the honor of a hero. The strength of the Jewish people lies in people like you.”

There are tears that do not go away. 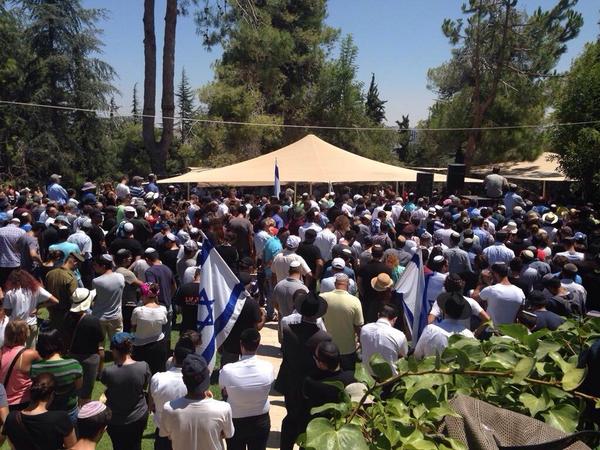 The big news last night was that the US Federal Aviation Administration gave an order banning US flights to and from Ben Gurion Airport for 24 hours. (That ban has already been extended beyond the original 24 hours.)  Some US airlines then said they were going to cancel flights into Israel indefinitely. and some European airlines fell in line.

The US is saying that this was done because of potential risk to planes of being hit by Hamas rockets, because a rocket had hit a house in Yehud, which is about a kilometer from the airport.

Minister of Transportation Yisrael Katz (Likud), however, calls this decision “surrendering to terrorism”: “This decision is not proper…Contacts are being made at all government and professional levels to change this decision.”   He explains that both because of the Iron Dome system and the airport’s own security arrangements – both inside the airport itself and for aircraft – there really is no reason to fear.

The airport remains open; El Al continues to operate and has no intention of stopping.

“For years, peace processors and pundits have threatened that to stop its ‘growing international isolation,’ Israel must make ‘painful concessions’ and withdraw from territory. The ‘growing isolation’ was always a myth…

“Now, however, international isolation has truly arrived–not from holding territory, but from leaving it. With the suspension of American and European flights to Israel’s Ben Gurion Airport, rockets from Gaza yielded what peace processors said settlement construction would. The flight suspension by all major airlines is a major–even if temporary–economic, diplomatic, and psychological setback for Israel. It finds itself, for the moment, in same position as Iraq, Libya, and Somalia.

“The subtext here is that Israel has a sword at its neck: face a private-sector no-fly zone or agree to a cease-fire that lets Hamas keep its rockets, and thus close Ben Gurion Airport again at the time of its choosing. It is a lose-lose proposition…

“Indeed, the decision-making behind the FAA ban demands investigation. Ben Gurion remains an extremely safe airport. The FAA had many various measures short of a flight ban, like warnings, that it could have imposed. The FAA only warns airlines about flying to Afghanistan; it does not ban them. And the FAA move comes the day after a general State Department warning about Israel–though far more people were killed in Chicago on Fourth of July weekend than in the Jewish state since the start of the Gaza campaign…”

J.E. Dwyer, a retired Naval Intelligence officer who cites Kontorovich in her piece, provides additional evidence for the political nature of the FAA ruling (emphasis added):

“I would cite the example of Pakistan, where there have been multiple, very serious attacks on commercial airports in recent months, including an attack on an airliner in Peshawar, this one on the airport in Karachi, and an earlier one involving Taliban rocket fire in Peshawar…In none of the instances in Pakistan has the FAA banned U.S. carriers from flying in and out of the Pakistani airports.  At most, it has issued safety warnings.”

(With thanks to Saul G.)

The bottom line here is that we cannot allow Obama/Kerry to squeeze us.  We must – absolutely must – bite the bullet and do what we need to do with Hamas in Gaza.

“We have known for years that tunnels were a central component of Hamas’s logistical infrastructure.

“What began as the primary means of smuggling weapons, trainers and other war material from Hamas’s sponsors abroad developed rapidly into a strategic tool of offensive warfare against Israel.

“As we have seen from the heavily armed Hamas commando squads that have infiltrated into Israel from tunnels since the start of the current round of warfare, the first goal of these offensive tunnels is to deploy terrorists into Israel to massacre Israelis.

“But the tunnels facilitate other terror missions as well.

“If the bombs had gone off, the buildings above would have been destroyed, taking the children down with them.

“…Tunnel warfare provided armies facing a technological superior adversary with an effective means for countering its air superiority.  For example, a tunnel is opened only briefly to launch rockets and then immediately closed to prevent detection of the launchers’ location by the IDF.  The concealment of these launchers in tunnels, in the heart of the civilian population, makes it very difficult to detect them in real time and attack them…

“The attack tunnels create a new equation in the power balance between Israel and Hamas. They give Hamas an ability to infiltrate Israel and carry out strategic attacks involving mass killing, along with an ability to launch missiles from locations concealed within civilian population centers that serve, in effect, as human shields. Should Hamas retain in the future 20 tunnels, and dispatch 50 operatives in each, they could deploy 1,000 men behind Israeli lines. The tunnels would allow Hamas to wreak havoc if they are left in place.”

Thus, there must be no cessation of Israel’s operation in Gaza until the job is done.  No, “almost done,” no, “we got most of the tunnels.”  Done.

Kerry is here in Israel, working on that ceasefire.  He claims to have made “some progress,” but we must remind ourselves that he always says this no matter the situation.  “There is still work to be done,” he admits, and I would say so:

From Qatar, Khaled Mashaal declares in a public statement, regarding a ceasefire, “We reject today and will reject in the future.”

Mashaal will not accept the Egyptian proposal for establishing a humanitarian ceasefire first and then negotiating terms.

First Israel must end its siege of Gaza, he says, and then there can be a ceasefire.  No outside force will disarm Hamas. (So much for Netanyahu’s notion of getting the international community to do this.)  The only way this could happen is if Israel also disarmed, says Mashaal.

And please note this:

“Referring to the suspension of international flights to Israel, Mashaal said: ‘When you lay siege to our airspace, we lay siege to your airspace. The resistance is today in the Gaza Strip and tomorrow it is capable of surrounding you in the West Bank.’”

Heaven is giving us our chance here.  Mashaal reminds me of Pharaoh, whose heart was hardened.  He thinks he can stand against us, but he is sowing the seeds of Hamas’s destruction.

He says that he and the other leaders of Hamas are prepared to die for the sake of ending the blockade.

But that’s pure rhetoric. While we would be happy to oblige, what he means is that he’s prepared to allow the civilians of Gaza to keep dying.

“Hamas has millions in assets, and it seems that the wealth extends to day-to-day life as well as investments and fat bank accounts. For them [the leaders], life is about private jets and luxury, not war planes and hunger.”

Where are we now?  Making good progress, winning every battle with Hamas, uncovering new tunnels.  We have captured several Hamas operatives, and secured information from them about tunnels we hadn’t been aware of.  Just today a major tunnel was discovered that had maps and weaponry that was clearly intended for an imminent terror attack.

Obviously, Ya’alon’s statement three days ago that we needed only two or three more days was over-optimistic.  Either that, or, my gut tells me, perhaps at that point it was anticipated that a ceasefire would be forthcoming soon, and so it was best to set this time table publicly.

At any rate, several more days are necessary.  Tonight there is talk that the Security Cabinet might vote to further step up the operation.

As we progress, painfully, we also continue to lose soldiers.

Today, we struck a terrorist position in al-Wafa hospital in Gaza (emphasis added):

“IDF sources say that the controversial decision to attack the position was taken after several days in which ground forces came under heavy fire from gunmen positioned inside the hospital grounds. The fire report included both light weaponry and heavy anti-tank missiles directed towards IDF armored vehicles.

“The hospital premises were being used as war rooms and command centers by the terrorist groups Hamas and Islamic Jihad,’ said an IDF spokesperson.

“The military added that it had repeatedly warned international agencies and the Palestinian head of the hospital directly about the gunfire from the hospital, as well as several other senior Palestinian officials – but to no avail. Instead, in the past several hours the intensity of the attacks has only increased, posing a real and imminent danger to the lives of soldiers operating in the area, forcing the IDF to respond with fire of its own.”

The fact that the IDF finally acted here is significant,  That Hamas uses hospitals as command centers is hardly news.  But the readiness to defend our soldiers (after appropriate warnings), even if a hospital was involved, shows a strength that is encouraging.  They didn’t hold back because the PR will be negative.

There are rumors that we have killed  Muhammad Sinwar, one of the commanders of Hamas’s military wing.  Hamas is denying this.

Unquestionably, we are aiming for the big guys when it is possible (and they’re not hiding in tunnels under hospitals).

Former New York City Mayor Mike Bloomberg, is here in Jerusalem, having flown in on El Al:
“I flew here to show solidarity with the Israeli people, who have come under attack from Hamas, and to show that it’s safe to fly in and out of Israel.

“Halting flights here – when the airport is safe – hurts Israel and rewards Hamas for attacking Israel. Hamas wants to shut down the airport; we can’t let that happen.”