Cliff Kincaid takes Megyn Kelly to task for her water-downed interview with Bill Ayers in this recap of current events for USASurvival.org. Cliff has also got some interesting information on terrorist fugitive Elizabeth Ann Duke, and possible White House involvement in the case.

But getting back to the Megyn Kelly interview with Bill Ayers. Admittedly, I didn’t even bother to watch Megyn Kelly’s interview with Bill Ayers. And here’s why. I have done volunteer work in both jails and prisons. There’s a few things I was taught, and also learned firsthand, about working with “difficult personalities.” One of the most difficult types of personalities to deal with is an actual sociopath.

Q. How do you deal with a real sociopath?

A. As little as possible. 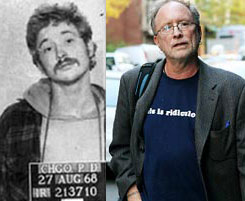 Bill Ayers, then and now.

I believe Bill Ayers is a sociopath. He shows absolutely no remorse for his crimes or actions, even after all these years. Ayers can justify and rationalize all of his bad behavior and illegal acts. I believe he is proud of what he has done, and he basks in all of the attention. Sociopaths love to be the center of attention, from my experience.

I’ve also heard Ayers refer to his “enemies” in nebulous terms like “they” and “them”—they did this and they did that. It’s typical of a sociopath to deflect from any responsibility for their own actions and shift all blame onto someone or something else, i.e. projection.

There’s no point, in my opinion, in attempting to have an honest debate with a sociopath like Bill Ayers. He will lie, cajole, deflect, feign outrage—whatever it takes to put the blame and the focus back on his nebulous “enemies.” Don’t think for a minute, when dealing with a sociopath like Bill Ayers, that by directly confronting him with the consequences his crimes might have had on others that they will all of a sudden experience some “come to Jesus moment” and break down and confess all of their wrongdoings and beg for forgiveness. Ain’t gonna happen, as Megyn Kelly is fond of saying.

Furthermore, the more attention you bestow on a sociopath, the more time you give them to size you up. The only thing Megyn Kelly accomplished, in my opinion, was to simply legitimize Bill Ayers by giving him a platform from which to spew his brand of spitting, Marxist moralism.

If I were Megyn Kelly, I would simply say, “No, we’re not giving that piece of sh*t, Bill Ayers, any airtime on our news network … hope he rots in hell.”

That’s how you deal with a sociopath … in my oh-so humble opinion.