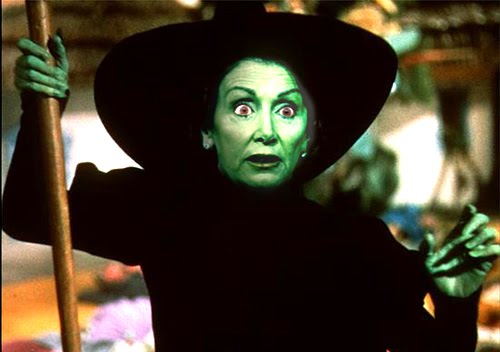 Classy. Screams of “I’m melting!, I’m melting!” were said to be heard on the House floor yesterday. The wicked witch of San Francisco, Nancy Pelosi, went into actual meltdown during the border funding bill debate. It’s must see tv:

The old bag actually chased Rep. Tom Marino across the House floor, screeching that she took offense at his comments. I don’t know why… all he said was the truth. That she did nothing to prevent the border crisis when she was House leader and that she couldn’t be bothered to research anything period. Truth hurts, doesn’t it dearie? Break down in decorum doesn’t quite cover it. Heh.

“We don’t have law and order,” Marino began as he wrapped up his comments on the border supplemental. “My colleagues on the other side don’t want to do anything about it.”

“You know something that I find quite interesting about the other side? Under the leadership of the former Speaker [Pelosi], and under the leadership of their former leader [Rep. Steny Hoyer], when in 2009 and 2010, they had the House, the Senate and the White House, and they knew this problem existed,” he continued. “They didn’t have the strength to go after it back then. But now are trying to make a political issue out of it now.”

Off-mic, Pelosi then approached Marino, crossing the aisle in view of cameras, and apparently challenged Marino’s assertion that Democrats did not do anything about the issue when they had majority control.

Marino then urged the House to pass the Republican bill (which I think was a mistake — but never mind that, there is no way it will ever pass the all powerful pen power of Obama), which the House overwhelmingly did. Marino urged passage “because apparently I hit the right nerve.” Indeed he did and he set Pelosi off big time. You just don’t do what she did on the floor – especially if you are supposedly a cultured, refined woman who has led said House. But order be damned… let’s make a spectacle of ourselves!

After Marino concluded his remarks and as many Republicans applauded their colleague, Pelosi crossed the chamber again in view of cameras, enraged, pointing and sticking her finger at Marino.

She then followed Marino up a Republican aisle, gesturing and arguing with him. Lawmakers on the GOP side gathered in dismay as one spoke out to tell the chair that the House was not in order, in an effort to halt the bickering.

Pelosi finally relented after Republicans tried to get between Pelosi and Marino, and she returned to the Democratic side of the chamber. The House then promptly voted to approve the $694 million border supplemental, 223-189.

Evangeline George, Pelosi’s front piece, stated the following: “Leader Pelosi just wanted to remind the Congressman that House Democrats had the courage to pass the DREAM Act – and have the courage to stand up for what the American people want: bipartisan, comprehensive immigration reform.”

So, if I understand this twit correctly… Pelosi’s crew had the “courage” to pass a measure calculated to create the situation on the border — to throw gas on the fire if you will — in other words, their version of ‘doing something’ about the problem was to create the problem in the first place. Reform my ass – this was laying the groundwork for an orchestrated invasion. Not immigration reform, but invasion reform.

Then George does what all Marxists do when they have stepped in it… she lied. She added: “Pelosi accepted the Congressman’s apology.”

Except Marino didn’t apologize according to his Chief of Staff, Bill Tighe. He firmly stated that not only did Marino not apologize to Pelosi, he had no intention of doing so. Good on ya, son!

“[Rep. Marino] did not apologize to Leader Pelosi and does not intend to do so as he has nothing to apologize for. She was entirely out of line in approaching him while he was recognized and delivering remarks on the Floor,” Tighe wrote in an email. “Her staff’s comment in your story about her accepting his apology in simply not true.”

Lying liars gotta lie and Nancy is an expert. But hey, Marino is just an average guy battling the Wicked Witch of the West and her evil flying monkeys: 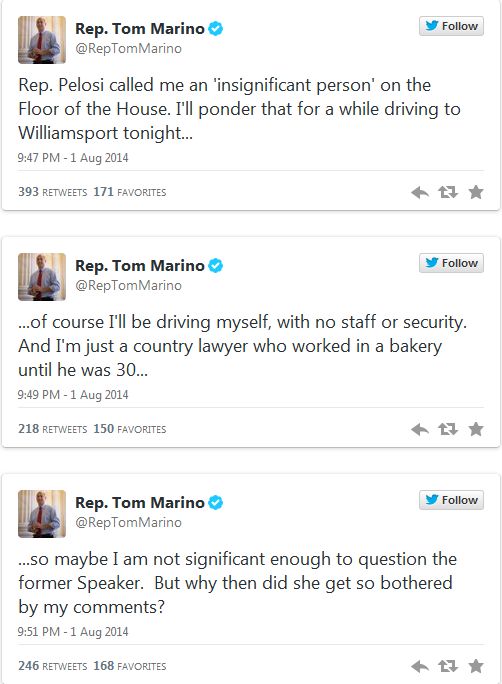 So, the Wicked Witch literally has a meltdown in the House in the Republican aisle. Someone should have yelled for a cleanup. But I guess this is one time she actually crossed the aisle. Good times and I commend Rep. Marino for calling out the botoxed hag for her lies and misrepresentations.

Hey Pelosi, you want courage? Enter the Progressive Vampire Slayer and prepare to melt away!

5 thoughts on “The Wicked Witch of the House in Meltdown”