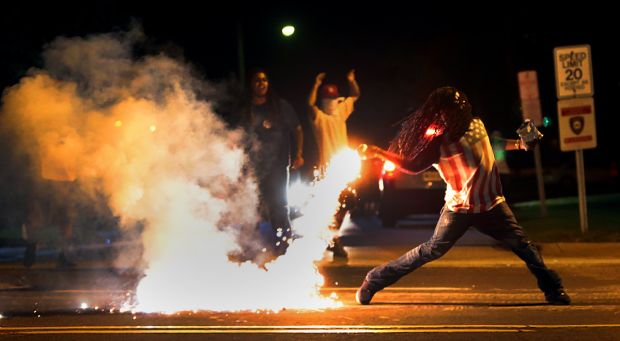 A demonstrator throws back a tear gas container after tactical officers worked to break up a group of bystanders on Chambers Road near West Florissant early on Wednesday, Aug. 13, 2014. Photo by Robert Cohen, [email protected]

A black, unarmed 18 year old was shot by police in Ferguson, MO and rioting and violence ensued. Then the militarized police got their game on. This is not your Daddy’s everyday cop either – these officers are armed to the teeth and ready to do a boogie on anyone who gets in their way.

Michael Brown was the name of the teen in question. He was in the process of being arrested when he was shot. Confusion surrounds the events and now the police are saying they will not release the name of the officer who shot Brown. As far as it is being told, Brown, who was a big boy, resisted arrest as he was being put in the cruiser. A tussle ensued where Brown tried to get a hold of the officer’s weapon. He then fled the scene and the cop pursued him. The officers are claiming that one round was shot off in the car and it is being claimed they shot at Brown several times before bringing him down. Others claim the police shot Brown in cold blood while he had his hands up. No one contests he was unarmed though. Something doesn’t add up here, but we won’t know what happened until evidence surfaces on this. One thing is for sure, the community is pissed off and people have come from outside to incite unrest and looting. 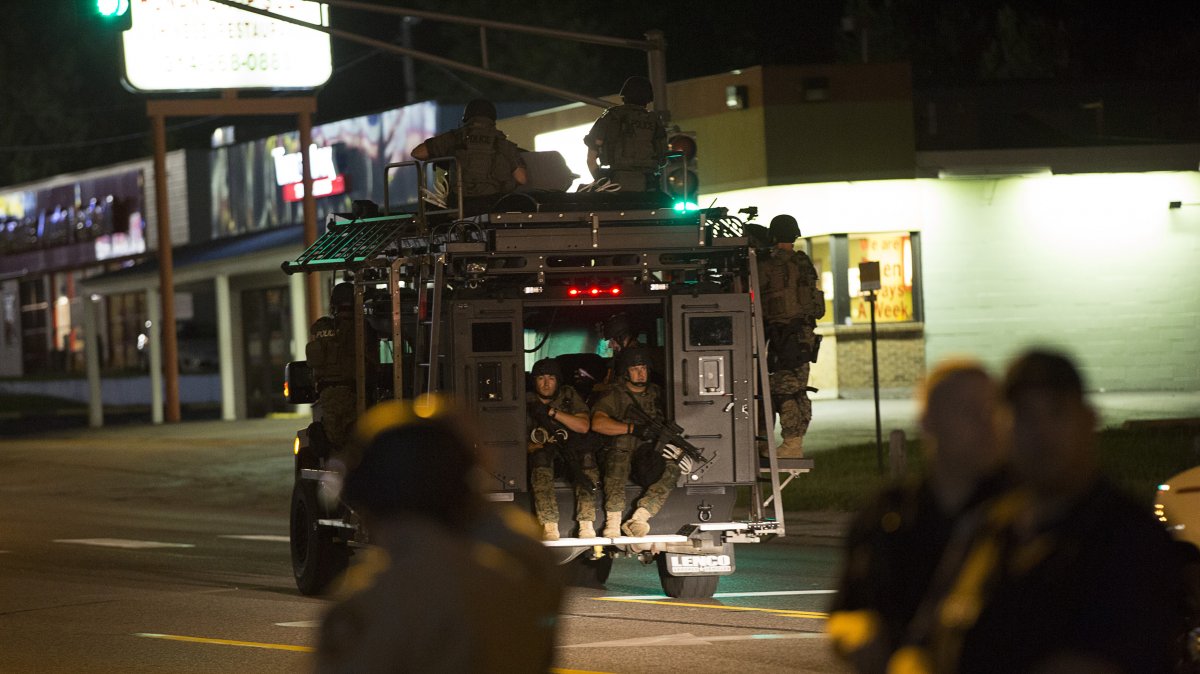 Police officers ride an armored vehicle as they patrol a street in Ferguson, Missouri.

The real festivities began after the shooting as riots began. Store owners stood outside their businesses with baseball bats and guns to protect their livelihoods. Which explains in part the quadrupled sales in guns across the St. Louis area – looks like the good residents there have a lot more God-given sense than previously thought. The ones that didn’t do patrol and watch over their businesses got looted and trashed. Any excuse to rip people off and destroy stuff. Just evil. As Rob at Joshuapundit astutely put it: “There’s nothing that says ‘social justice’ like smashing up and looting a convenience store, a grocery or a Wal-Mart.” Indeed. It’s a free for all baby and the crowd is into letting it burn, while yelling “death to all cops.” 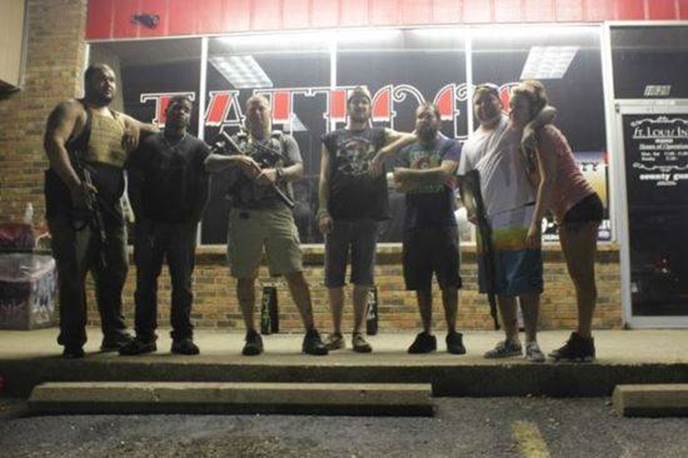 And what would a race riot be without the attendant race hustlers, Jesse Jackson and Al Sharpton (who was heckled upon arrival). Benjamin Crump, Trayvon Martin’s lawyer, swooped in like the vulture he is and declared the dead young man as his client. Disgusting. And of course, I’m not surprised in the least to see Barack Obama and Eric Holder with his jackbooted DOJ step into the mix. They are just dying to have a good ole’ fashioned race war break out. 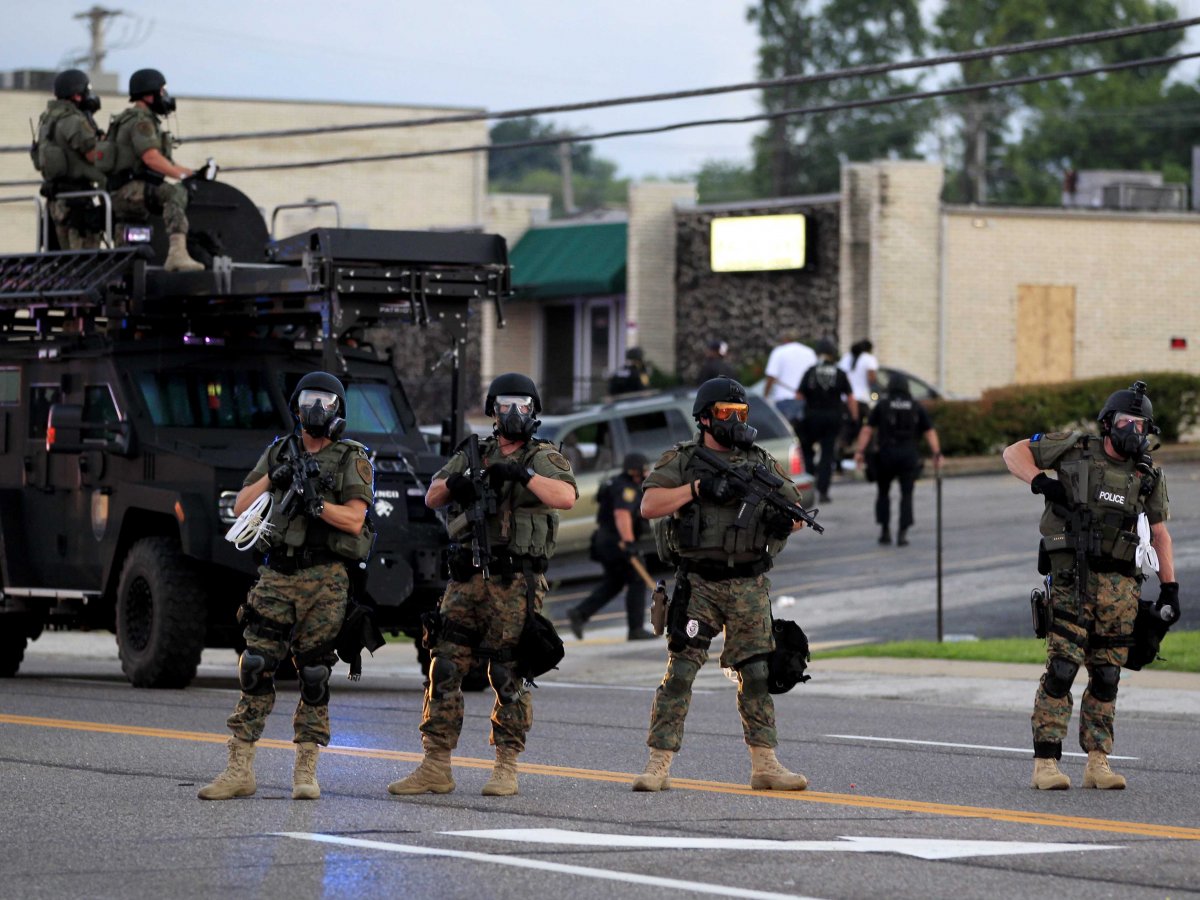 We are now into a third day and night of riots and the latest is that someone else has now been shot by another cop. Fuel to the fire and this baby has yet to sing. The guy pulled a gun on the officer and was shot for it. No tears here, but it will escalate things. Nearby, a woman was shot in the head in a drive-by. She’ll live, but if this keeps up, the bodies will start to pile up. Let the protests begin. 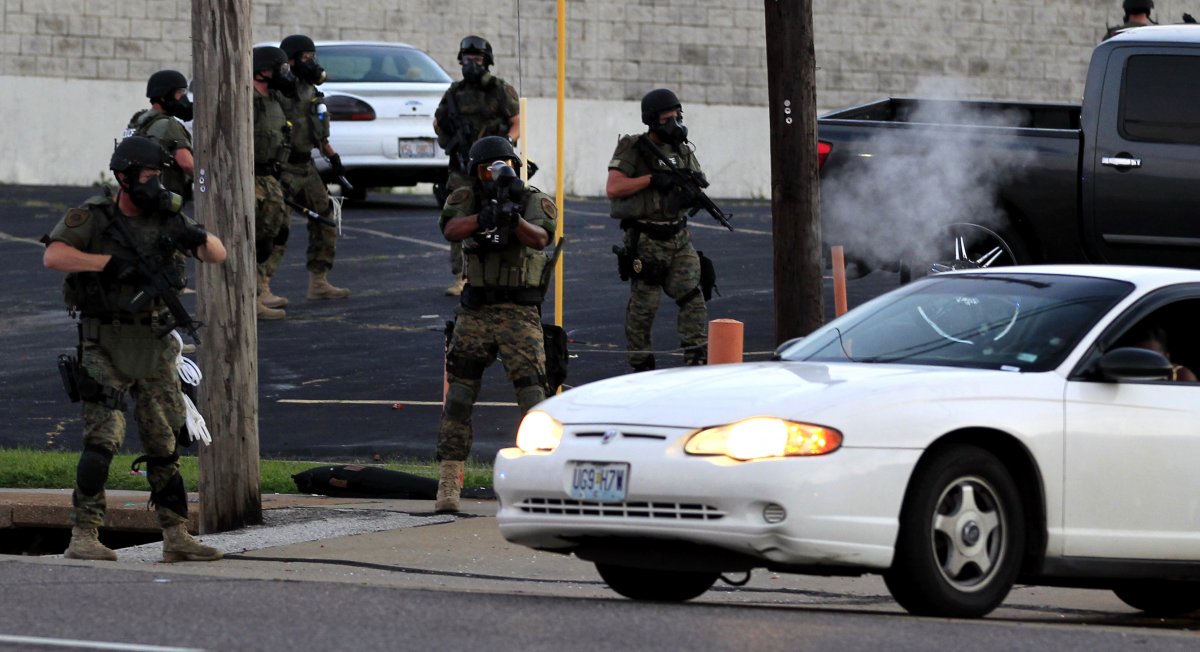 The police point their weapons at a car as it pulls away after tear gas was used by authorities Monday in Ferguson, Missouri.

As awful as the shootings and the senseless waste of life is, the underlying story lies with the police force itself in my eyes. Business Insider has a great piece up on the militarization of the Ferguson police force and it is sobering and frightening.

This is the evil gift of Obama’s governmental control fetish. He has facilitated police forces whose attire is fashioned after the US Marine Corps MARPAT camouflage pattern. If there were not police force patches on the arms, you would swear the US military was descending. These departments have been armed just like the military in preparedness for standing against regular American citizens. Now, I understand calling out all you’ve got to stop riots, but this is ridiculous and deadly.

In fact, these officers are more geared up than the military forces on the ground in various combat arenas. MRAPs and Bearcats — armored vehicles that can withstand IEDs and severe attacks from insurgents hardly seem everyday fare for taking on American unrest. I’m not just talking about SWAT and tactical teams, I’m talking about beat cops and detectives. Why are we arming more heavily to confront our own than enemies in war? Please tell me, because I sincerely want to know. There is no good reason, except to control and intimidate the American people.

Officers are brandishing short-barreled 5.56-mm rifles based on the military M4 carbine, with scopes that can accurately hit a target out to 500 meters. On their side they carry pistols. On their front, over their body armor, they carry at least four to six extra magazines, loaded with 30 rounds each. And these guys have attitude to match. “Bring it. You fucking animals, bring it,” one police officer was caught on video telling protesters.

Not very professional conduct on the officer’s part and not how I choose to remember the men in blue who I have looked up to my whole life. I’m not sure when all of this morphed into the police turning into Obama’s new army. ‘Protect and serve’ has now become ‘us vs. them.’ Ferguson is not a war zone, at least not yet. Americans are supposed to have Constitutional rights and be innocent till proven guilty. This is not martial law. Not yet anyway.

So, now we have the FAA suspending flights over the area because they claim someone is firing at helicopters. How very convenient. The police are threatening reporters as well and protests are supposedly banned. It feels like I woke up in Moscow this morning – maybe I should check my passport. Papers please.

From journalist Radley Balko, author of “Rise of the Warrior Cop“:

In Afghanistan, we patrolled in big, armored trucks. We wore uniforms that conveyed the message, “We are a military force, and we are in control right now.” Many Afghans saw us as occupiers.

And now we see some of our police officers in this same way. “The militarization of law enforcement is counter-productive to domestic policing and needs to stop,” tweeted Andrew Exum, a former Army infantry officer.

If there’s one thing I learned in Afghanistan, it’s this: You can’t win a person’s heart and mind when you are pointing a rifle at his or her chest.

Even more relevant and true here since it is our own military that has us in their sights. When you have ex-military questioning the militarization of the police, you know you’ve got a problem. 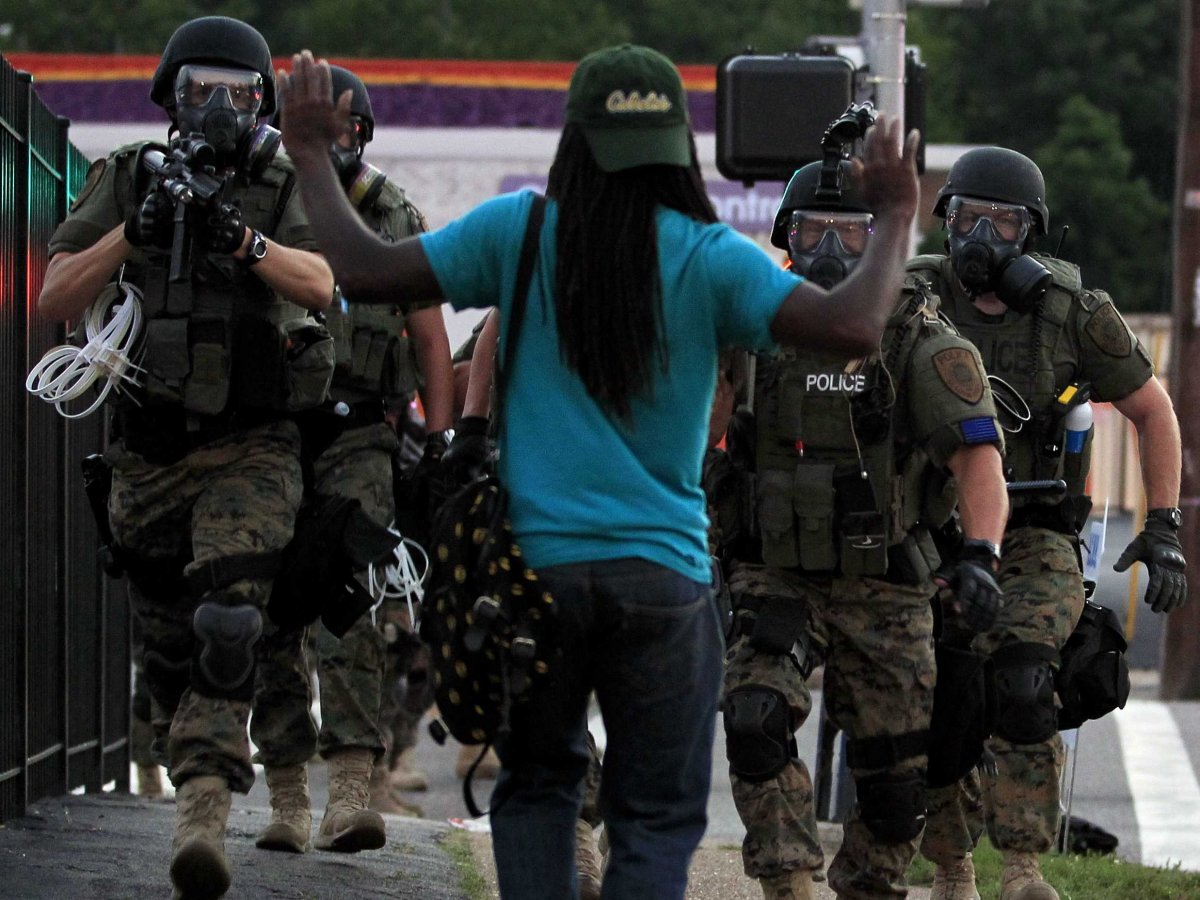 Police wearing riot gear walk toward a man with his hands raised Monday in Ferguson, Missouri.

America better wake up and put a stop to this crap. Some day, and soon, this will come to a place near each of us. Every teeny tiny burg out there now is armed as if they are fighting ISIS in each of their neighborhoods. No doubt there are those just itching to use said force. The militarized police just rolled into Ferguson… next stop, your town USA. 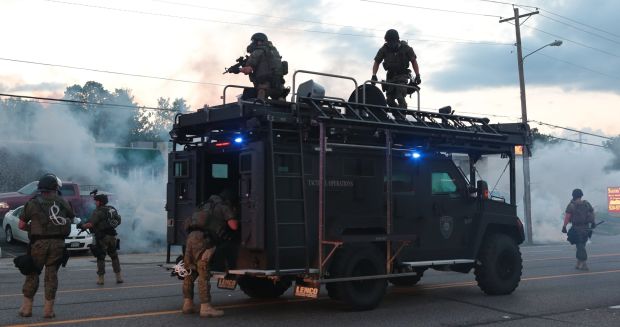 Police fire tear gas and protester throws it back.