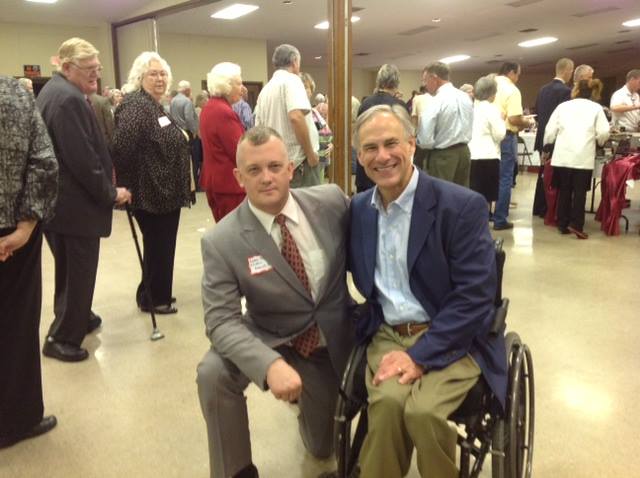 Smith, left, with Greg Abbott, the attorney general of Texas and a candidate for governor this year.

America needs more conservatives like Larry Smith. Look no further than the fact that the Left hates him. Just my kind of guy.

Larry is running for the House of Representatives in Texas’ 34th Congressional District — that’s in Smith County. He’s a a 37-year-old Army veteran who served in Operation Iraqi Freedom. He served as an Army Captain. He’s a Christian, who is happily married with three wonderful children he adores.

“Over the past year I have traveled South Texas and the Valley that makes up the 34th Congressional district. People are discouraged and tired of politicians who only come to the district when they need to be seen to be elected to their job. South Texans are sick of empty promises and tired of being treated as if they are not intelligent enough to manage their own lives.”

“The people here have the same basic needs and wants of all Texans no matter what race, religion, or age. Everyone deserves an even chance to work hard for greater opportunity and prosperity for their family.”

“This district has many different races and economic levels: Czechs, Germans, Blacks, Asians, Hispanics, tradesmen, ranchers, farmers, and business owners… They are all our neighbors and proud Texans who suffer from a bloated government. They are tired of opportunity and prosperity being lost.”

“I ask to be your Representative to go to Washington and work to return the Federal Government to within its Constitutional limits. Let’s work together to restore freedom and reclaim the American dream for ourselves and our children.”

Smith has five criteria for voting for a bill:

1. It is understandable.
2. It applies to everyone.
3. It keeps you free to make the best choice for you and your family.
4. It doesn’t take more money from you.
5. It doesn’t hurt the economy.

His conservative beliefs are right on target. This is a true Constitutional conservative that I can wholeheartedly support. He’s against Obamacare, against over-regulation, he’s for small business, he’s pro-military, against illegal immigration and pro-life. He’s also stands strong against radical Islam and Sharia Law. Combined, his stances make for solid bedrock to stand on to fight for those he represents. Larry Smith has guts and a spine. I would be honored to fight along side him. He’s Texas tough.

I hope that if you can, you will donate to Larry’s campaign. He’s one of us – not entitled or rich. He just wants to be elected and institute Constitutional principals like smaller government and a balanced budget. His Democratic opponent is worth between $1.2 million and $15 million. I’m betting on the larger amount.

Larry Smith is one of the good guys. He’s one of the leaders we have waited and searched for and he needs to be elected. We need him in office and many more of his shared character. Larry is right – politics is like combat. We are in a war to save our nation and all we hold dear. Larry will take the battle to DC and fight for those he represents.