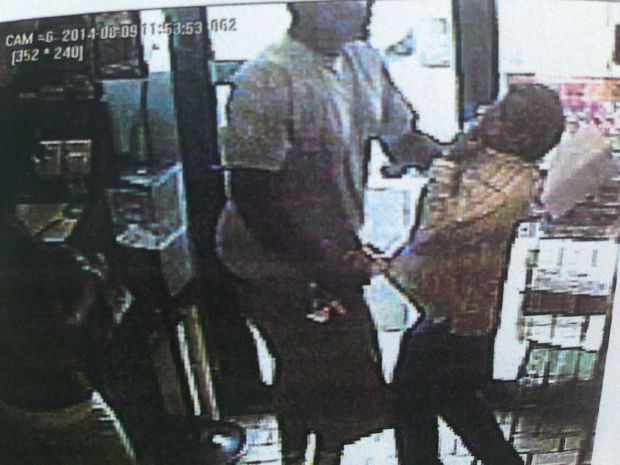 Talk about deja vu Trayvon Martin spin all over again, I could hardly believe my eyes. During a discussion on CNN about the shooting of Michael Brown by a white police officer, in the background was a photo of Brown in a school graduation cap and gown. Give me a break!

Where was the picture from the surveillance video of the 6’4”, 290 pound thuggish Brown grabbing the store clerk by the throat after stealing cigars? The DOJ has advised news outlets not to broadcast the video of Brown assaulting the store clerk and robbing the store, claiming that it might insight violence. Okay, so allow me to make sure I understand the DOJ’s logic. Rather than exposing the true character of Brown, promoting the lie that a white police officer shot a studious innocent black youth who was simply minding his own business will not spark violence. Absurd.

I tip my hat to black conservative, Kevin Jackson who hung tough during a slightly contentious CNN interview. Kevin refused to allow the CNN host to get away with portraying Brown as a “choir boy”. Way to go Kevin! By the way, liberals on the internet have called Kevin a fool.

I had a similar exchange with a reporter during a radio interview about the chaos in Ferguson. However, the reporter during my interview attempted to cut me off at every turn. She had zero tolerance for any other narrative other than white cops across America are shooting young black males at will.

In both Kevin and my interview, the MSM interviewers were incensed and a bit shocked that as black men, we were not all about blaming and resenting whitey. Were we Uncle Toms, stupid or what?

Like in the Trayvon Martin case, the MSM has launched a false narrative. Angelic Michael Brown was murdered by a racist white cop. Period. No amount of facts or truth will cause the MSM to report otherwise.

What I find most disheartening about the MSM’s and Leftist talking head’s coverage of the shooting is that it is all rooted in lies, political correctness and a racist low expectation of black Americans.

The term, “institutional police brutality” is being tossed around. Hogwash! The fact that Michael Brown knew he could walk into a convenience store, take whatever he wanted and assault the store clerk without consequence says that Ferguson thugs have no fear of the police.

Pundits all over TV are scratching their heads about how to stop the violence and looting in Ferguson. The answer is simple. Arrest and lock up the bad guys. Unfortunately, political correctness does not allow common sense solutions. PC dictates that the police behave like impotent social workers, rather than protecting store owners from looters. PC caused police to back off, forcing store owners to arm themselves to protect their businesses from looters. http://fxn.ws/1pmRYi3

The elephant in the room is the MSM’s racist bigotry of low expectations. The MSM have been disproportionately critical of Ferguson police while expressing little rebuke of the thugs and looters. It has been complicit with the DOJ in hiding the character of Michael Brown.

It is as if the MSM and the Left have taken the role of parents of spoiled brat children (black criminals). They refuse to acknowledge the bad behavior of their children and attack anyone who dares discipline them.

As in the scenario of a parent coddling a spoiled child, the MSM and the Left hiding and ignoring bad behavior by black criminals is destructive to the black community.

And another thing, Ferguson residents are being terrorized by thugs and looters, not by the police. http://bit.ly/XhyKQI

As a black American whom liberals have called a stupid N word on numerous occasions for touting my conservative views, I get the feeling the MSM’s unspoken opinion is as followed. N****** have a right to act like n******. America should understand and compassionately tolerant it. This is pure racism and bigotry of low expectations.

Stemming from our legacy of marching with Dr King, we are a conservative, upright and moral people. A majority of black Americans, if given the truth without PC and political spin will come out on the side of justice and the law. The MSM and the Left’s condescension is demeaning and insulting to black America.

Thank God there are faithful black conservatives demanding a higher standard; defending the character and dignity of black America. Black Americans are so much more than who the MSM and Left portray us to be.