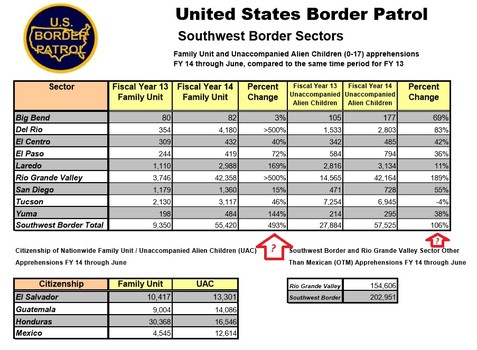 The Conservative Treehouse has done yeoman’s work exposing the Obama administration’s many machinations over the manufactured border crisis. In a report published at Accuracy in Media earlier this month, I described how the Unaccompanied Alien Children (UAC) program of the Department of Health and Human Services has exploded, spending almost $700 million so far this year, more than double that of 2013. Much of the information described in that report was initially dug up by the Treehouse.

As we described in the report, many of these “children” were not in fact children, but young men and women, many of whom were gang members or being actively recruited by gangs. Largely unreported were the 200,000 plus illegal alien families accompanying these youths. The Treehouse has now uncovered evidence of deliberate manipulation of the UAC numbers conducted by the Obama administration.

The U.S. Border Patrol has reported apprehension of 57,525 UACs in 2014, almost double the 2013 number. However another agency, the Executive Office for Immigration Review is tasked with actually confirming these numbers. It counts a total of 20,814, only slightly more than 2013, (20,778), and once again, most of these are not the young children the media has been showing heart-rending photos of. The fact is that there is no crisis of young, unaccompanied children flooding the border. There are entire families flooding the border.

One thought on “Unaccompanied alien children “crisis” exposed as fraud”