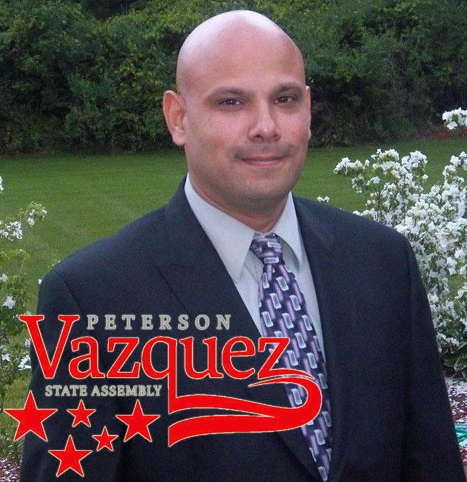 Quoting the Pointer Sisters, “I’m so excited!” Peterson Vazquez is a conservative Republican running for the New York State Assembly.

This Hispanic epitomizes the conservative message we must spread to minorities and low info voters. America is the greatest land of opportunity on the planet. Anyone can achieve their American Dream via education, hard work and responsible choices. Folks, them there are fightin’ words to the Democrats and MSM. Minorities are suppose to act like powerless victims of a racist America, unable to achieve without Democrat lowered standards and entitlement programs.

Vazquez was a school dropout who turned his life around; served 13 years in the Army, a disabled veteran, a husband, a father, a small business owner who started from nothing, a Christian and a community leader, running as a Conservative Republican – a great American Dream story. I know Democrats are repulsed, but I can hardly contain my excitement.

Why did this guy choose to become a Republican? Calm down Lloyd. I see your hand raised. Okay, go head. Answer the question. Vazquez chose the Republican party because it truly is the party for dreamers; people who want more out of life for their families and themselves than food stamps and a free Obama phone.

Boldly articulating conservative principles, Vazquez has captured the imagination of the people of Henrietta, Rochester and beyond. Despite having no money or name recognition, Vazquez won 36% of the vote when he ran two years ago. This time around, his star is rising with a growing base of grassroot supporters.

I am excited folks!

Vazquez is being challenged by dueling Nemeses; Democrats and the GOP establishment. It appears that Vazquez’s conservative principles are an anathema to the local non-supportive Republican party; choosing to ignore him. http://bit.ly/VSA0bS

I realize that running for the New York State Assembly is not a high profile national race. However, my gut tells me that this man has the ability to inspire a younger demographic of minority low info voters with his conservative message. We must bolster Vazquez’s efforts with our prayers and support.

I would like to see a major Tea Party organization host a local rally for Vazquez with national minority speakers such as Katrina Pierson, Herman Cain, Kevin Jackson and myself. I would love to sing and speak at a Vazquez rally. What a great minority outreach opportunity, sharing our stories how we achieved our American Dreams via Conservatism. This could be the start of something big.

Folks, check out his website. http://www.petersonvazquez.com/ Watch his video. http://bit.ly/1lkHEYd You will be uplifted and impressed as I. Then, send this courageous young man a check, wave signs, volunteer or send him a note of encouragement. Catching it from both sides of the political isle, Vazquez needs to know his conservative family across America has his back. Thanks and God bless.