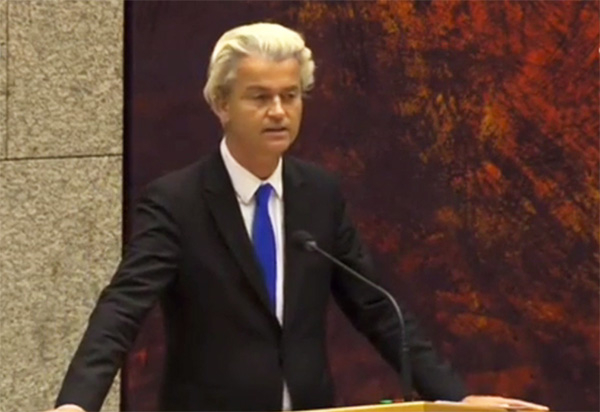 During the past ten years and two days, the ostrich cabinets did nothing. Every warning was ignored. They lied to the people.

Do not prevent jihadists from leaving our country. Let them leave. I am prepared to go to Schiphol [airport] to wave them goodbye. But let them never come back.

Madam Speaker, war has been declared against us.

Madam Speaker, actually I was expecting flowers from you. I am celebrating an anniversary these days. Exactly ten years and two days ago, I left a party whose name I cannot immediately remember. During these ten years and two days. I have been much criticized. Most importantly for always saying the same thing.

My critics are right. Indeed, my message had been the same during all these years. And today, I will repeat the same message about Islam again. For the umpteenth time. As I have been doing for ten years and two days.

I have been vilified for my film Fitna. And not just vilified, but even prosecuted. Madam Speaker, while not so many years ago, everyone refused to broadcast my film Fitna, we can today watch Fitna 2, 3, 4 and 5 daily on our television screens. It is not a clash of civilizations that is going on, but a clash between barbarism and civilization.

The Netherlands has become the victim of Islam because the political elite looked away. Here, in these room, they are all present, here and also in the Cabinet, all these people who looked away. Every warning was ignored.

As a result, also in our country today, Christians are being told: “We want to murder you all.” Jews receive death threats. Swastika flags at demonstrations, stones go through windows, Molotov cocktails, Hitler salutes are being made, macabre black ISIS flags wave in the wind, we hear cries, such as “F-ck the Talmud,” on the central square in Amsterdam.

Indeed, Madam Speaker, this summer, Islam came to us.