Here I want simply to share information and analyses provided by others that will enlightened you – and, in one case, even entertain you.

The subject at hand, first, is the issue of the land in Gush Etzion that has been declared state land – in the process generating a horrified response heard round the world.

Daniel Greenfield, writing in his typically incisive manner as Sultan Knish, addresses this issue with tongue-in-cheek. 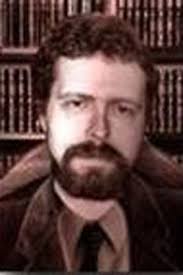 It’s a piece worth reading and sharing:

”There are few weapons as deadly as the Israeli house. When its brick and mortar are combined together, the house, whether it is one of those modest one story hilltop affairs or a five floor apartment building complete with hot and cold running water, becomes far more dangerous than anything green and glowing that comes out of the Iranian centrifuges…

“Forget the cluster bomb and the mine, the poison gas shell and even tailored viruses. Iran can keep its nuclear bombs. They don’t impress anyone in Europe or in Washington. Genocide is a minor matter when in the presence of the fearsome weapon of terror that is an Israeli family of four moving into a new apartment.”

Ari Briggs of Regavim, observing the paucity of solid information regarding this issue, has put together material- including a map – that is exceedingly valuable for anyone seeking to understand what is going on.

From that material (italics in the original, bold added):

[] Nobody lives on this land, neither Palestinian Arabs nor Israelis.

[] This land has been classed as public land since before 1948.

[] In 1967 all public lands including this piece in the West Bank came under Israeli control. As an extra precaution, to ensure the protection of private property rights, the authorities put in place an additional process to double and triple check that no private land was mistakenly included. This process of investigation and final declaration is what the government announced recently. The declaration does not change the status of the land.

[] The land is situated in the Etzion bloc which is acknowledged and widely accepted to be included on the Israeli side of a future land swap in any negotiated peace agreement.

[] The land straddles the 1949 Armistice lines and is in Area C under full Israeli administration and security control based on 1993 Oslo Accords.

[] Pre-1948 there were Jewish communities in the Etzion bloc that were destroyed by the Jordanian Arab Legion and Egyptian Army in Israel’s Independence War.

[] As a general rule in Western countries there is either public land or private land. Thus the concept of ownerless land is not familiar. As a rule a sovereign power owns all land that is not privately owned. This is based on Ottoman land law and British land law and is also enshrined in Israeli land law. The process of final declaration as proscribed by the authorities is in place as an extra protection of private property rights. As such in the case where the sovereign power wants to advance building plans in an area where the land registry record is not complete it has to do an in-depth survey of the land by law, to ensure 1000% that the land is not privately owned.

After decades of due process the land was surveyed and determined to not be privately owned, yet even so a 45 day window of appeal is available by law. 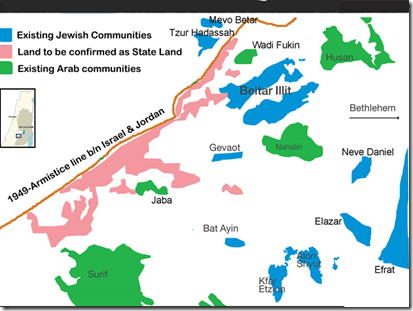 Anyone seeking additional information is welcome to contact me.

Lastly, on the subject, I invite you to see this fine article by international lawyer (and member of the Legal Grounds Legal Advisory Board) Eugene Kontorovich (emphasis added):

“Israel’s declaration of certain open, uncultivated areas near the 1949 Armistice Line as ‘state land’ has been widely mischaracterized as an ‘appropriation’ of private Palestinian land, and a promotion of settlement activity. It is neither.

“A determination that land is ‘state land’ is a factual, administrative finding that does not change the ownership of land. In the West Bank–like in the American West–massive amounts of land have no private owners. There is nothing unusual about this…

“An ‘appropriation’ involves taking something that is someone’s. A designation of land as ‘state land’ requires a determination, based on extensive investigation, that it does not have a private owner. The determination can be challenged administratively and judicially, as Palestinian claimants often do, and sometimes prevail.

“In other words, nothing has been taken from anyone, or given to anyone. Thus a ‘state land’ determination does not create any new facts or change ownership.

”Moreover, designating an area state land does not mean that a Jewish community can be built on it…Authorizing a new residential community would require a vast number of additional administrative and political permissions…

“The hysteria over this announcement illustrates several points. First, it reflects how detached discussions of “illegal settlements” are from international law…”

Switching gears now to what went on in Gaza, I want to provide this important information “Israel vindicated by UN damage assessment in Gaza.” It is so very different from the impression lent by most media reports and I advise saving this for reference (emphasis added):

”An analysis of the damage assessment data collected – on the Gaza War – by the UN Office of Coordination of Humanitarian Affairs (which has never been biased in Israel’s favor), confirms that Israel attacked Hamas targets in a restrained manner.

”Most of the damage concentrated in very limited areas of 25 square meters of less, while most of Gaza was not damaged at all or in a very limited manner.  Less than 5% of Gaza was hit by The Israel Defense Forces.

”The most populated areas of Gaza City, Jabaliya, Khan Yunes, Rafah and Deir el-Balah were disproportionally-undamaged: damaged in a very limited way or not damaged at all.

“The areas highlighted by the UN damage assessment report are compatible with the Israel Defense Forces briefings on the location of Hamas facilities, especially in the Shuja’iya area, which was the arena of the most intense battles.

”While Hamas concentrated its terror facilities…in densely populated urban areas in Gaza, the vast majority of these urban areas were undamaged.”

I’ve been writing about standing strong for Israel.  Here is information that provides clarity and enables you to stand up for Israel in letters to the editor, talkbacks and the like.

In closing, some good news:  Israel and Jordan have signed a $15 billion natural gas deal.  This benefits Israel economically and creates ties of Jordan to Israel that can only serve us well: