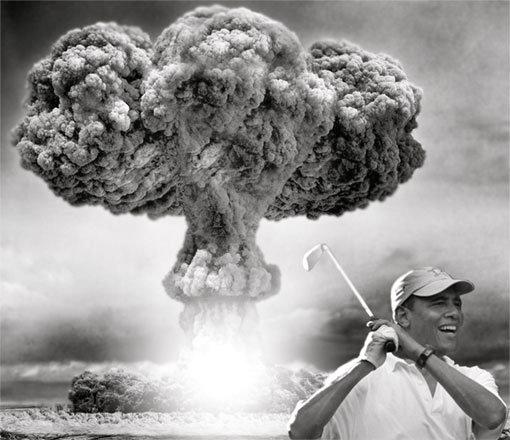 Raising awareness, one drop at a time. 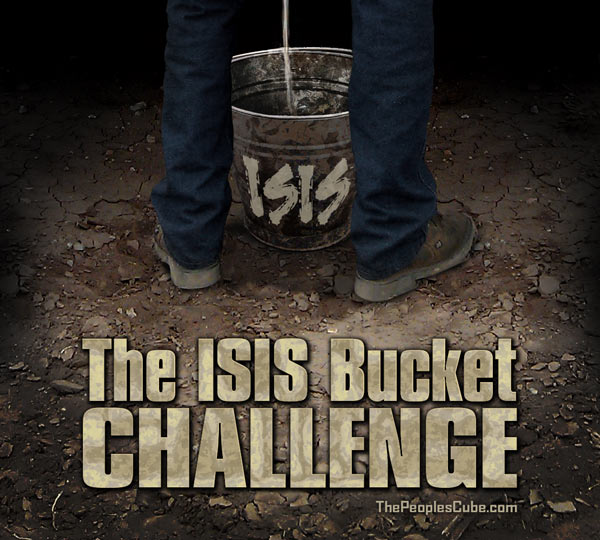 The ISIS Bucket Challenge: a life-saving activity involving dumping buckets of piss on the heads of Western pacifists with “Coexist” bumper stickers to raise their awareness about them actually having those heads, at least until ISIS shows up and chops them off.

* * *
Special thanks to Comrade General Secretary for the idea.

“What did the President know and when did he know it?” – Senator Howard Baker (R-TN) during the Watergate Scandal

“If a JV team puts on Lakers uniforms, that doesn’t make them Kobe Bryant.” – President Barack Obama dismissing ISIS in a January 27th, 2014 interview – right after they had just taken over Fallujah, Iraq.

“I know in Western countries this is vacation period but when people die, you must return from vacation.” – French Foreign Minister Laurent Fabius asking that President Obama return from Martha’s Vineyard to meet with the EU to plan a strategy to stop the Islamic State, August 14th, 2014.

This week, we had a tie in the Council category which, I as Watcher, have to break. Fortunately, this was an easy choice. On the one hand, there was Joshuapundit’s It’s Time To Give Abbas What He’s Asking For, my take on what I thought a fitting response from Israel would be to Palestine’s unelected dictator Mahmoud Abbas’s threats to try and coerce the UN into a resolution gifting him all of Judea and Samaria.

But the other was a marvelous piece by Nice Deb, West Point Report: Obama Watched And Did Nothing As ISIS Threat Grew – Why?, an in-depth examination of exactly what our prevaricator-in-chief knew about the Islamic State, formerly known as ISIS and how he essentially ignored it. I’ve always really liked what Deb writes, but this one’s special. Here’s a slice:

A new report from the West Point counterterrorism center says the Obama administration ignored warning signs as ISIS grew and trained over a four-year period following the US withdrawal from Iraq.

As President Obama dithers about whether to strike the Islamic State’s sanctuary in Syria, a report by the Combating Terrorism Center at West Point shows how we got to this point. Obama simply overlooked the “JV” team until it was ready for terrorism’s Pro Bowl.

Instead, he was focused on getting us out of Iraq and creating a power vacuum that the terrorist group was all too willing to fill.

“ISIL did not suddenly become effective in early June 2014,” the report states. “It has been steadily strengthening and actively shaping the future operating environment for four years.”

The Islamic State’s rapid expansion into Iraq was “the result of years of patient preparatory operations,” wrote the report’s author, Michael Knights of the Washington Institute for Near East Policy.

United States intelligence officials tried to claim they were blindsided back in June when fighters from the Islamic State of Iraq and al-Sham (ISIS) seized two major Iraqi cities and sent Iraqi defense forces fleeing. “With U.S. troops long gone from the country,” the story goes, “Washington didn’t have the spies on the ground or the surveillance gear in the skies necessary to predict when and where the jihadist group would strike.”

What a load of malarkey.

As the West Point report notes, ISIS leader Abu Bakr al-Baghdadi “re-booted” the group in 2010 into a “highly motivated cadre of quality light infantry forces,” beginning a nationwide campaign of car bombings in Iraq in 2013.” Their attacks were reported on and evident to anyone with an internet connection.

In August 2013, the Iraqi government even reached out to the Obama administration for help.

Zebari returned home empty-handed, ignored by an Obama administration more intent on keeping a campaign promise to withdraw from Iraq than in dealing with the new terror threat. Zebari’s requests were apparently lost between all those fundraisers and rounds of golf.

Earlier this year, Iraq continued pleading for help. As we noted, according to a June 11 piece in the New York Times, then-Iraqi Prime Minister Nouri al-Maliki met on May 11 with American diplomats and Gen. Lloyd Austin, head of Central Command, asking the U.S. for the ability to strike IS using drones.

If that wasn’t doable, al-Maliki said that he would approve U.S. drone strikes or airstrikes. That plea also fell on deaf ears.

The question is – why? Obama knew there was an uber-terrorist group rampaging through Syria, with its sites set on the fledgling democracy of Iraq – where so many American troops had made the ultimate sacrifice to secure. Was it not in America’s interest to stop the growing menace before it got to Iraq?

Its “blitzkrieg” into Iraq was due less to the failure of Iraqi forces than to IS’ methodical training, preparation and planning — sort of like the Wehrmacht’s advance into France in 1940.

Their blitzkrieg was also due to the Obama administration’s funneling of advanced weaponry to ISIS infested rebel fighters in Syria – ostensibly to help them topple the Assad regime. The Obama administration began funneling the weapons from Libya after Qaddafi was overthrown, murdered, and dragged through the streets by Islamists in 2011.

In our non-Council category, the winner was Ivy Mike Cafe – #Ferguson – When Assholes Collide, submitted by Nice Deb. I should warn some readers that you’re dealing with NSFW language here, but it’s a pretty cogent analysis of what happened in Ferguson, Missouri… and why.

Here are this week’s full results. Only Simply Jews, enjoying a brief hiatus, was unable to vote this week and was not subject to usual the 2/3 vote penalty for not voting: