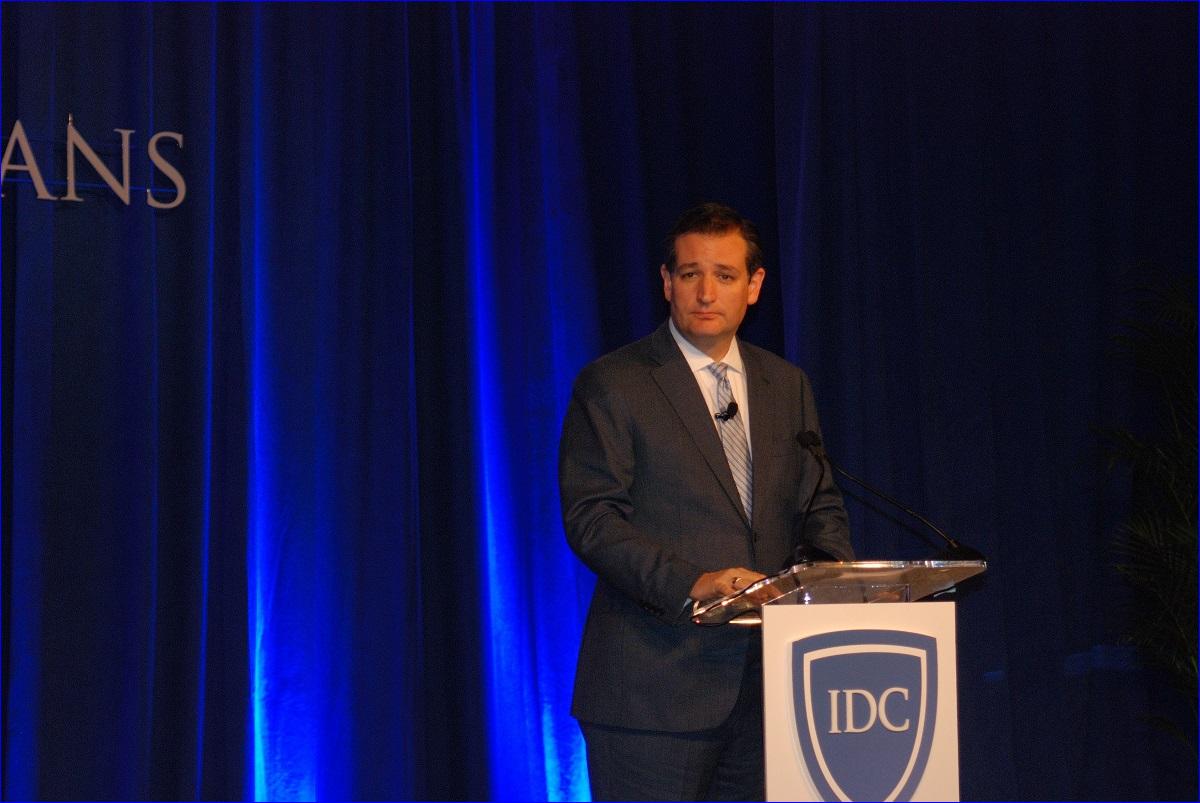 I have seen a great number of despicable displays of bigotry, racism and sheer hatred towards Jews, Christians and Conservatives… especially in the last few years since Obama took office. But this just takes the cake and pisses me off. Ted Cruz was the keynote speaker at the new “In Defense Of Christians” organization’s dinner in Washington, DC last night. He was booed off the stage when he spoke in defense of Israel. This organization is supposedly made up of Palestinian Christians. I have severe doubts about it – it is either infiltrated by Muslims or is a Progressive tool of hate. Check out the video yourself:

Ted Cruz is a man of Christian principles and did exactly the right thing. I couldn’t be prouder of him. He stated that hatred, bigotry and opposition to Israel drove him to leave the event. If only others had the spine and fortitude to do exactly what Cruz did. We live in dark times where “never again” has morphed into “never mind.” Hate against Israel is now being flaunted everywhere you look and across the planet. I personally do not know one Christian who feels this way, so I have strong, strong doubts about the actual composition of this group. But it was fitting it happened in Washington, DC, wasn’t it?

Here is the transcript of Ted Cruz’s comments at the event:

Good evening. Today we are gathered at a time of extraordinary challenge. Tonight we are all united in defense of Christians.

Tonight we are all united in defense of Jews.

Tonight we are all united in defense of people of good faith who are standing together against those who would persecute and murder those who dare to disagree with their religious teachings.

Religious bigotry is a cancer with many manifestations. ISIS, Al Qaeda, Hezbollah, Hamas, and their state sponsors like Syria and Iran, are all engaged in a vicious genocidal campaign to destroy religious minorities in the Middle East.

Sometimes we are told not to lump these groups together, but we have to understand their so-called nuances and differences. But we shouldn’t try to parse different manifestations of evil that are on murderous rampage through the region. Hate is hate and murder is murder.

Our purpose here tonight is to highlight a terrible injustice, a humanitarian crisis. Christians are being systematically exterminated.

In 1948 Jews throughout the Middle East faced murder and extermination and fled to the nation of Israel. And today Christians have no better ally than the Jewish state.

Cruz: Let me say this: those who hate Israel hate America.

Cruz: And those who hate Jews hate Christians.

Cruz: And if this room will not recognize that, then my heart weeps that the men and women here will not stand in solidarity with Jews and Christians alike who are persecuted by radicals who seek to murder them.

AUDIENCE: nobody said we hate the Jews…the meeting is for the Christians…

AUDIENCE: …is not fighting Jews, it is fighting Christians…

I will say this–

THE PRESIDENT OF IDC: please respect the…

Cruz: I am saddened to see some here, not everyone, but some here are so consumed with hate–

I now support Ted Cruz more than ever. Cruz is seeking support to fight ISIS and radical Islam who are committing genocide against Christians throughout the Middle East. They are being slaughtered just as Jews have been throughout history. To stand against Jews, is to stand against Christians. Period. If those were indeed Christians in the audience, they are hateful hypocrites of the worst sort and are an abomination in the eyes of the Lord.

What is wrong with people? Has the world lost its mind? Have we fallen into a bottomless pit of evil and despair? This travesty last night is beyond terrifying in its implications for Israel and I might add, for Christians worldwide. When Cruz stated that we have no better friend and ally than Israel, the booing started in earnest. How cravenly wicked. Attendees accused Cruz of highjacking the event for Israel. Spoken like true antisemites. And it is true that those that hate Israel, hate America. Look across the globe – take an honest look and it is obviously true and has been forever.

I did see where IDC disavowed those who did this, but I wonder still… Here’s the official statement from IDC:

In Defense of Christians President Toufic Baaklini issued the following statement in response to a disruption at the Inaugural Summit Gala Dinner:

As Cardinal Rai so eloquently put it to the attendees of the In Defense of Christians’ inaugural Summit gala dinner: ‘At every wedding, there are a few wedding crashers.’ In this case, a few politically motivated opportunists chose to divide a room that for more than 48 hours sought unity in opposing the shared threat of genocide, faced not only by our Christian brothers and sisters, but our Jewish brothers and sisters and people of other all other faiths and all people of good will.

Tonight’s injection of politics when the focus should have been on unity and faith, momentarily played into the hands of a few who do not adhere to IDC’s principles. They were made no longer welcome.

When we set out to form In Defense of Christians, many in the foreign policy and faith-based communities said such an effort was impossible. That it would be too difficult to bring such a diverse group of Christian sects, religious and human rights organizations together to draw attention not only to the plight of the deteriorating situation facing our Christians brothers and sisters, but also to the plight of all people of faith, in the Middle East who are suffering.

For more than 48 hours, our initial IDC conference was successfully bridging divides of faith, language, geography and politics. It has not been easy, and not without challenges. Tonight’s events make clearer than ever, that the In Defense of Christians is desperately needed in a world that remains divided to the point where even the most fundamental value of life and human dignity are cast aside.

We remain undaunted and focused on achieving our goals.

Hate is hate and murder is murder as Cruz said after this occurred. We are watching another holocaust take form — one that will slaughter Jews and Christians alike if we do not find the will and means to fight and defeat radical Islam. Cruz put it bluntly:

“I came to this event tonight to help shine a light on the tragic persecution and slaughter of Christians by ISIS and Islamic radicals throughout the Middle East. American leaders have been far too silent as to this horrific evil,” Cruz said. “But bigotry and hatred have no place in this discussion. Antisemitism is a corrosive evil, and it reared its ugly head tonight.”

Cruz did not take the easy way out — he stood on principle. How many do you see doing that these days? And in the political arena no less. It’s a pity someone didn’t scope out the attendees better, but it really showcases what Cruz is made of.

However, there were some clues here that would have indicated that the dinner was an Islamic pit of vipers. The event was funded by a controversial Clinton donor that featured pro-Hezbollah and pro-Assad speakers in Washington, DC. Again, Cruz’s staff should have known that. It also says everything you need to know about Hillary Clinton. This whole event was probably meant to bolster the Assad regime. The Clinton donor was Lebanese-Nigerian billionaire Gilbert Chagoury. Chagoury pledged $1 billion to the Clinton Global Initiative in 2009. He is also the backer of Lebanese politician Michel Aoun, Hezbollah’s top Christian ally in the country, according to US diplomatic cables published by WikiLeaks. It may very well be that Cruz did know the makeup of the speakers and wanted to poke the Islamist badger so-to-speak. That takes guts.

A spokesperson for Cruz said the senator still planned to speak at the conference despite the controversial participants because he was committed to raising awareness about the persecution of Middle East Christians. “Sen. Cruz is appearing at the In Defense of Christians event tonight because he wants to take every opportunity to highlight this crisis, the unspeakable persecution of Christians,” said Catherine Frazier. “America has been silent for far too long, and we need to speak with a united voice against this horror.”

I agree with West that Cruz should be careful though on who we stand united with. These people are not the ones to stand with. As West pointed out, the conference was a dangerous infiltration of pro-tyranny, Islamo-fascist and terrorist individuals. Radical, fascist scum. All these rich Islamists need to go know themselves in the biblical sense, if you get my drift.

One other thing… when the likes of Sen. Debbie Stabenow (D MI) are asked to speak, you might want to take a cold, hard look at exactly what the intent of the conference is. Regardless of the evil element in the audience and speaking around him, Cruz decided it was the principle of the thing and put his big boy pants on to confront those who are full of hate. There were a number of speakers there who did the same:

Lebanese Information Center president Joseph Gebeily, a Lebanese Christian who staunchly opposes Assad, said he was “shocked” by many of the invited speakers, but decided to attend the conference after he learned members of Congress would be present.

“I decided we should be present and not let the bad representatives of Middle East Christians hijack the true message of Christianity, which is basically democracy, tolerance, co-existence, inclusiveness,” said Gebeily.

“It wasn’t a very quick and easy decision, but since we were given this opportunity, I said let’s go and see and face those advocates of tyranny and crimes against humanity.”

Cruz had the presence of mind and faith to speak the truth and stand his ground. Those are presidential qualities — a taste of leadership that Obama has never experienced and never will.

A Cruz spokesperson said the Texas Senator made the decision to headline the event despite some of the associated individuals: “because he wants to take every opportunity to highlight this crisis, the unspeakable persecution of Christians.”

I couldn’t be more proud of the Senator. Texas strong and Texas true — Ted Cruz takes a stand: those who hate Israel, also hate America.

27 thoughts on “Cruz: Those Who Hate Israel, Also Hate America”