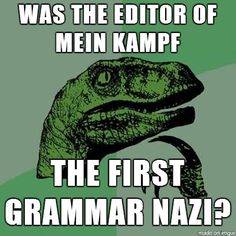 I was arguing with a moron on Twitter earlier. He kept using There/Their/They’re and Too/To wrong, couldn’t spell, and didn’t know how commas worked (including at one point when he ended up accidentally calling himself a gay moron) so I started correcting him so he’d get all rage-sputtery. He called me a grammar nazi. My response was “I’m more of a grammar libertarian. You’re a grammar rapist.”

Because I freely admit to violating the rules all the time, I’m hereby proclaiming the existence of Grammar Libertarians. So I believe in freedom of grammar, but I also believe in the Non-Aggression Principle of Grammar, which requires you not to be a complete friggin’ idiot with your spelling and punctuation.

So now we have a middle ground between the hated Grammar Nazis and the incoherent Grammar Rapists. You are welcome, internet.

I posted that on Facebook yesterday, but decided it needs to go on the blog too. I think this is brilliant. For too long there hasn’t been a middle ground! I make my living by communicating with written words, yet I despise the statist Grammar Nazis nearly as much as I loathe the incoherent babbling of Grammar Rapists. I’ve long wanted to mock them, without becoming them.

Normally when I’m arguing on the internet there are two types of grammar extremists. The people who are so incredibly stupid that you wonder how they are actually capable of operating a computer. You might find yourself saying: How are his clumsy ape thumbs able to tweet? Is English his first language? Were his parents first cousins? Your stupidity is making my eyes bleed. If so, those are the Grammar Rapists.

On the other hand there are the Grammar Nazis, who would immediately point out that I used a colon incorrectly in the paragraph above. These are the annoying types who will look at your 10,000 word, well researched, essay which totally debunks their position, and they’ll dismiss the whole thing because you had a dangling participle.

Nobody gives a shit about dangling participles.

Since the Dawn of the Internet the non-psychotic masses have been forced to read exchanges that go something like this:

Normal Person: I can’t even read that.

GR: U now what i meant GRAMMER NAZI!

Normal Person: So you can see from the giant post above and  the fourteen different links to respected sources I provided that everything you said is factually incorrect. I’ve included all of my math and calculations for peer review. I’ve documented your mistakes, and even used footnotes. You are definately incorrect.

From now on I am a Grammar Libertarian!

Yet at the same time I vow to obey the Non-Aggression Principle of Grammar. My grammar should not infringe on other people’s grammar rights. I alone am responsible for any grammar crimes I commit. If I commit acts of grammar rape I should be held accountable and make restitution to those who I have wronged.

Who will join me?

You may take our contractions but you will never take our FREEDOM!