By: John Peters
(Mr. Peters is a 2nd generation Syrian-American. He has been an attorney for 34 years.)
Hat Tip: Dick Manasseri 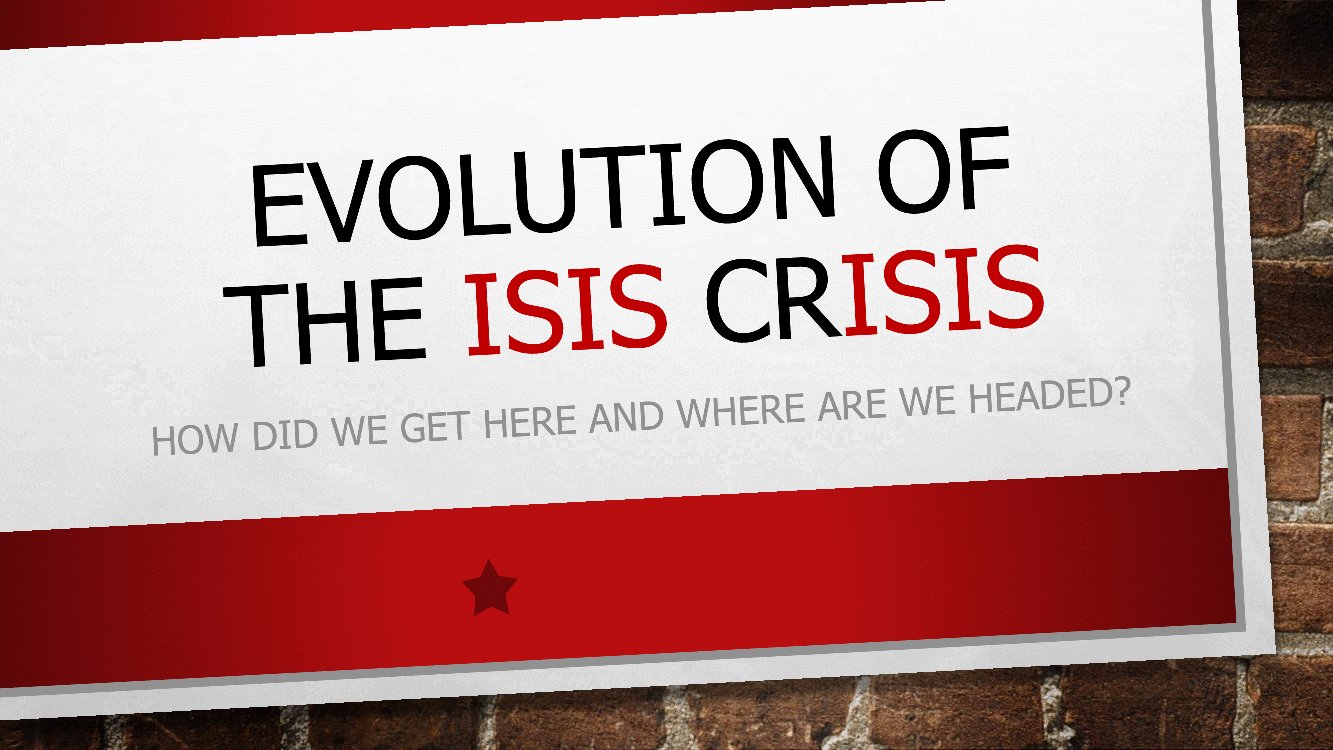 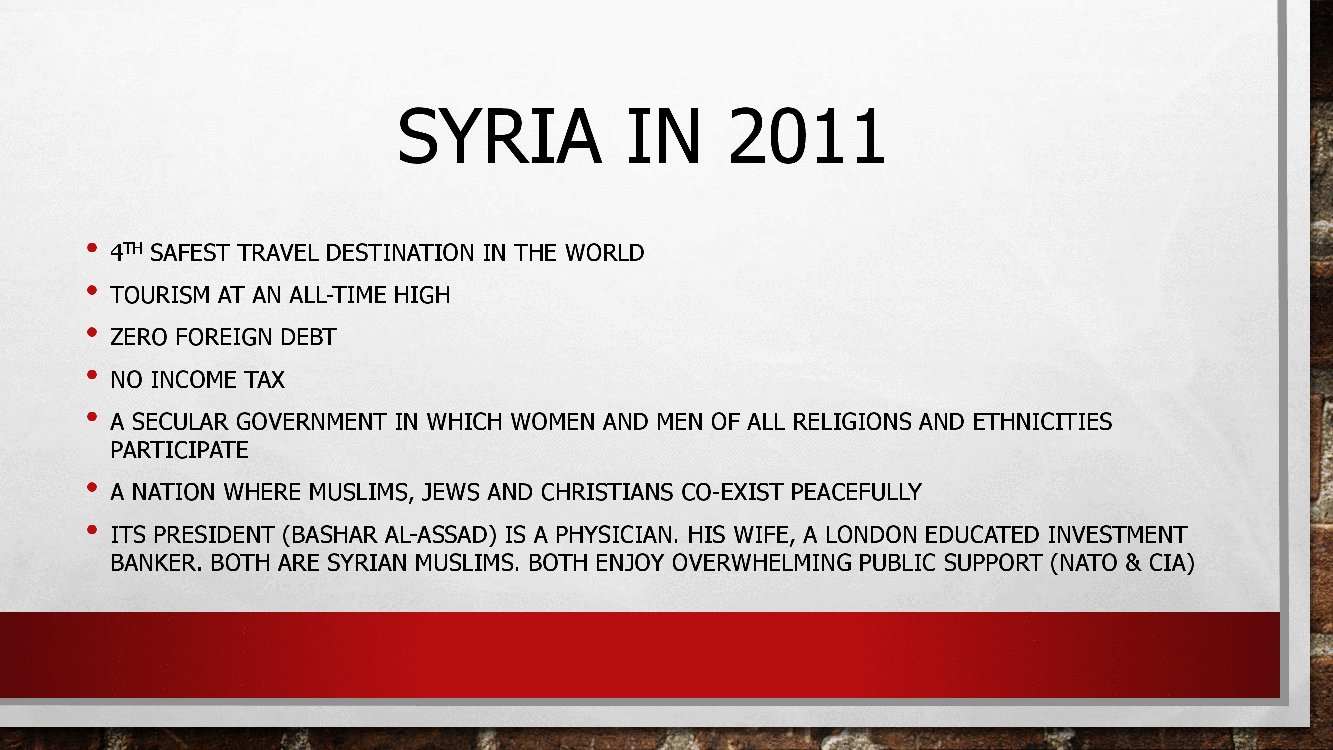 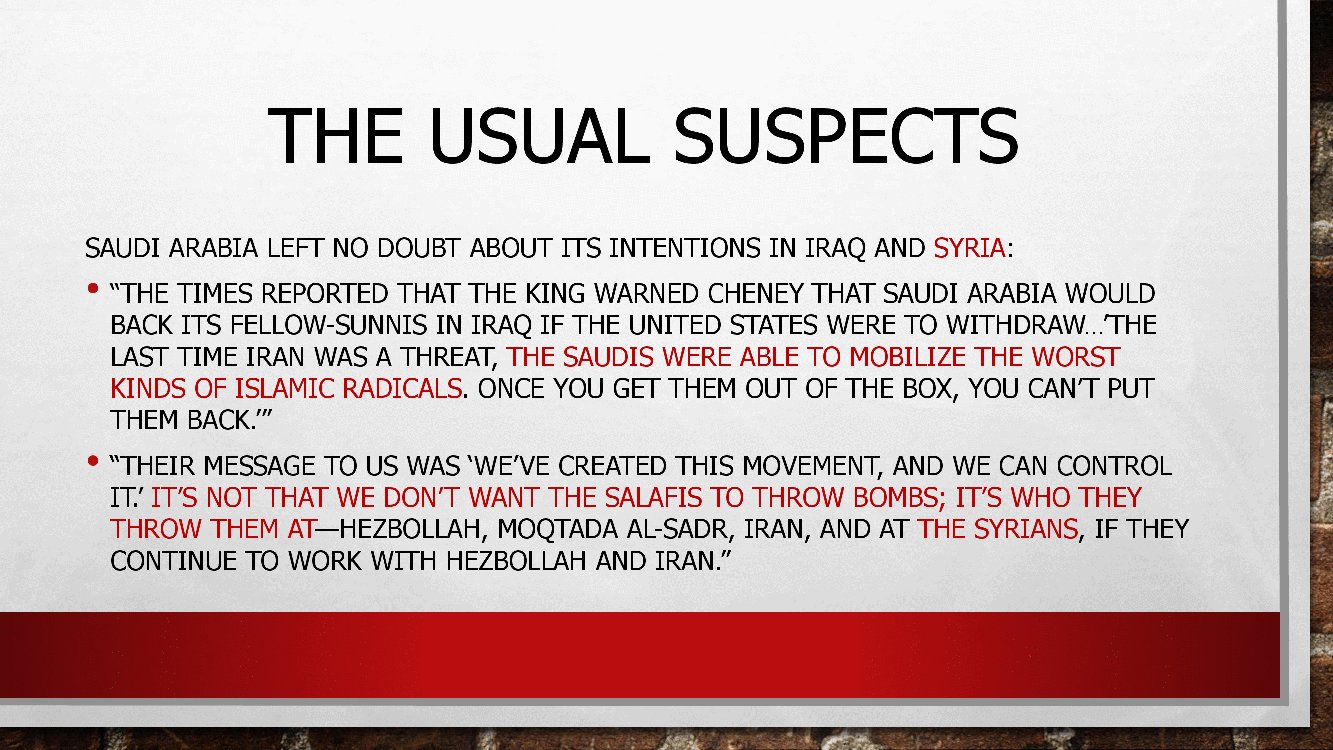 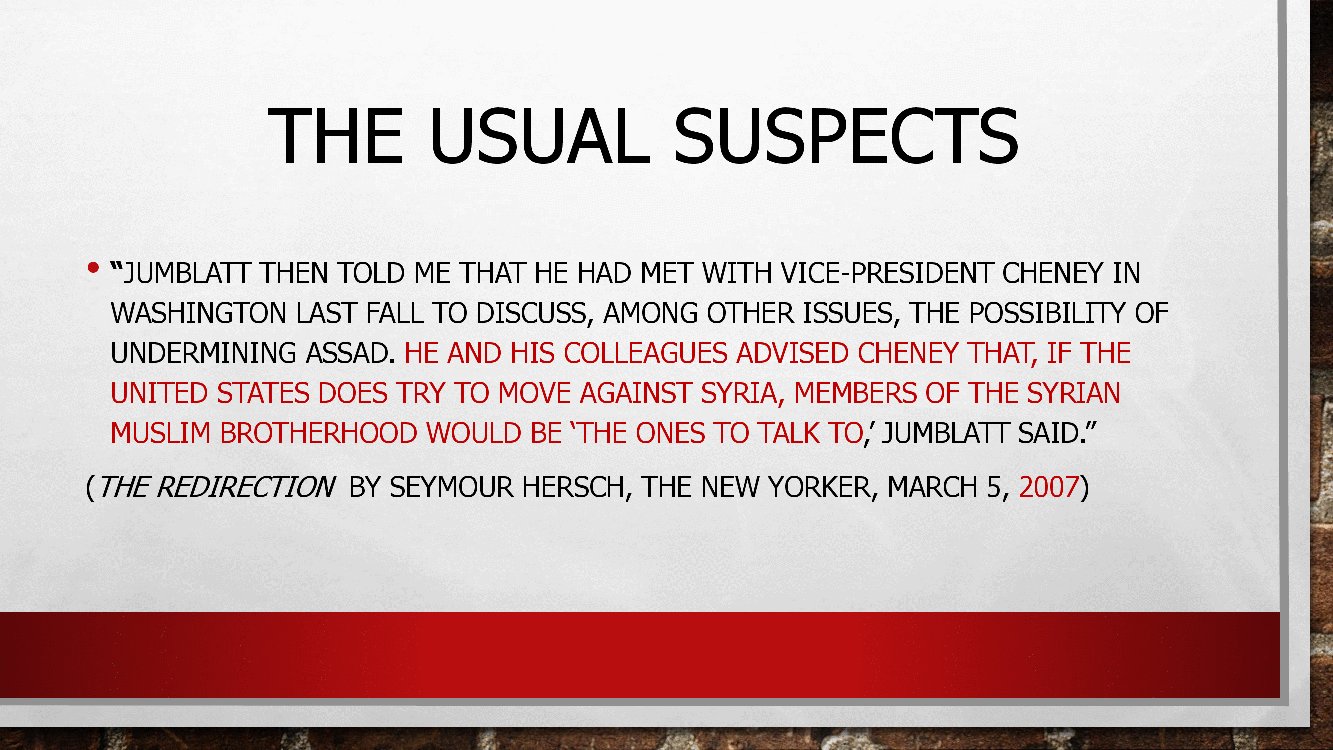 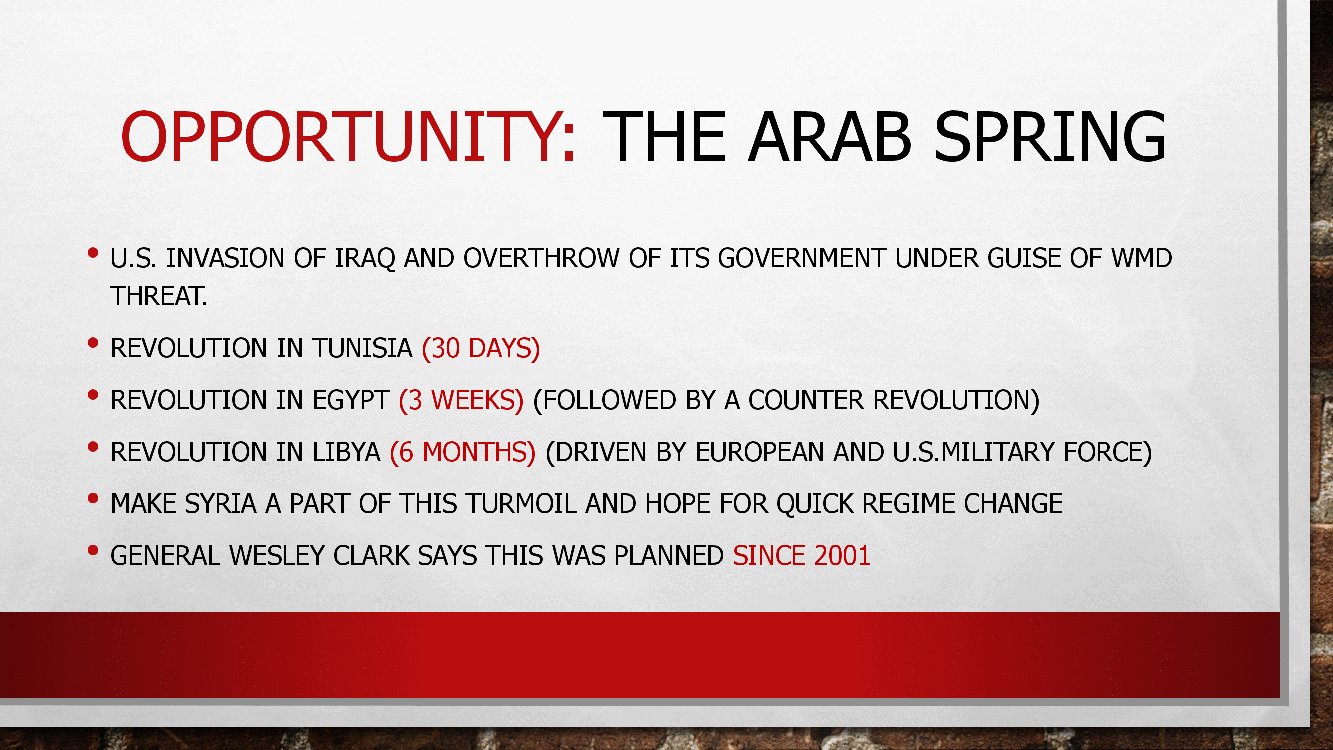 END_OF_DOCUMENT_TOKEN_TO_BE_REPLACED

I have known Trevor Loudon for a number of years now. It has been my greatest honor to work with him and call him my friend. A better man you will not find and a more ardent patriot does not exist. He has tirelessly traveled the US, spreading information and the message that our government, our institutions, our very way of life here in America has been infiltrated by Leftists — i.e. communists.

From New Zealand, to all over the US, Trevor has devoted his life to exposing the enemies within our government that are trying to bring the freest nation the world has ever known to her knees. Trevor has worked tirelessly to open American’s eyes to what is transpiring in what will be seen in history as, at the very least, the greatest subversive coup of American government to ever be attempted on a broad scale.

Trevor and I both know how hard the last six years has been on Americans. We are all struggling just to survive. Many of us have done this at a cost to our livelihoods, our families and our own well-being. Trevor has never given it a second thought. He is a warrior and a patriot in every sense of the word and there is not a soul on this earth that I trust more to have my back when the fighting comes. So, it is no small thing that we come to you now and ask that you donate to the movie that Trevor has in production currently which exposes The Enemies Within – Communists, Socialists & Progressives in the U.S. Congress.

This is no minor feat we are attempting. We need to raise $100,000 to help with production and distribution. We face many of the same hurdles that Dinesh D’Souza has faced in his battles to expose the truth about Barack Obama and those who surround him.

Help us win this fight and bring our message to millions across the nation and in fact, across the planet. We can defeat the enemies within, but we need all of you to help us do it. Trevor knows that if America falls, the world will fall to a new Axis of Evil: Russia, China and Iran. We are at war and we are asking you to help us arm ourselves in the greatest battle of our lives — the fight to expose The Enemies Within – Communists, Socialists & Progressives in the U.S. Congress and take America back and ensure her freedom.

Thank you all and see you in the trenches!

Expose The Enemies Within Idiegogo Campaign

Exposing the Communists, Socialists, and Progressives within the U.S. Congress

Short Summary
The Enemies Within zooms in on the best kept secret of modern politics. Almost no one is aware of the fact that fewer than 20,000 U.S. communists, socialists and extreme progressives are able to influence the politicians, and even write the laws that control the lives of over 300 million Americans.

What We Need & What You Get
We need a minimum of $100,000 to get us started and we will get some folks to match funds. Our full budget is $400,000. This production will take about 1 year from start to completion. It will take thousands of man hours for research, filming, and distribution.

The Impact
Your contribution will allow us to dedicate a full year into making a high quality film that will change minds and motivate people to get involved and take this country back from the left.

Risks & Challenges
Trevor is a grassroots investigator and activist. The establishment and news outlets do not want to report what Trevor is going to expose. The establishment does not like to fund films that do not fit their narrative. It will be difficult raising the funds to make this film, but it will not be hard to get the film out to the people.

Fanfare!! It’s time to present this weeks’ statuette of shame, The Golden Weasel!!

Every Tuesday, the Council nominates some of the slimiest, most despicable characters in public life for some deed of evil, cowardice or corruption they’ve performed. Then we vote to single out one particular Weasel for special mention, to whom we award the statuette of shame, our special, 100% plastic Golden Weasel. This weeks’ nominees were all certainly contenders, but by a nose, here is our winner… 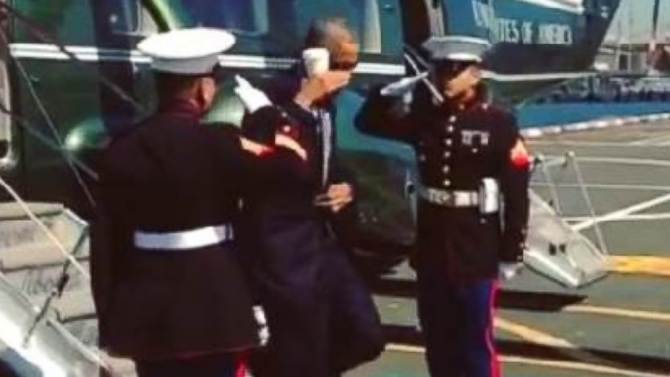 The Noisy Room: Barack Obama for his ‘Latte Salute’ of his Marine guard this past week. It was one of the most disgraceful, disrespectful things I have ever seen. The salute reveals Obama’s true feelings towards the military and his contempt and utter disrespect for our warriors. How very un-presidential… how very un-Commander-in-Chief.

While it is protocol for U.S. service members in uniform to salute the Commander-in-Chief, it’s not required for a civilian president to salute back, military experts say. Ronald Reagan is thought to have set precedent for the practice back in 1981, so this is also a slap at Reagan. The salute is not required, but expected by Americans and the military. Since Obama is also left handed, some looked at this gesture as calculated. He did it with his right hand. By the way, Obama is a tea drinker normally, not a coffee drinker.

The Independent Sentinel: I have to name Barack Obama again. He blamed the intelligence community for his refusal to act on the ISIS threat during a 60 Minutes interview Sunday.

“Well, I think our head of the intelligence community, Jim Clapper, has acknowledged that I think they underestimated what had been taking place in Syria,” Obama told Steve Kroft of 60 Minutes.
Everyone in the world who is paying attention knows he’s lying.

Congrats, Mr. President! The statuette of shame is yours and richly deserved!

Accepting the award for the president was one Armando Perez, who claimed he was the president’s golf caddy. The only ID he had on him was a Mexican Matricula Consular card, but I figure if that’s good enough for ICE and the DHS it’s good enough for us. And at least he wasn’t coughing and didn’t have any running sores or anything…

Well, there it is!  Check back every Tuesday to check out our Weasel of the Week nominees and every Thursday to see who walks off with the statuette of shame!

This letter is being sent to you on behalf of the Qatar Awareness Campaign Coalition. The purpose is to inform you and the public of the activities of Qatar, the country which owns Al Jazeera, the network which employs you both as journalists. Additionally, both of you are graduates of Harvard University: Mr. Shure of Harvard College and Mr. Mora of Harvard Law School. Harvard is in a multi-year partnership with the Qatar Foundation to host an annual workshop.

We urge to you read the information below, which includes evidence that Qatar is arguably the preeminent sponsor of terror in the world today. It is a benefactor of the genocidal armies of ISIS, al Qaeda, and Boko Haram; it is involved in Taliban narcotics trafficking through a relationship with the Pakistani National Logistics Cell; and profits from operating a virtual slave state. Qatar is involved in terror operations from Nigeria to Gaza to Syria to Iraq.

So the public understands why this letter is addressed to you both, who are American citizens and correspondents for Al Jazeera, here is pertinent background on the Doha-based network.

In light of Al Jazeera’s consistent and vocal support for the Muslim Brotherhood, we ask that you consider the attached sourced report on Qatar’s activities. The links cited are vetted and credible sources. We hope you take the time to verify the truth of the statements for yourself.

After doing so, the Coalition of the Qatar Awareness Campaign calls on you to exert due influence on the Qatari government to cease any type of involvement in all forms of Islamic terrorism, slavery, and drug trafficking!

** Select signatures as of 9/27. The Qatar Awareness Campaign Coalition is comprised of more than 25 journalists, national security experts, publishers, and independent researchers. To view all Coalition participants, please visit the Campaign’s website.