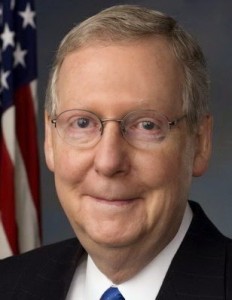 One of the key races for control of the U.S. Senate is the seat presently occupied by Republican Senator Mitch McConnell, the Senate Minority Leader, and Democrat Alison Lundergan Grimes, who is currently the Kentucky Secretary of State. Mitch McConnell is a 30-year veteran representing Kentuckyin the U.S. Senate. Before running for the Senate in 1984 McConnell was a Deputy Assistant Attorney General under President Gerald R. Ford. In 1977, McConnell was elected the Jefferson County, Kentucky Judge/Executive. Alison Lundergan Grimes is the daughter of former Kentucky Democratic Party State Chairman Jerry Lundergan. Prior to running for Secretary of State in 2011, Grimes was a practicing attorney in Lexington. While Mitch McConnell and Alison Lundergan Grimes have both been engaged in a lifetime of politics, McConnell forged his career on his own as Grimes coasted along on her father’s coattails boasting that she has been working for the Democratic Party since the day she was born. McConnell’s long career in Washington has made him a recognized establishment Republican with knowledge and clout and had he not made disparaging remarks against the Republican-leaning Tea Party he would likely have not found himself in a heated primary. But now after winning his primary Kentucky Republicans are supporting his reelection. Grimes was likely chosen to run against McConnell solely due to McConnell’s primary with the thought that Republicans had been weakened by the experience. Whatever the reason, the media seems fixed on the sex appeal of the liberal Democrat befitting my observation that last night we had the debate between the fox and the hound. 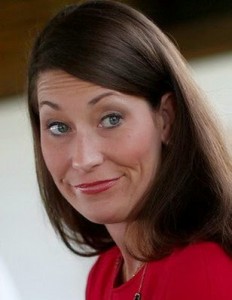 Watching the debate between Kentucky’s U.S. Senate candidates Democrat Alison Lundergan Grimes and Republican incumbent Senator Mitch McConnell one thing is certain: it was nearly impossible to get any clear, concise answers from the Democrat. Grimes was asked several questions last night ranging from everything that included how will you create new jobs to who did you vote for in 2012 for president. Her responses were nothing but obfuscation and distortion. She tried to twist every response into an attack on Republican Mitch McConnell instead of giving simple replies. Her answer to how will she create new jobs was to increase the minimum wage despite the fact that the business community agrees this will cause more unemployment. Then she added how many times Mitch McConnell had repeatedly voted against it. Her now classic retort to her vote for president in 2012 invoked a lengthy spiel about the constitutional privilege to a secret ballot, blah, blah, blah, ignoring the fact that there was only one Democrat running for president that year.

Several times Grimes mentioned her endorsement by the United Mine Workers Union in spite of Barack Hussein Obama’s declared war on the coal industry but then Mitch McConnell replied that the United Mine Workers Union is a working partner and member of the pro-Democrat American Federation of Labor. In 2008 the UMWU and the AFL wholeheartedly endorsed Democrat Obama but after Obama famously declared that his EPA policies would bankrupt any coal-fueled powerplant and the mine workers in Kentucky started losing their jobs, these unions sat out the 2012 elections without making any presidential endorsements. But the unions did endorse every other Democrat who supported Obama and voted for his bills.

While the Republican Party presently holds the minority position in the U.S. Senate, Alison Lundergan Grimes still feels they are responsible for all the bad bills that came into law. Never mentioning that the healthcare wreaking Affordable Care Act known as ObamaCare was voted into law only by Democrats and that not one single Republican voted for it. Another thing about the debate that was missing was an admission that Democrat Majority Lead Harry Reid has been sitting on over 300 bills that were passed by the Republican controlled House of Representatives. And of course, Grimes never mentioned how she would successfully oppose the absolute control of her parties’ majority leader should the Democrats remain in control of the Senate after the November elections.

Even the moderator of the PBS broadcast had to repeat his questions to Grimes in an attempt to make her answer. All to no avail. Considering the pro-Democrat slant of Public Broadcasting I found that somewhat surprising. Alison Lundergan Grimes admittedly is an admirer of the Clintons and seems to have adopted slick Willie’s tactics to avoid being boxed in a corner. After the debate was over I still had no idea where she stood on the issues.