You might not realize that untold number of Americans have already been killed by illegal aliens.

You certainly wouldn’t have heard that from the mainstream media. 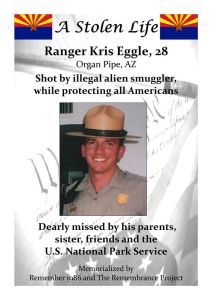 The Remembrance Project is bringing national attention to these under-reported killings through its “Stolen Lives Quilt” dedicated to slain Americans.

The quilt is a visual memorial to the memory of ordinary Americans that have been killed by illegal aliens.

Maria Espinoza, founder & national director for The Remembrance Project, reminds us that, “There is a death toll to progressive policies like amnesty and open borders. Lives of moms, dads, and children are being stolen by criminals and gangs from the Third World that now live within our open borders.”

Each story of murder is terrifying, but more so now, because known criminals and gangs are entering America as a result of the immigration policy of Barack Obama, who last year released 36,000 convicted criminal aliens from detention, and the push for amnesty by Michigan Gov. Rick Snyder.

Politicians may value the new voters even if they are not quite kosher.

Ebola, beheadings, children dying from the EV-68 virus, lone wolf jihadists, and attacks on soldiers and police by illegals are now screaming from our own headlines as reminders that this “isn’t Kansas anymore.”