Last night there was a conference, “Israel Returns to the Temple Mount,” at the Menachem Begin Center in Jerusalem – this is an annual event of the Temple Mount Faithful. It was neither a large nor a raucous event.

Rabbi Yehuda Glick, Temple Mount activist, was a key presenter: He showed a video filmed on the Mount that morning that offered evidence of Palestinian Arabs trying to frighten Jewish visitors away.  Deeply devoted to Har Habayit, he gives tours on the Mount and educates on the ancient and on-going Jewish connection to it.  One would not always get that impression from the media, but he is a gentle man, and from what I know of him, a very special human being. 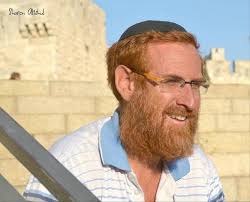 When Rabbi Glick left the Center, he was approached by an Arab dressed in black garb.  The Arab asked him – in Arabic-accented Hebrew – if he was Yehuda Glick; on receiving an affirmative answer, he pulled out a gun, shot him three times point blank in the chest, and rode away on a motor cycle.

Rabbi Glick was still conscious when taken to Sha’arei Tzedek hospital.  His condition was designated as critical, unstable and he was rushed into surgery.  This morning he is serious, but stable. Yet doctors say his situation is still precarious.  My understanding is that he has been placed in an induced coma, to allow his body to rest and heal. Please God, let him live.

A suspect, Mu’taz Hijazi of the neighborhood of Abu Tor, was identified rather quickly. This is a Palestinian Arab who had been sentenced to Israeli prison for terror activity during the second intifada; he was on a security watch because of suspicions that he has been involved in other terrorist activity since his 2012 release. When he got out of prison, he had declared in an interview:

“I am happy to return to Jerusalem. I wish to be a thorn in the throat of the Zionist plan to Judaize Jerusalem.”  (Emphasis added)

What I had assumed when I first learned that he was identified was that information about him was out on the Jerusalem streets in Arab areas and was picked up very promptly by Israeli intelligence. That might be, but I’ve since learned something else that is fairly incredible:

Mu’taz Hijazi worked for the Terasa restaurant that is located inside of the Begin Center.  He actually had on his work uniform when he accosted the rabbi.  Apparently he had spoken to fellow workers about his irritation with Yehuda Glick, and it is apparent that he had specifically sought him out.

I must assume that he misrepresented his background when applying for the job, but he clearly was not given a sufficient background check.  (If indeed he was given a background check at all.) This should not have happened, plain and simple.  It is all the more astonishing because the Begin Center regularly hosts conferences and seminars, which largely represent a nationalist position.

There are some very huge lessons to be learned here.

A special anti-terrorism unit went to Hijazi’s home in the Abu Tor neighborhood of Jerusalem, to arrest him.  When he resisted arrest and instead shot at the officers from inside the house, they returned fire and killed him.

“The assassination attempt on Glick is an act of Palestinian vengeance, in response to what is happening in Jerusalem,” declared a spokesman.

As I write, the Temple Mount is closed. To everyone. Until further notice. This is the way Israeli security is handling what is clearly a highly volatile situation.  The city is on high alert, with an additional bolstering of security forces ordered by the prime minister.

Netanyahu continues to say that the status quo on the Mount will be sustained. I will want to come back to this for further examination of the issues.

Mahmoud Abbas’s response to the closure (which, you will observe, applied equally to all), was the usual hostile and inciteful blather.  It was delivered by his spokesman Abu Redeina:

“This dangerous Israeli escalation is a declaration of war on the Palestinian people and its sacred places and on the Arab and Islamic nation.

“We hold the Israel government responsible for this dangerous escalation in Jerusalem that has reached its peak through the closure of the Al-Aqsa mosque [Temple Mount] this morning.

“This decision is a dangerous act and a blatant challenge that will lead to more tension and instability and will create a negative and dangerous atmosphere.

“The state of Palestine will take all legal measures to hold Israel accountable and to stop these ongoing attacks.”

In his statement today, Netanyahu singled out the international community for criticism, and very properly so:

.”A few days ago, I said that we were facing a wave of incitement by radical Islamic elements and by [Mahmoud Abbas] who said that Jews must be prevented from going up to the Temple Mount by any means possible.

Let me return briefly here to the insults leveled at Bibi Netanyahu by one or more unnamed high level US officials who were cited in an article by Jeffrey Goldberg.

The response of the US government, in my opinion, has been sorely inadequate. There was backpedaling but no apology.  No notice that the official who spoke about our prime minister in grossly insulting terms would be relieved of his responsibilities.  And certainly no denial of what was reportedly said. It was, rather, more of a “gee, we didn’t give him permission to say this and he wasn’t speaking for us.”  The terms that had been used are being referred to as “inappropriate” and “counterproductive.”

State Department spokeswoman Jen Psaki said, “If this issue comes up we will make sure it is clear it’s not reflective of the secretary’s views.”

And precisely what does that mean: “if this issue comes up”? It was in print and widely quoted.

Kerry reportedly is going to “explain” the administration viewpoint to Netanyahu.

The very best commentary I’ve seen with regard to this situation has been from Commentary editor, Jonathan Tobin.

In “Obama, Not Bibi, created U.S.-Israel Crisis,” he wrote (all emphasis added):

“Since Barack Obama became president, The Atlantic’s Jeffrey Goldberg has been a reliable indicator of administration opinion about foreign-policy issues. Like some other journalists who can be counted on to support the president, he has been the recipient of some juicy leaks, especially when the White House wants to trash Israel’s government. But Goldberg and his ‘senior administration sources’ reached a new low today when he published a piece in which those anonymous figures labeled Israeli Prime Minister Netanyahu a ‘chickenshit’ and a ‘coward’… the story is, as Goldberg rightly characterizes it, a genuine crisis in the relationship. That much is plain but where Goldberg and the talkative administration members are wrong is their belief that this is all Netanyahu’s fault. Their attacks on him are not only plainly false but are motivated by a desire to find an excuse that will be used to justify a drastic turn in U.S. foreign policy against Israel.

“The administration critique of Netanyahu as a coward stems from its disgust with his failure to make peace with the Palestinians as well as their impatience with his criticisms of their zeal for a deal with Iran even if it means allowing the Islamist regime to become a threshold nuclear power…But President Obama and his foreign-policy team aren’t just annoyed by the prime minister. They’ve come to view him as public enemy No. 1, using language about him and giving assessments of his policies that are far harsher than they have ever used against even avowed enemies of the United States, let alone one of its closest allies.

“So rather than merely chide him for caution they call him a coward and taunt him for being reluctant to make war on Hamas and even to launch a strike on Iran. They don’t merely castigate him as a small-time politician without vision; they accuse him of putting his political survival above the interests of his nation.

“It’s quite an indictment but once you get beyond the personal dislike of the individual on the part of the president, Secretary of State Kerry, and any other ‘senior officials’ that speak without attribution on the subject of Israel’s prime minister, all you have is a thin veil of invective covering up six years of Obama administration failures in the Middle East that have the region more dangerous for both Israel and the United States. For all of his personal failings, it is not Netanyahu—a man who actually served as a combat soldier under fire in his country’s most elite commando unit—who is a coward or a small-minded failure. It is Obama and Kerry who have fecklessly sabotaged a special relationship, an act whose consequences have already led to disaster and bloodshed and may yet bring worse in their final two years of power…

“So why is the administration so angry with Netanyahu? It can’t be because Netanyahu is preventing peace with the Palestinians. After the failure of Kerry’s fool’s errand negotiations and the Hamas missile war on Israel, not even Obama can think peace is at hand. Nor does he really think Netanyahu can stop him from appeasing Iran if Tehran is willing to sign even a weak deal…

“The real reason to target Netanyahu is that it is easier to scapegoat the Israelis than to own up to the administration’s mistakes.

“Despite the administration’s insults, it is not Netanyahu who is weak. He has shown great courage and good judgment in defending his country’s interests even as Obama has encouraged the Palestinians to believe they can hold out for even more unrealistic terms while denying Israel the ammunition it needed to fight Hamas terrorists. While we don’t know whether, as Goldberg believes, it is too late for Israel to strike Iran’s nuclear facilities, it is Obama that Iran considers weak as it plays U.S. negotiators for suckers in the firm belief that the U.S. is a paper tiger that is not to be feared any longer.

“If there is a crisis, it is one that was created by Obama’s failures and inability to grasp that his ideological prejudices were out of touch with Middle East realities.

“The next two years may well see, as Goldberg ominously predicts, even more actions by the administration to downgrade the alliance with Israel. But the blame for this will belong to a president who has never been comfortable with Israel and who has, at every conceivable opportunity, sought conflict with it even though doing so did not advance U.S. interests or the cause of peace. No insult directed at Netanyahu, no matter how crude or pointless, can cover up the president’s record of failure.”