The young woman who was knifed to death by a terrorist in Gush Katif yesterday – Dalia Lemkus, 26, from Tekoa – was laid to rest today. People who know members of the family describe all of them, including Dalia, as warm, caring, giving people.

Nachum Lemkus, Dalia’s father, said that the murder “will not break our stand, and our commitment to our country. He murdered you because you were a Jew living in Israel.”

Michal, Dalia’s sister, urged everyone to keep on with what they are doing, unafraid:  “Don’t give them the satisfaction, the satisfaction that they managed to stop and prevent us from living our lives.”

Courageous and dignified people here in Israel. Ah, would that the world saw this.

Almog Shiloni, the 20 year old IDF sergeant who was knifed repeatedly by a terrorist yesterday, has succumbed to his wounds in spite of the dedicated attempts by doctors to save him. 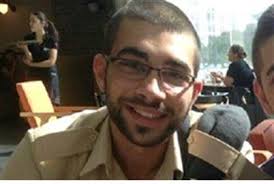 I hope it will be understood when I say that it was perhaps a mercy that he died.  Yesterday I was haunted by the information that had been provided by the first medic who had arrived to treat Shiloni: He had so many knife wounds that they couldn’t be counted.  How he must have suffered, and how fragile his damaged body would have been had he lived.

What strikes me, what I long for the world to understand (although it chooses not to), is that we are dealing with an evil here that transcends a decision by Palestinian Arabs to kill Jews for political purposes.  That decision alone would be immoral and horrific.  But to keep stabbing this young soldier, over and over and over?  What deep-seated, obscene anger rests inside this terrorist.  An anger that certainly transcends the political issues of “occupation.”  It is, as I stated above, evil.  Consummate evil.

Shiloni was buried today in the military cemetery on Mount Herzl, Jerusalem; about a thousand people came to honor his memory.  A graduate of the first Platoon Commanders’ Course of the Nahal Haredi battalion of the IDF, he made history with his induction to the very first combat unit in the Israeli Air Force made up of religious soldiers.

Rabbi Dov Lifshitz, of the Nahal Haredi Rabbis NGO, who knew Shilon, described him as a God-fearing man, a commander who was admired by his subordinates. “My heart breaks over his murder…”

The terrorist who killed Shiloni is handcuffed to his bed in a hospital in Tel Aviv. Police are doing extensive interrogation.

Hamas had apparently taken credit for this attack.  I had read yesterday that the killer of Dalia Lemkus was also Hamas-affiliated, but have since seen reports that Islamic Jihad has taken credit.

I am seeing a whole lot of commentary and analysis about what we are dealing with here in Israel.  And there are certain points I feel it is important to make. Never mind that I and others have made these points before.  People need to be reminded. The points need to be reinforced:

[] This is not about “the occupation.” It is about intimidating and weakening Jews and the Jewish state.

[] Negotiating a “two state solution” will not bring peace to this area. Quite the contrary.  A Palestinian state at Israel’s border would generate a lethal situation for Israel.

[] It is not spontaneous.  It is being well choreographed and organized and instigated by various Palestinian Arab elements.

There is yet another point to be made: concessions to violent Palestinian Arabs will not bring a respite from violence. When we make those concessions, we are perceived as weak and thus make ourselves more vulnerable to additional violence.  The reverse is required.

We have evidence of the need for a tough stance in a new report from the Palestinian Media Watch:

”At least three times in recent weeks, Mahmoud Abbas’ advisor on Religious and Islamic Affairs and the Palestinian Authority’s Supreme Shari’ah Judge, Mahmoud Al-Habbash, has made statements showing that the PA agrees with Hamas’ religious belief claiming Islamic sanctity over all of the State of Israel. In one of his statements, Al-Habbash used the same language as Hamas does in its charter…

“This designation of all of Israel as “waqf ” has far-reaching political ramifications as it prohibits and precludes any authentic PA peace treaty with Israel.”

There are actions that are being taken now that indicate a toughening of our stance.

[] In both instances yesterday, family members of the terrorists were taken into custody.  This may serve to intimidate the terrorists, and may serve to provide information.  Very often, terror – or at least association with terrorist organizations – is a family affair.

[] Plans are being put in place for the demolishing of the homes of the terrorists and their families.  This is something we used to do, and then stopped doing in the spirit of Oslo. See what it got us, that we were “nice guys” on this.

There are a dozen other things that might, and should, be done. (Emphasis added)

Danny Danon (Likud) has some suggestions:  “Now is the time to put into operation plans that forbid the entry of Palestinians into Israel, the expulsion of illegal infiltrators to Gaza, an end to the VIP conditions that [Mahmoud Abbas] and his government enjoy, and an immediate end of the transfer of funds to the Palestinian Authority.”

MK Moti Yogev (Habayit Hayehudi) insists that those responsible for terrorism must be treated as an enemy rather than as a partner: “the Arabs have lifted their heads thanks to the incitement of Abbas and the Palestinian Authority, and are now perpetrating terrorist attacks. War is war.

“Let the Cabinet meet periodically to evaluate the situation and make decisions. Grant the Israeli Defense Forces and Israeli police the tools, the execution policy, the ability to open fire, and especially the backup of soldiers and policeman, so that even in the case of error, we can defeat terrorism and restore security to Israel.”

MK Shuli Mualem-Rafaeli (Habayit Hayehudi) says that government officials have not been serious in their response, as evidenced by their reliance on defensive measures such as concrete barriers instead of proactive ones.

Changing the mindset is what matters here: calling this a war and treating Abbas as an enemy, rather than as someone the world tells us is our “peace partner.”

Defense Minister Moshe Ya’alon has warned that we are going to be seeing additional attacks such as those that have just taken place, or, at least, attempts to carry out such attacks.  Israel, he said, is in “the midst of an escalation” of terror.

“…successful stabbings and ramming attacks usually prompt other copycat attacks. This is a stressful period and we should behave accordingly. Our working assumption is that anyone who has committing a terror attack crossing his mind, will likely do it, and therefore it seems we’ll see more events like this.”

However…“We cannot allow this escalation to develop, and therefore we increased forces in the West Bank and on the seam line to prevent the passage of illegals into Israel.”

Reports Alegmeiner: “some 500 crack troops of the Golani Brigade’s 51st Battalion are being redeployed from the Golan to the Judea and Samaria Division. Together with other experienced infantry units, some 1,000 troops in total are being redirected to the area.”

Netanyahu is moving ahead with plans to revoke the citizenship of anyone who calls for the destruction of the State of Israel.  Good move. Let’s see it followed-through.

With all of our talk about getting tough and recognizing our enemies, we’ve continued to extend a humanitarian hand to those enemies, adopting policies that might be interpreted as tremendously moral or just plain nuts, depending on your perspective. Certainly we act as no other nation does:

We have just supplied the PA and Hamas with Ebola detection kits. This may be quite appropriate, when we consider what the risks of Ebola are.

But how about this: Halamia Shcata, 60, of Gaza, has cancer and has been admitted several times to Israeli hospitals for treatment – most recently last week.  She is the sister of Hamas official Mousa Aba Marzouk.

Or this: Last month the daughter of Hamas leader Ismail Haniyeh was brought to an Israeli hospital for treatment.

They speak against us, and act to kill us, and we treat their relatives.

Yesterday I wrote about the importance of making distinctions between the Palestinian Arabs and Jordan.  Today I share this:

“In an effort to counter the rise of the Islamic State (ISIS) and its effect on her borders, Jordan has imposed new rules on Muslim clerics.

“In a mandatory meeting held at an auditorium in Zarga and attended by hundreds of Muslim clerics, Jordan’s Minister of Islamic Affairs, Hayel Dawood, ordered imams to preach moderate Islam – or else.

“’You clerics are our ground forces against the extremists,’ Havey Dawood told them.  ‘Once you cross the line, you will not be let back in.’”

Lastly for today, I want to point out an article of importance by Dr. Moti Kedar, “Why and When was the Myth of al Aksa created?”

“Arafat, himself a secular person (ask the Hamas!), did exactly what the Caliphs of the Umayyad dynasty did 1300 years ago: he marshaled the holiness of Jerusalem to serve his political ends….

“Since the holiness of Jerusalem to Islam has always been, and still is no more than a politically motivated holiness, any Palestinian Arab politician would be putting his political head on the block should he give it up.”