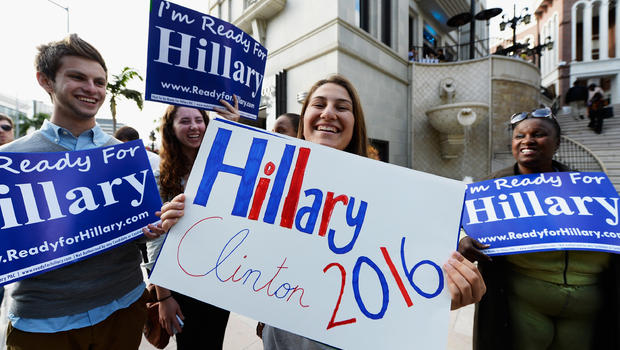 Every week on Monday morning, the Council and our invited guests weigh in at the Watcher’s Forum with short takes on a major issue of the day, the culture or daily living. This week’s question: What Direction Do You See The Democrats Going In 2016?

The Independent Sentinel: The entire party has been brought to the far-left. There are only far-left and those who obey the far-left.

If it has anything to do with deceit, non-transparency, divisiveness, promoting legislation that weakens our economy and diminishes our stature in the world, that’s where it will go.

Laura Rambeau Lee, Right Reason::The Democrats are going to push the first woman president in 2016. Our choices will be new doting, giddy grandmother Hillary Rodham Clinton or Native American woman Elizabeth (Liawatha) Warren. Hillary Clinton will campaign as a woman familiar and sympathetic with the plight of the common people and all about family values. She and Bill were so broke after they left the White House they could barely afford to pay the mortgages on their two homes, if we remember.

Warren will campaign against the corporatists – the 1% (knowing firsthand their evil capitalist ways having lived among them for much of her adult life) and bring voice to the 99% remnants of the #Occupy movement.

These two will be positioned to address the response of the voters after the 2014 mid-term elections. If President Obama is perceived to be taking us too far left over the next two years, Hillary will be the “moderate” nominee. If the country is docilely swept along with the hard left then Elizabeth Warren will be the nominee.

The Republicans face the challenge of nominating a candidate who can clearly state the need for a restoration to the founding principles of the Constitution and the rule of law and who will appeal to a majority of Americans in order to defeat the Democrats. There must be a clear distinction between the two parties. I’m going out on a limb here and saying the choice between a moderate Hillary Clinton and a moderate Republican will result in a Clinton win.

GrEaT sAtAn”S gIrLfRiEnD: If Hillary does not run, Cuomo seems to be in a better position. Serving in a state that is much larger than Maryland, Cuomo has enjoyed a higher national profile and his fight for same-sex marriage received greater media attention. The firm, PPP, released a poll this week showing Hillary at 64% and Andrew Cuomo at 3% (fourth after Hillary, Vice President Biden, and recently elected and liberal hero U.S. Senator Elizabeth Warren).

JoshuaPundit: A lot of ifs here. There are various points to consider in what amounts to a civil war.

While it’s almost a certainty that Barack Obama’s popularity will continue to decrease even if he isn’t impeached or forced to resign ala’ Nixon,  he is still going to remain a very powerful figure behind the scenes. He controls the Democrat database that’s invaluable in turnout and fundraising and  has already told the DNC in response to their request that he’s keeping it after he leaves office, but that parts of it are available for lease for the right price.Also, no matter whether he finishes his term or not, he is still going to be a key endorsement needed for black support.While his animosity towards the Clintons is well known, if  Hillary runs for president, his support will be vital to her  – or any other Democrat- winning in 2016. There’s absolutely no way of telling which way he’ll go.

And the racial complement is huge. While articles on how Republicans have lost the black and Latino vote (demonstrably untrue about Latinos, but I digress) are a dime a dozen, there are very few articles about how the Democrats have largely lost the white vote. So a massive black turnout in Democrat urban enclaves is a key component.

Another factor is a fairly thin Democrat bench. Two bad midterms in a row have wiped out a whole generation of younger Democrats capable of running and having a shot at winning a national election as well as competing in future state elections. Some of the few more moderate Democrats (relatively speaking) still left like Heidi Heitkamp of North Dakota, Joe Manchin of West Virginia, Tim Kaine of Virginia and Mark Warner of Virginia are too conservative for the Democrat’s leftist base, or lack sufficient name recognition.

So aside from Hillary, there’s not much left besides Elizabeth Warren, Andrew Cuomo or Joe Biden, whom I don’t see as a serious candidate.

I doubt Senator Elizabeth Warren or Andrew Cuomo, the current governor of NY has the fundraising clout to compete with the Clinton machine… if Hillary runs. I think that’s still an open question. But if she does, she will run on three themes – being the first woman president, income inequality, and a revisionist portrait of ‘the good old days’ of the Clinton years. Her problem is that she will have to run to the Left in order to woo the party’s base, which is not fond of her. So she would have to find someone like Elizabeth Warren, Wisconsin’s Tammy Baldwin, Deval Patrick, NY mayor Ric DeBlasio, Martin O’Malley or maybe Al Franken as a running mate. A lot of the others are simply too old… Elizabeth Warren herself is 65 and Al Franken is 63.

If Hillary doesn’t run, it will be a sheer nutroots campaign, with Cuomo and Warren as the two main competitors.

Harry Reid is already showing that he recognizes this by creating a Dem leadership position as yet unnamed for Elizabeth Warren, as a bridge to the progressive fascist wing of the party.

The Republicans are going to have to field someone who can articulately voice conservative principles, point to the misery of the Obama years and make a credible case for real change. Another ‘moderate’ like Chris Christie, Mitt Romney redux or Jeb Bush would not be good choices at all.