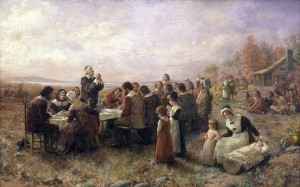 Folks calling Thanksgiving Day, ‘Turkey Day’ grinds on me.  I know they don’t mean any harm by it, toasting their glasses while enjoying a fine meal prepared with all the trimmings prior to watching football on the HD television screen that covers an entire wall in the den.

In spite of colorful band uniforms, clowns, entertainers and all that is involved with a parade marching down Main Street, we aren’t paying homage to a major department store chain for having great products to purchase as we enter the “holiday season”.   Some of you are looking at the clock anticipating your favorite department store that has promised it will open at 6pm on Thanksgiving Day so shoppers will have a jump start on Black Friday sales items.

Is it just me or isn’t that about the same as leaving church before the closing prayer so as to be home in time to watch the opening kick off?

Thanksgiving Day is much more than a feast, more than getting together with family and friends.  Thanksgiving is supposed to be a day we acknowledge all the tender mercies and blessing which our Creator has provided.  Think of Thanksgiving Day as the 53rd Sunday of the year, a bonus day to thank the Lord for any and all blessings.

America was founded by deeply spiritual individuals who based everything, including the formation of government on the Bible.  Everything we have is a direct result of Providence, the Hand of the Lord assisting the Pilgrims, early colonists and those who stood up to the King and declared our independence.   A careful study of America’s Revolutionary War victories point to many instances of divine intervention, nothing short of miracles as a rag-tag army, much of which was composed of farmers and shop keepers, defeated the most powerful military force in the world.

America was founded on Christian principles and divine intervention played a major role in our separation from Great Britain and the King; but this is no longer taught in our public schools, Atheists and communist sympathizers find these historical facts annoying.

Our children and grandchildren now are taught that George Washington was a terrible military leader who was just very lucky; nothing about his being protected by the Lord so that he might lead a fledgling nation.  Teachers can’t mention anything about God being at the foundations of our great country because of the Supreme Court’s ruling on separation of church and state.  Never mind that no such clause is found in our constitution; the Supreme Court said it’s hidden in an umbrella somewhere, so it must be.

Some of us were taught that the first Thanksgiving was started by Pilgrims to thank native Indians for showing them how to plant corn, how to fish and to survive the rugged environment.   Sounds nice, even logical; but it would be wrong.  The Pilgrims understood that their lives were in the hands of the Lord and that each day was a gift regardless of the challenges placed before them.

I recently read where second grade children at a school in Fairfield, Connecticut are taught that individual rights come from government.  That’s news to me; all this time I was under the impression that inalienable rights are a gift from God, the Eternal Father, our Creator and Lord.

Public schools are indoctrinating our children in this matter; and, with little help from parents to correct these fallacies, it’s only a matter of time, perhaps only one generation before the lies become accepted.  Once these lies have been advanced and accepted, individual God given rights will become only a memory, a vague memory.   Government entitlements, permissions, permits and preferences are a poor substitute; but the rest of the world seems to think they’re okay so what’s the big deal…

If the State succeeds in their goal of replacing God, declaring the State as a suitable replacement, America becomes a mere footnote in future history books, a failed Great Experiment in self governance.  Obama’s posturing and apologies to the world will come home to roost; isn’t that what he wants?  After all, America really wasn’t exceptional, no better than any other nation, we were just lucky and our luck ran out.

As you sit down with family and friends to celebrate on this Day of Thanksgiving, take a few minutes to count your blessings, blessings the Lord has provided.  Enjoy your turkey dinner; but praise God and thank Him for the roof over your head, for family and friends in this nation that was designed and prospered by heaven above; and give thanks and credit where credit is due.