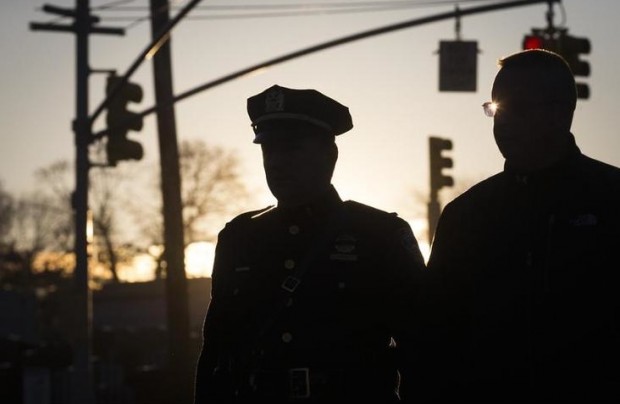 Police officers arrive at the funeral of New York City police officer Rafael Ramos in the Glendale section of Queens, Saturday, Dec. 27, 2014, in New York. Ramos and his partner, officer Wenjian Liu, were killed Dec. 20 as they sat in their patrol car on a Brooklyn street. The shooter, Ismaaiyl Brinsley, later killed himself. (AP Photo/John Minchillo)

Good for them… Red Bill de Blasio deserves nothing less.

Mayor de Blasio Gets Up to Speak. Watch How the NYPD Responds.

As he arrived, cops again turned their backs on de Blasio.

Two cops are dead and New York City’s mayor sides with the criminals who want to kill more cops, riot and destroy the city.

This is what happens when you elect communists.

This is a war against the police

One thought on “Cops turn backs on de Blasio at funeral”