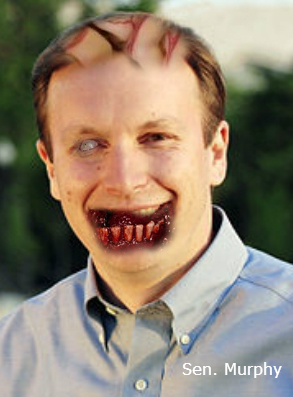 Murphy stressed that he has not met ‘a single hunter or a single person who hunts for sport’ who needs more than 10 rounds. And being the Progressive whacko he is, Murphy is promoting an agenda to disarm the American people and he needs to obscure the facts. As such, he went to the old standard of demonizing lawful gun owners.

He said those who wanted high-capacity magazines were more interested in ‘arming against the government.’

So, Murphy is equating people who choose to exercise their Constitutional rights with militants who desire an armed insurgency. He’s saying that having a 30-round mag is the same thing as joining ISIS. The truth is nearly every gun owner in America is a responsible citizen, including the millions who own modern sporting rifles and 30-round magazines. It’s a pity for weasely Murphy that the darned Constitution keeps getting in his way.

The Right Planet: Brian Williams claimed the helicopter he was aboard was forced down after being hit by an RPG (rocket-propelled grenade) during the Iraq invasion in 2003. But military personnel who were there at the time claim Williams was not in the Chinook helicopter that received shrapnel damage from the RPG. Brian Williams then admitted his “mistake” in a lengthy Facebook post, blaming the ‘fog of memory over 12 years.’ Now, there are a number of allegations going around claiming Williams has a history of embellishing his experiences, including saving puppies from a fire, seeing dead bodies float down a river during Hurricane Katrina, and Katyusha rockets whistling past his helicopter while he reported from Israel in 2006. Maureen Dowd recently wrote NBC execs were warned a year ago Brian Williams was “constantly inflating his biography.” Interestingly, some so-called “insiders” allege Williams has been lying for years, and NBC knew all about it. If true, why did NBC choose to do nothing about it?

Virginia Right!: My nomination this week is Lyin’ Brian Williams the NBC News Anchor who prefers to embellish the news and be the news rather than just read it.

I’m not sure what it is about the Middle East. All the Liberals seem to have delusions of grandeur and feel the need to put themselves in harm’s way, but only in their minds.

NBC already had credibility problems and replacing Williams will not be easy. There is no such thing as an honest left wing journalist. There are only those that have been caught lying and those who have yet to be caught lying. Bookworm Room: Yes, yes, I know he’s been nominated a dozen times before, but President Barack Hussein Obama is the weasel-gift that just keeps giving. I mean, honestly, can you imagine any president before Obama going before the National Prayer Breakfast, a primarily Christian function, and castigating its members for being associated in some way with Crusades that took place a thousand years before? Because he’s not a member of the clergy, it was amazingly arrogant and disrespectful. Because he’s an ignoramus, it was amazingly factually wrong. And because he’s a Leftist, it attempted to deflect attention from present-day depredations by practitioners of the religion that shall not be named, by strongly implying that the religion that shall not be named is simply acting out a reasonable response to Christian provocation (a thousand years ago).

Frankly, for this one, Obama should get a special “Weasel into Eternity” award.

JoshuaPundit: G.K. Butterfield is the head of the Black Congressional Caucus. Now,  he could be nominated for his campaign to have all shootings where a black person is killed in an altercation with police judged not by local prosecutors but by a ‘special prosecutor’ appointed by the Obama Justice Department (because of course, the entire justice system is racist).

But this week, the weasel merits my attention for another reason. He’s a willing tool to bash Israel and support an anti-Israel president.

President Obama, in his continuing efforts to make Israel a partisan issue has been urging Democrats to boycott Israeli PM Benyamin Netanyahu’s upcoming speech on Iran’s nuclear weapons program…and one of the first calls went out to Butterfield, the head of the CBC, whom eagerly complied. So far, there are 11 other members who are boycotting the speech, including Maxine Waters, John Lewis, Muslim members Keith Ellison and Andre Carson, ex-Black Panther Bobby Rush, James Clyburn, Eddie Bernice Johnson, Barbara Lee, Charlie Rangel, Gregory Meeks, and there are at least 12-14 others I could name whom will probably follow along like John Conyers and Sheila Jackson Lee based on what they share with the ones who have already agreed to boycott, including Butterfield… their stridently  anti-Israel voting records.

In the grand scheme of things, it makes little difference. It’s not like Israel is losing any friends here, if you get my meaning. But some of these people ought to be ashamed of themselves, especially the older ones like John Lewis and Charlie Rangel. They’ve conveniently chosen to forget and ignore  that without Jewish funding, advocacy and help in organizing the civil rights movement, it might very well have taken many years more for the Civil Rights movement’s successes, if they happened at all. It remains a long overdue debt.

Perhaps it’s too much to expect even a  bit of gratitude, especially since there are several anti-Israel Leftist  Jews also boycotting the speech to give these members of the CBC cover. But I’d expect at least a little shame deep inside, for what little that’s a worth. Of course even  that won’t exist, since most of  the CBC will gladly follow Butterfield’s urging, and become willing soldiers in Obama’s anti-Israel campaign.

This  is truly despicably weasel behavior. And I hope in the end the inevitable payback hits them all hard and unmercifully.