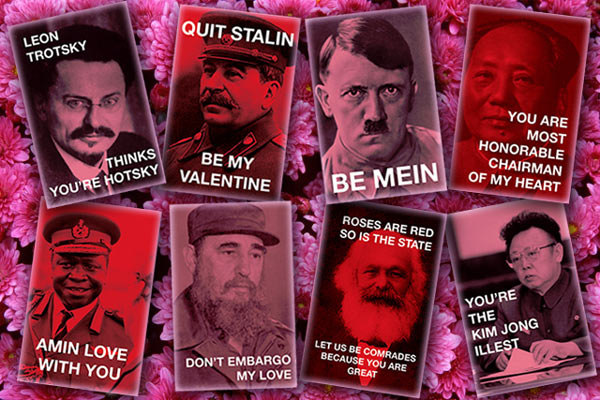 The People’s Cube is committed to safe dictator-dating and actively promotes it by being a go-to guide for all those in the totalitarian dating community. 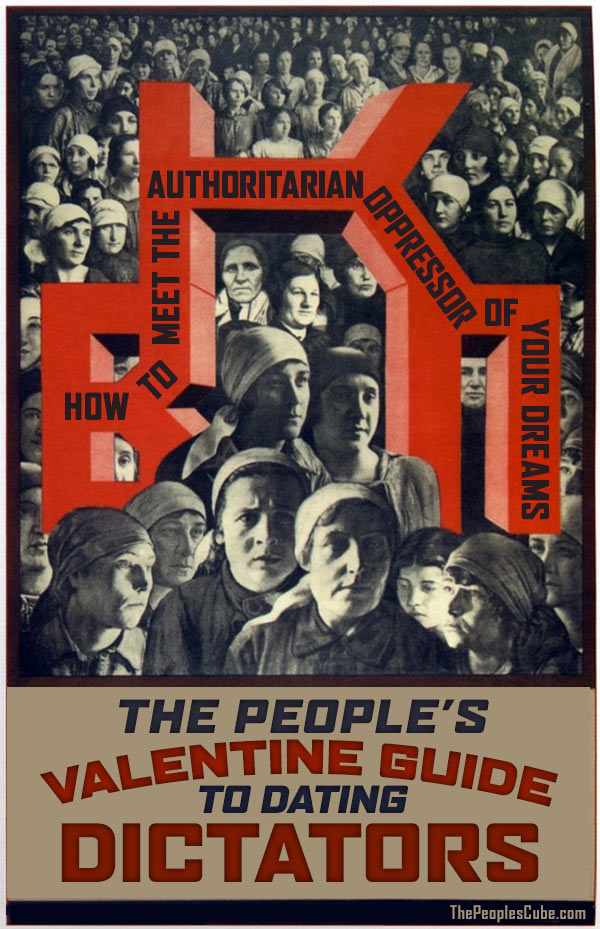 This week’s winning essay, Joshuapundit’s – The Burning Man And The Walking Dead is my look at the Islamic State, the recent immolation of a Jordanian Pilot, the reaction of certain western leaders and the uncomfortable truths of what they all signify.

His captors imprisoned him in a cage, doused it with gasoline, and made a trail of gas leading to it, so that he could see the flames approaching. They then lit it on fire, filmed his agony as it spread to the cage and engulfed it and then put out a slick,professionally produced video of the whole thing, released by Islamic State’s Al-Furqan media center. The video was titled ‘Healing the Believers’ Chests,’ which has a meaning worth exploring it detail.

The video itself started with footage of Jordan’s King Abdullah essentially declaring war on Islamic State and announcing his support for the anti-IS coalition. It then interspersed shots of al-Kasasbeh sitting in a darkened room and giving details on the air strikes he participated in against Islamic state with TV-style news reports showing the results of the airstrikes. And of course, an emphasis on scenes dead and dying child victims. It then cuts to the immolation of al-Kasasbeh.

The reaction from the West was illuminating. Both UK PM David Cameron and British Foreign Secretary Philip Hammond referred to this as ‘murder’. President Barack Hussein Obama’s statement didn’t even go that far:

“You know, I just got word of the video that had been released. I don’t know the details on the confirmation. Should in fact this video be authentic, it’s just one more indication of the viciousness and barbarity of this organization. And I think we will redouble the vigilance and determination on the part of global coalition to make sure that they are degraded and ultimately defeated. It also indicates the degree to which whatever ideology they are operating off of, it’s bankrupt. We’re here to talk about how to make people healthier and make their lives better. And this organization appears only interested in death and destruction. Thank you very much, everybody.”

Both PM Cameron and President Obama’s remarks reveal a great deal about their mindset. To Cameron and Hammond, this is a ‘murder’ carried out by criminals. President Obama didn’t even go that far, just seeing IS as some malcontents who need ‘increased vigilance’ and ‘determination’ to be thwarted. That’s how they see it..not as war, or as terrorism or, mercy no, anything to do with Islam, but just a band of criminals.

Want to know how Islamic State sees it?

As a wartime execution, as tactics, as fully justified by Islam and not as murder at all. And as barbaric as they are, they have a point. Murder, after all, has a personal element, for sex, for money or to shut someone up. This wasn’t murder.

Perhaps it’s worth remembering that Islamic State was originally armed and trained by the Obama Administration,  and that their enemies were Hezbollah, the Syrian forces of Basher Assad and the corrupt Shi’ite Iraqi government and its troops. They did not attack U.S. forces or those of any European country. The way they see it, we declared war on them, and without formally announcing it as the Qu’ran mandates. And it was the U.S. that intervened with air strikes, that has put together a loose coalition of Sunni autocrats to attack them and has been allowing Shi’ite Iran to intervene directly and wage war on them.

Of course, after the brutality Islamic State has made its trademark, especially  on any non-Muslims like Christians and Yazidis, a case could be made for going to war against them. But it wasn’t and we haven’t. All we’ve done is supply some arms and advisers to the Kurds and the Iraqi Shi’ite army and perform some air strikes and drone attacks.

Because to actually go to war against Islamic State might also involve certain problems, since literally everything Islamic State is doing is fully justified by the Qu’ran. That’s why the Obama Administration and UK PM David Cameron are ever so careful not even to whisper the word ‘Islam’ where IS is concerned.

Now, Jordan, being an Arab Muslim State did declare war on IS, and publicly. That’s exactly why Islamic State showed that footage of the King doing so in their video, why they were careful to include the Jordanian pilot’s confession of participating in the bombing attacks and why they were careful to show a number of brutalized children that IS  claimed were victims of those attacks.

You see, they learned this tactic from Hamas and Hezbollah. And while they probably may have figured out by now that it only works in creating an uproar in places like Europe and in the UN if it’s Israel defending itself, it will likely have that desired effect on many Muslims.

In fact some Arab members of the coalition were already easing themselves out, although the White House is claiming that they’re all still committed to defeating Islamic State and were just taking a breather.We’ll see, but it’s a fact right now that only Jordan is now more committed than it was after Moaz al-Kasasbeh’s death. That’s why the United Arab Emirates (UAE), a big part of the coalition,  just sent a squadron of F-16s to Jordan that the  Obama Administration just gifted the UAE as a ‘reward’ for joining up .

King Hussein’s renewed commitment can be understood because Jordan is a U.S. client state heavily dependent on foreign aid, and because al-Kasasbe’s death has been a unifying issue in an increasingly disunified kingdom. How long that lasts is anyone’s guess.

The Sunni autocrats are wary for a couple of reasons. First, as they see the Obama Administration becoming increasingly closer to Iran, they also understand now that the Sunni forces of Islamic State represent one of the few checks to Iran in the region.

Obama allowing Iranian backed Shi’te rebels to overthrow a Sunni ally of America in Yemen and essentially okaying an Iranian colony and a brand new strategic threat to the Saudis and the UAE to emerge was a major wake up call. The Saudis are now bracketed by Iranian client states from the north in Iraq and from the south by Yemen, and they fear being surrounded and overwhelmed.

The second reason is that the Saudis and the other Sunni autocracies are gradually becoming leery of fighting Islamic state has to do with their need to placate conservative religious constituencies in their own kingdoms. However barbaric Islamic State seems to us, their ideology isn’t ‘whatever it is’  to quote President Obama but a mainstream fundamental reading of the Qu’ran and Sharia.

Which of course, is the core of the matter.

What he’s done here is a must read. His premise – and I largely agree with him – is that President Obama’s appeasement of Iran isn’t merely inexperience. It’s not so much that there is no strategy in place, but that there has indeed been a consistent strategy, one based on this president’s malignant ideology that has been his goal since day one. And thus far more dangerous.

Here are this week’s full results. Only Ask Marion was unable to vote this week, but was not subject to the normal 2/3 vote penalty for not voting:

It’s a weekly magazine of some of the best stuff written in the blogosphere and you won’t want to miss it or any of the other fantabulous Watcher’s Council content.