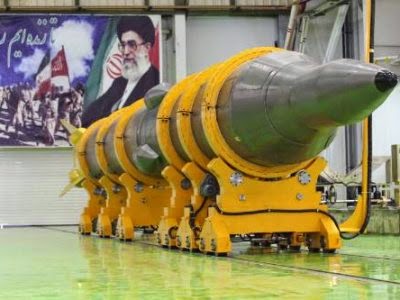 The strangest thing about Obama’s efforts to achieve friendly relations with Iran, something he has tried to do since he first took office in 2009, is that Iran has made it abundantly clear since its Islamic revolution in 1979 that it hates America and, in tandem, Israel as well. 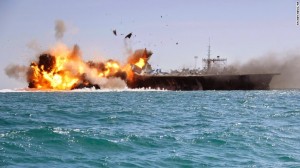 In an Iranian naval drill on February 25, Iran blew up a mock U.S. aircraft carrier near the entrance of the Persian Gulf. It was a full-size replica of the USS Nimitz. This is the antithesis of friendship, but just to make their position clear, Iranian Rear Adm. Ali Fadavi, commander of its naval forces, let it be known that “We have the most advanced sea mines which cannot be imagined by the Americans.”

But the Americans—in this case the President of the United States and his negotiators—have been making every concession they can to get an agreement that would limit Iran’s ability to produce its own nuclear weapons. Dr. Norman Bailey, an adjunct professor of economic statecraft at the Institute of World Politics, Washington, D.C., recently wrote that “The U.S. looks set to present its allies with a dangerous fait accompli on Iran’s nuclear program.”

“The most recent deadline of March 24th means only one thing,” Dr. Bailey wrote in a World Tribune commentary. “A deal has been reached between the U.S. and Iran, which will be announced to the other five participants when the Obama administration decides it is convenient to do so.” The other five obviously have nothing to say regarding the negotiations. At one point, the French foreign minister stormed out of the initial meeting proclaiming “This is a fool’s deal.”

It’s worse than a fool’s deal. It is a deal that is predicated on the nuclear destruction of Israel and, after that, the U.S. is next. One might think that Obama knows this and one might be right. People like Mayor Rudy Giuliani have long noticed that Obama doesn’t seem to like America very much.

A commentary by Lawrence Sellin, PhD, a retired colonel with 29 years of service in the U.S. Army Reserve, and tours of service in Afghanistan and Iraq, and Major General Paul E. Vallely, U.S. Army, retired, noted that the nuclear agreement did not include measures that would prevent any cooperation between Iran and North Korea or other rogue states. This has not gone unnoticed by the Israelis. Intelligence Minister, Yuval Steinitz, has noted that “We all know that Iran, Syria and North Korea are very close to each other.”

North Korea has its own nuclear weapons program and, as Dr. Sellin and Maj. Gen. Vallely, warned, “Unless specifically prohibited and enforced within the terms and conditions” of the deal, “Tehran may attempt to sidestep the protocols by ‘outsourcing’ parts of the bomb production process to North Korea, Iran’s long-term partner on everything from launch missiles to guidance systems to nuclear war head technology and other required components.”

Anyone recall George W. Bush’s “Axis of Evil”? It was Iran, North Korea, and Iraq.

In case you are less than confident of Iran’s intentions, in 2013 before the previous nuclear negotiations were concluded, according to the Fars News Agency, the regimes’ outlet run by the Iranian Revolutionary Guards, Gen. Massoud Jazayeri, the deputy chief of staff of Iran’s armed forces, said “America’s interests and all of Israel are within the range of the Islamic Republic and there is not the slightest doubt among Iran’s armed forces to confront the American government and the Zionists (Israel).” 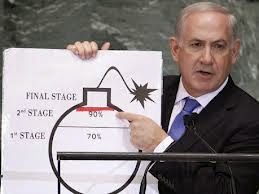 The Prime Minister of Israel, Benjamin Netanyahu will address a joint session of Congress on Tuesday. On September 29, 2014, he addressed the United Nations. The message will be the same. Any deal with Iran will be a bad deal for Israel which has been in the crosshairs of the Iranians since they came to power in 1979. This isn’t an “existential” threat. It is a threat that can and will destroy Israel if permitted to occur. Obama’s negotiations will leave Israel no other option than to attack Iran’s nuclear facilities.

If the U.S. Congress has the means to deter and render Obama’s negotiations null and void, they had better do so. On September 26, 2007, the U.S. Senate passed legislation by a vote of 76-22 designating the Iranian Revolutionary Guards as a terrorist organization. The long record of Iran and its state-sponsored terrorism can be found by visiting Wikipedia.

What we are witnessing is a level of insane appeasement comparable to that of the 1930s when European nations refused to acknowledge Nazi Germany’s clear intention to conquer them.

Iran’s intentions are known to Obama and no doubt to our Congress. They are surely known to Israel and the Gulf nations. If history is any guide, these negotiations will put the world on the path to a cataclysm that defies the imagination.