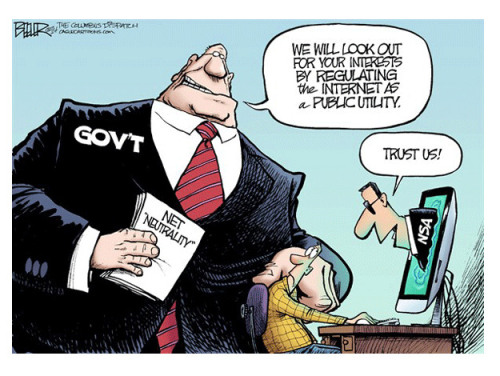 The Noisy Room: We’re in the hands of fools and corrupt bureaucrats. Last Thursday, the Federal Communications Commission held a faux meeting on open Internet rules and access to broadband Internet. Commissioner Ajit Pai made a statement before the FCC vote to take unprecedented control over the internet with a secret plan. Yes, secret. Secret as in no exposure to the public or Congress prior to its enactment. What follows is the transcript of his comments – in echoes of Obamacare, this had to pass before we could know what was in it. Except, they are still keeping it under wraps. It must be very, very bad indeed.

“The Wall Street Journal reports that it was developed through ‘an unusual secretive effort inside the White House.’ Indeed, White House officials, according to the Journal, functioned as a parallel version of the FCC. Their work led to the president’s announcement in November of his plan for internet regulation, a plan which the report says blindsided the FCC and swept aside months of work by Chairman Wheeler toward a compromise. Now, of course, a few insiders were clued in about what was transpiring. Here’s what a leader for the government-funded group Fight for the Future had to say, ‘We’ve been hearing for weeks from our allies in D.C that the only thing that could stop FCC chairman Tom Wheeler from moving ahead with his sham proposal to gut net neutrality was if we could get the president to step in. So we did everything in our power to make that happen. We took the gloves off and played hard, and now we get to celebrate a sweet victory. Congratulations. what the press has called the parallel FCC at the White House opened its door to a plethora of special interest activists. Daily Kos, Demand Progress, Fight for the Future, Free Press, and Public Knowledge, just to name a few. Indeed, even before activists were blocking the chairman’s driveway late last year, some of them had met with executive branch officials.

“But what about the rest of the American people? They certainly couldn’t get White House meetings. They were shut out of the process altogether. They were being played for fools. And the situation didn’t improve once the White House announced President Obama’s plan, and ‘asked’ the FCC to implement it. The document in front of us today differs dramatically from the proposal that the FCC put out for comment last May, and it differs so dramatically that even zealous net neutrality advocates frantically rushed in, in recent days, to make last-minute filings, registering their concerns that the FCC might be going too far. Yet, the American people, to this day, have not been allowed to see President Obama’s plan. It has remained hidden.

“Especially given the unique importance of the internet, Commissioner O’Rielly and I ask for the plan to be released to the public. Senate Commerce Committee Chairman John Thune and House of Representatives Chairman did the same. According to a survey last week by a respected democratic polling firm, 79% of the American people favored making the document public. Still, the FCC has insisted on keeping it behind closed doors. We have to pass President Obama’s 317-page plan so the American people can find out what’s in it. This isn’t how the FCC should operate. We should be an independent agency making decisions in a transparent manner based on the law and the facts in the record.

“We shouldn’t be a rubber stamp for political decisions made by the White House. And we should have released this plan to the public, solicited their feedback, incorporated that input into the plan, and then proceeded to a vote. There was no need for us to resolve this matter today. There is no immediate crisis in the internet marketplace that demands immediate action. now. The backers of the president’s plan know this. But they also know that the details of this plan cannot stand up to the light of day. They know that the more the American people learn about it, the less they will like it. That is why this plan was developed behind closed doors at the White House. And that is why the plan has remained hidden from public view.

“These aren’t my only concerns. Even a cursory look at the plan reveals glaring legal plans that are sure to mire the agency in the muck of litigation for a long, long time. but rather than address them today, I will reserve them for my written statement. At the beginning of this proceeding, I quoted Google’s former CEO, who once said, the internet is the first thing that humanity has built, that humanity doesn’t understand. This proceeding makes it abundantly clear that the FCC still doesn’t get it. but the American people clearly do. The proposed government regulation of the internet has awakened a sleeping giant. I’m optimistic we’ll look back on today’s vote as a temporary deviation from the bipartisan consensus that’s served us so well. I don’t know whether this plan will be vacated by a court, reversed by Congress, or overturned by a future commission, But I do believe its days are numbered. For all of those reasons, I dissent.” 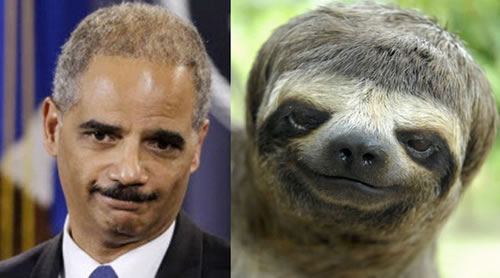 The Independent Sentinel: Eric Holder wants to make it easier to get the white guys in civil rights cases. He is very concerned that he couldn’t get a case together against Officer Wilson and George Zimmerman and has called for Congress to lower the standard of proof.

That’s pretty alarming. The government is going to go after people whether they are guilty or not?

“There is a better way in which we could have federal involvement in these kinds of matters to allow the federal government to be a better backstop in examining these cases [civil rights cases],” Holder said in an NBC News interview Thursday.

“We do need to change the law. I do think the standard is too high,” Holder said in the interview. “There needs to be a change with regard to the standard of proof.”

The Right Planet: Despite the fact multiple investigations and a grand jury have failed to produce any evidence “racism” played any part in the shooting of Michael Brown by the Ferguson Police Department, AG Eric Holder and his race-obsessed DOJ are hellbent in turning the whole incident into a race crime, i.e. “hate crime” (yeah, huh, imagine that). Now Holder’s DOJ is planning to release a report condemning the Ferguson Police of funding their department with “racist traffic stops.” 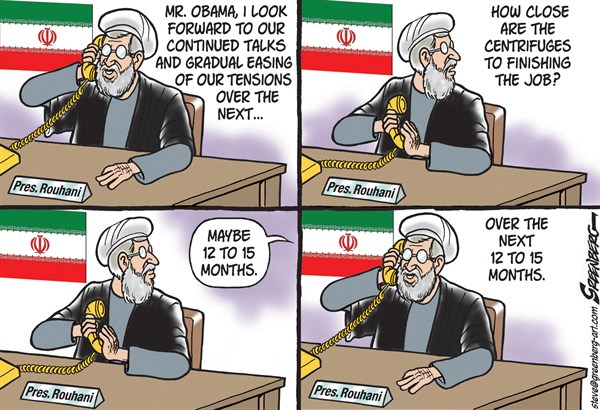 Virginia Right!: I nominate the Democrats who plan to boycott tomorrow’s speech by Israeli Prime Minister Benjamin Netanyahu to the US House.

These Democrats, who take every possible opportunity to shun Bibi, are acting like 2 year old children throwing a temper tantrum. And they are, of course, taking their orders from Obama who knows his pro-Iran “behind the curtains” activities will be the topic ot the day.

America has, for the most part, stood with Israel. But this president has, in my opinion, been downright hostile towards Israel.

There is no valid reason to not listen to the man. So the Boycottin’ Democrats win my nomination this week.

Ask Marion: My nominee for Weasel of the Week is Jewish Tennessee Congressman Steve Cohen, part of a 50 Democrat coalition that is boycotting Israel Prime Minister Benjamin (Bibi) Netanyahu’s speech to a joint session of Congress on Tuesday 3.3.15. Netanyahu’s speech is a crucial message to both the American and the Israeli people; a message one would think all American Jews would be interested in hearing.

The Democrat Congressman appeared on the Kelly File to promote the White House’s position that Netanyahu’s visit is a ‘politically tool wielded against our president’.  Amazing how the Democrats and their progressive media shills constantly talk about working together but whenever the opportunity arises they whine or refuse to participate.

Just because Republican Speaker of the House John Boehner invited the Prime Minister to speak to Congress without asking the President’s permission, Obama not only refuses to attend, but is sending no representatives from the White House. Netanyahu is a man of courage and strength who understands the issues and exudes leadership, an ally that America has left behind.  And his speeches are always worth listening to.  Prime Minister Netanyahu gave a speech at AIPAC that was a precursor to his speech to the U.S. Congress.

One must wonder how an American politician, an American Jew, would not only choose to miss this man’s speech but actually help organize a walkout or boycott in support of our President’s childish hurt feelings; a President that is supporting a misguided negotiation with a goose stepping country that hates both America and Israel and is about to go nuclear with America’s help.

Congressman Cohen appeared on Fox with Megan Kelly to defend his boycott and participating in the politicizing of Tuesday’s event, the night before Netanyahu’s speech, but didn’t do a very good sales job of his position.  The Jewish Democrat Congressman Steve Cohen said “I love Israel. I’m for Israel. I think Israel is going to be hurt by this speech,” he told Megyn Kelly.

Mike Huckabee told Megyn Kelly that Israeli Prime Minister Benjamin Netanyahu isn’t giving his speech to Congress to win the election in Israel, and that it may in fact be “very destructive” to his political career. “He’s risking his political life because he values not just the future of Israel, but really, the future of civilization.”