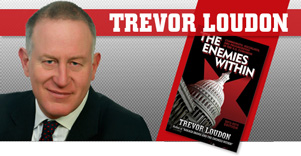 Loudon, a New Zealand researcher and investigative journalist, has been touring America as a modern-day Paul Revere to warn America that “The Enemies Within: Communists, Socialists and Progressives in the U.S. Congress” are here and that they are endangering America and all she stands for. The book is published by Pacific Freedom Foundation.

“The Enemies Within” profiles fourteen Senators and more than fifty Representatives and their ties to Communist Party USA, Democratic Socialists of America, the Workers World Party and the Institute for Policy Studies, Council for a Livable World and other radical anti-American organizations.

Says Loudon, “I tried to keep the second book to 700 pages, but the communists just kept coming and coming.”

Trevor’s work has been featured in numerous books and articles, thousands of blog posts and many interviews. Trevor was responsible for exposing Barack Obama‘s childhood mentor, the Communist Party member Frank Marshall Davis and for exposing Van Jones, Obama’s communist “Green Jobs Czar,” who was then forced to leave the White House.

Don’t miss Loudon and Beck, back together again, Monday, March 9th. Trevor will be covering issues such as Russia, Communism, War, the Muslim Brotherhood (The Betrayal Papers) and Progressive/Marxists in Congress.

About Trevor Loudon: Trevor is an activist and political researcher from Christchurch, New Zealand. He believes in freedom with responsibility, not freedom from responsibility. Trevor is also the founder and editor of KeyWiki.org, a rapidly growing website with the goal of exposing the covert side of U.S. and Global politics. Trevor’s books are available at Amazon.com, Bn.com and PacificFreedomFoundation.org.