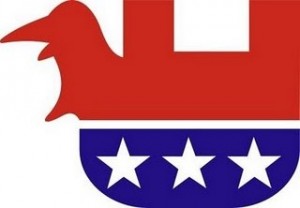 Every week on Monday morning, the Council and our invited guests weigh in at the Watcher’s Forum with short takes on a major issue of the day, the culture or daily living. This week’s question: Is the Republican Party Dead? Can It Be Saved?

GrEaT sAtAn”S gIrLfRiEnD: Au Contraire! As best understood, GOP is like going ganksta – scoring majorities every where in state and local chiz. And if GOP Governors really wanted to do some monkey wrenching they could regress back to the old school days when state governors and their legislative posse determined who the senators were.

Lee Outlaw disagrees and gives up 3 reasons why cause the GOP is kaput:

The focus on RINO’s.
Destruction of true conservatives.
Rise of Libertarians

Laura Rambeau Lee, Right Reason: The Republican Party is not dead but it has become corrupted with political and social progressives. To have any chance to get a true conservative to win the primary election it is going to take hard work at the local level. By now, Americans who have been paying attention know that our country is headed in the wrong direction under the Obama presidency. According to the latest Rasmussen poll, sixty-two percent of Americans believe we are headed in the wrong direction. This includes eighty-two percent of Republican voters and sixty-six percent not affiliated with either the Democrat or Republican Party.

Grass roots Get Out The Vote volunteers have to convince those registered as Independent to change party affiliation to Republican so they can vote in the primary and help select the Republican candidate. This is the only way we have a chance of getting a conservative in the White House. In addition, our contributions should go directly to the candidates. We need to find our candidate early and throw all of our efforts behind him or her and make sure they garner the nomination.

We have the numbers. We need to get the momentum early and keep it going throughout the primary process and into the general election.

JoshuaPundit: If not dead, certainly at least on life support, although an infrastructure this large and well rooted may take some time before the coroner of history notifies us. Put simply, a political party’s raison d’etre is its support of certain principles. In the case of the Republicans, for instance, it was originally the abolition of slavery. Actually, a lot of the original Republican Party came from the Whigs after that party split over that issue.

A party simply cannot go on disrespecting its declared principles and lying to its base supporters time after time and expect them to turn out and vote. That’s what eventually happened to the Whigs and that’s why over 3 million self-identified Republicans sat on their hands and stayed home in 2012.

I’m normally an optimist, as you know, but here’s how I see it. The GOP, no thanks to the RNC, won an historic majority in the House in 2010 with the promise they were going to defund ObamaCare. They didn’t and caved, with the excuse they didn’t run the Senate. And in 2012, they ran the one candidate unable to attack ObamaCare. In 2014, the GOP campaigned on taking over the senate and thy were elected to stop Obama’s agenda, especially his unconstitutional amnesty for illegal aliens by executive order. You’d think anyone with a modicum of political sense would understand that 15-30 million new Democrat voters might just affect their election prospects in the future, but not these guys! The donor class and the Chamber of Commerce want a continual stream of cheap labor and the Dems want the votes, so there’s a real meeting of the minds here at the country’s expense!

And it’s not just amnesty. On virtually every issue, the Republicans have sacrificed their constitutional power of the purse and have allowed this president and Harry Reid to do whatever they wanted. Even Reid’s using the nuclear option to shove through radical judges and appointees like those FCC functionaries brought no retaliation from the house… or from the Senate, now that Mitch McConnell is majority leader.

There are many admirable Republicans, but they aren’t the ones leading the party and as such, their efforts have been doomed to frustration. The Republicans right now are a house divided, and to paraphrase Lincoln, without something radical changing I don’t see them standing.

The Right Planet: We are quickly approaching the point where the GOP will be relegated to the dustbin of history, in my opinion. If Obama’s illegal executive amnesty is allowed to stand, it will bring at least eight million new voters into the Democratic Party. And that’s a conservative estimate. If the Republican leadership believes allowing executive amnesty will create new Republican voters, they are utterly delusional–not to mention the ominous precedent of allowing a sitting president to rule by decree, sans Congress.

But, according to Trevor Loudon, the Chamber of Commerce has spent $1.7 billion promoting amnesty over the past 10 years. Why? Simple answer: cheap labor. It appears that members of the Vichy wing of the GOP are only thinking of profits and their own expedient ends. California, which is the most populous state in the union with the most electoral votes, has already been lost to the Marxists and communists. If executive amnesty is not shot down, the GOP can kiss the second most populous state in the union, Texas, goodbye. And if that happens, you’ll never see another Republican president elected again in your lifetime. We’ll have a one-party state ruled by the unions and the communists. If you think the progressives are arrogant now, just wait until they have sole control without any effective opposition. You won’t have to visit Venezuela or Cuba to see what it’s like. You’ll be living in it.

The Glittering Eye: I’m not really sure how to answer the question. Let’s start with some definitions. There are several different types of political parties. The two we’re most interested in a programmatic parties and catch-all parties.

A programmatic party is a party that has a clear, stated identity and point-of-view and a program that implements that point-of-view. A catch-all party is the opposite–it’s a political party that unites people with many different, often drastically different points-of-view. A catch-all program practically by definition does not have a coherent program.

The next definition we need is one of electoral systems. Rather than going through the whole array of different alternatives I’ll just mention the system that we have. In the United States we have what is referred to as a “winner take all” system. This contrasts with, for example, a proportional representation system.

It is widely recognized that “winner take all” systems inevitably evolve into two party systems.

There is no future for a programmatic party in the United States be it a conservative party or a liberal party. The only viable parties at the national level are necessarily catch-all parties. There are other practical problems with tossing the RINOs and DINOs out of the Republican and Democratic Parties, respectively but the most immediate result of doing that will be to discredit the entire idea of political parties. That won’t mean that the two major parties will be tossed into the ashcan of history. It means they’ll become decreasingly representative of anything but a handful of party bosses and big donors.

The Independent Sentinel: Yes, it’s dead, stone cold dead. Near as I can figure, the only thing they really stand for is not increasing the minimum wage.

Actually, that’s not fair. They still care about the military though they seem a little shaky on that lately too. They did pass sequestration and our military now have to worry about job security, pay, benefits, housing allowances, and affordable medical care.

They run as Republicans and serve as Democrats.

Ask Marion: The Republican party is dead if they do not run and fight the good and successful fight in 2016 to nominate and elect a fiscal and constitutional conservative to the office of President of the United States.

The U.S. Congress has been co-opted by RINOs and progressives like House Speaker John Boehner, Senator John McCain and his buddy Senator Lindsay Graham who line up with the Democrats to demonize and stop the true Republicans like Senator Ted Cruz, Senator Rand Paul, Congresswoman Mia Love, Congressman Trey Gowdy, Senator Mike Lee, Congressman Jason Chavetz, Congressman Jeff Sessions and the like… who are desperately trying to save America and live up to their campaign promises.

Our Watcher’s Council Teammate Sara from the Independent Sentinel recently wrote: “;The Republican party is officially dead. Remember that autopsy Republicans held after Romney lost in 2012? They were serious. They had an autopsy because they’re dead.”;

And former Senator Jim DeMint wrote a great piece entitled, “If Not Now … When? Will the GOP Majority Ever Stand for Anything? ”

The Republican Party is close to going the way of the Whig party but there is much more at stake than the GOP. Because of where America stands… teetering on the very edge of existence, 2016 could be the end of both the Republican Party as well as the America we grew up in, our Founders gave us and the rest of the world used to envy.

We need to stop listening to the progressive media, educate ourselves and then educate our family, friends and neighbors. The Republican Party and America need Gov. Sarah Palin, Gov. Scott Walker, Sen. Ted Cruz, Sen. Rand Paul or the like as their candidate in 2016 and our president for the next 8-years… Or they both will be extinct!

One thought on “Forum: Is the Republican Party Dead? Can It Be Saved?”