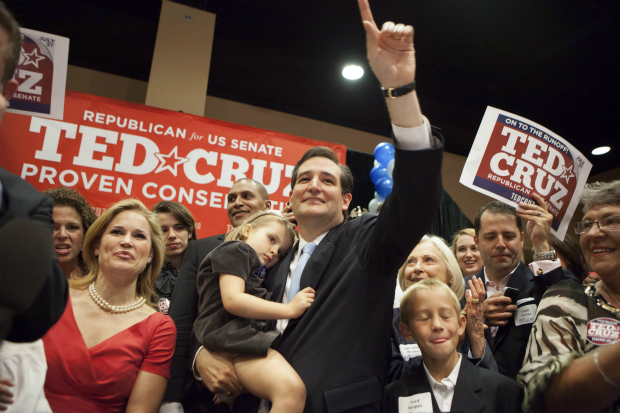 Wow! Can you believe how Ted Cruz is catching it from both sides in response to his powerful speech announcing his quest to win the White House in 2016? As expected, the Left is doing their typical thing calling Cruz extreme, stupid and crazy. Conservatives are taking shots at Cruz because he has not mastered walking on water.

Folks, this is what you get when you have the cojones to take a bold stand for liberty and conservatism. The hysteria, outrage, slings and arrows coming from both sides of the political aisle targeted at Cruz is what a true conservative must be willing to endure.

For crying out loud, Cruz simply trumpeted traditional principles and values that Americans have celebrated since the Republic’s founding; American Exceptionalism, liberty, freedom, hard work, God and country. The problem is without even realizing it, many have succumbed to the Left successfully tainting their thinking, lowering the nation’s behavioral bar and forcing political correctness down our throats. So when a Ted Cruz comes along, his message sounds edgy to those hearing it for the first time. And yet, I believe many will be instinctively drawn to it.

Why? Because conservatism connects with our higher self/spirit. It inspires people to be the best they can be. That is what attracted me to conservatism.

Jesus said, “My sheep hear my voice….and follow me.” Without a miracle, conservatism will not resonate with lazy deadbeats filled with class envy and hatred for achievers. It is a foreign language to them. All they care about is handouts and a free ride. Let the Democrats continue pandering to them; the chickens and turtles. Let’s take the higher ground, striving to attract eagles which I believe are a majority of the American people. This is why the Left is so terrified of Cruz, he knows how to spread the good news of conservatism.

Folks, we must stop Obama’s quest to diminish who we are, reducing us to a nation of part-time workers, dependent and subservient to big government. In the name of our founding fathers, we are Americans! Let’s act like it!

Both sides going nuts over Cruz’s bold, upbeat and inspiring articulation of conservatism illustrates what we are up against. Even conservatives are saying Cruz is too this or not enough that. http://bit.ly/1BpQzJz Some conservatives feel Cruz so boldly preaching conservatism on the big stage is a little embarrassing and scary, careful not to be seen standing too close to him by the MSM. When asked, “Didn’t we see you with Ted Cruz?” They reply, “H— no, I never knew him!”

It has stuck in my craw for quite a while the way the Left has gotten away with pushing us around, bullying us into silence and tolerating every abhorrent behavior and religion under the sun. Meanwhile, when Ted Cruz dares to stand up for righteousness, Christianity, God and country the Left goes shock and awe ballistic on him.

Wimp-i-fied conservatives and political know-it-alls suggest that Cruz dial it back a bit; make himself more palatable to “mainstream” voters. Others say Cruz does not have a snowball’s chance of becoming the GOP nominee let alone winning the White House. I believe they are wrong. As I stated, like the gospel, conservatism is good news. My advice to Cruz is preach it brother, preach it!

I do not know about you guys, but I am done with moderate Republican clone presidential nominees like McCain, Romney, Jeb Bush and Christie. If I go down in defeat, I want to go down inspiring my fellow Americans to come up higher; fighting my butt off for liberty and freedom behind the likes of a Ted Cruz.