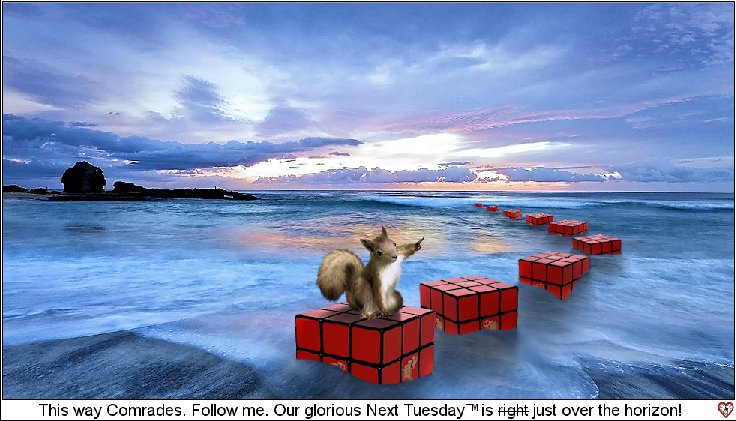 Happy 10th Birthday to our Comrades at The People’s Cube!!! 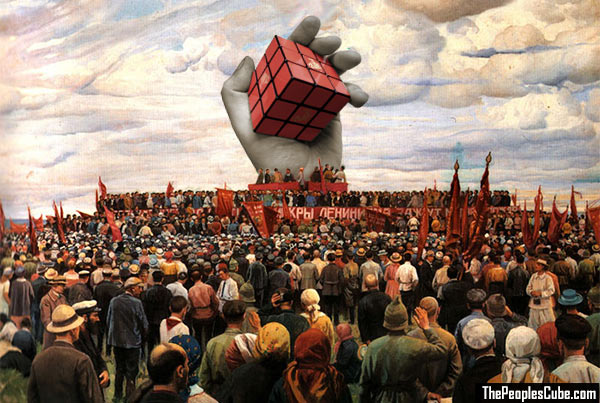 Yes, death to the Great Satan! – Ayatollah Khomeini leading crowds in anti-American chants just over a week ago.

If he being Young And Unskillful seeks to gamble for silver and gold, Take his money my son praising Allah! The fool was made to be sold! -Renowned Persian poet Hafiz, 14th century CE

I believe Herr Hitler is a man whose word can be relied on. – Neville Chamberlain, 1938

This week’s winning essay by a nose was Joshuapundit’s, Munich II, which examines President Obama’s so-called ‘framework’ of his nuclear agreement with Iran. As we now know, our president was not exactly being honest with the American people in that speech in the Rose Garden! So what’s the actual motivation behind his apparent desperation to achieve some kind of deal… something the Iranians are happily taking advantage of. Here’s a slice:

President Barack Hussein Obama announced yesterday that a deal – ooops, a ‘framework for a deal’ had been achieved with Iran on its illegal nuclear program.

Here’s what the president said the components of this unwritten, unsigned framework were.

First of all, he claimed that the reactor at Iran’s heavy water facility at Arak will be dismantled so the Iranians cannot produce plutonium, a second route to nuclear weapons.He also claimed that nuclear material from Arak would be shipped out of Iran, that Iran would not build a new heavy water reactor and that Iran will not reprocess fuel from its existing reactors ever.

Second, he claimed that the Iranians agreed that its centrifuges would be reduced by two thirds, and that Iran will not enrich uranium with its advanced centrifuges for at least the next 10 years. He also said that Iran would no longer enrich uranium at its top secret military facility at Fordow. and that there would be severe limits on Iran’s stockpiling of the materials needed to build a nuclear weapon.

He said there would be limits on Iran’s nuclear program, research and development for a decade and that Iran would never be allowed to build a nuclear weapon.

He also claimed that current sanctions would be gradually phased out in accordance with Iranian compliance, that Iran would face intense inspections and scrutiny, and that if if was found cheating, the UN would slap massive sanctions back on Iran.

There’s not a single statement in the above four paragraphs that’s true, and that comes from no less than Iran’s own Foreign Minister Javad Zarif, who supposedly agreed to all this in the last minute negotiations at Lausanne:

Iranian Foreign Minister Javad Zarif accused the Obama administration of misleading the American people and Congress in a fact sheet it released following the culmination of negotiations with the Islamic Republic.

Zarif bragged in an earlier press conference with reporters that the United States had tentatively agreed to let it continue the enrichment of uranium, the key component in a nuclear bomb, as well as key nuclear research.

Zarif additionally said Iran would have all nuclear-related sanctions lifted once a final deal is signed and that the country would not be forced to shut down any of its currently operating nuclear installations. […]

“Iran/5+1 Statement: ‘US will cease the application of ALL nuclear-related secondary economic and financial sanctions.’ Is this gradual?” he wrote on Twitter.

He then suggested a correction: “Iran/P5+1 Statement: ‘The EU will TERMINATE the implementation of ALL nuclear-related economic and financial sanctions’. How about this?”

The move to allow Iran to keep centrifuges at Fordow, a controversial onetime military site, has elicited concern that Tehran could ramp up its nuclear work with ease.

The scrutiny and inspections, of course, can be relied on to tell us everything we need to know about Iran’s nuclear program, right? Because the Iranians would never try to hide that sort of thing from us, and can be relied on not to cheat

As for the president’s threat of renewed sanctions, just like his promises on ObamaCare he is knowingly lying to the American people. It took two years to put together the sanctions regimen in the UN. Now that Obama has essentially dismantled it, it isn’t going to happen again, certainly not in time to be of any use. Russia will see to that.

And here perhaps is the most chilling statement Zarif made:

Zarif also revealed that Iran will be allowed to sell “enriched uranium” in the international market place and will be “hopefully making some money” from it.

Can you imagine whom a regime that is the major supporter of Islamist terrorism like Iran is likely to sell nuclear materials and know how to? Iran itself obtained quite a bit from Pakistan’s notorious AQ Khan when he was running what amounted to a cash and carry supermarket for this sort of merchandise. What Iran is obviously planning will make what Khan did look minor.

President Obama claims that this ‘framework’ agreement is a good deal. In reality, all it does is give Iran another three which gives Iran another three months to work on its nuclear weapons technology in exchange for…absolutely nothing specific. Instead of leading to reduced nuclear proliferation, it will increase it, since countries like Egypt and Saudi Arabia are under no illusions as to what this means.

This goes beyond mere appeasement. President Obama and John Kerry are enabling a nuclear armed Iran.

All other things aside, this president and his team are allowing a murderous regime that has sworn to destroy Israel on numerous occasions the tools to attempt a second Holocaust. And there’s no question in my mind that this is deliberate.

The moron prog think tank response to this is that the Iranians are rational actors whom would never do this, because of the risk of retaliation by Israel. Let’s see what the founder of the regime, the Ayatollah Khomeini had to say about that:

The Iranians have continued to promise to destroy Israel since 1978 when Khomeini took over. That goal has never changed.

Neither has their goal of destroying America.

In our non-Council category, we had a tie between Mark Steyn with Let Them Bake Cake submitted by The Noisy Room and Matt Continetti/Free Beacon with Benghazi, Bergdahl, and the Bomb submitted by The Watcher.

I loved both, but Steyn gets the nod this week.

Here are this week’s full results. Only Ask Marion and The Independent Sentinel were unable to vote this week, but were not subject to the 2/3 vote penalty for not voting: