Given the recent debacle involving ABC News, George Stephanopoulos, and Politico — which highlights the incestuous and corrupt goverment-media axis — I thought it was worth revisiting the topic of GOP debate moderators.

Recall that Snufflapoulos moderated several GOP debates in 2012 with sickening results. In one instance, ABC’s “paid Democrat hitman” suddenly shifted the topic from job creation to “banning contraceptives”, which was the Ass Party’s bogus meme of the month. 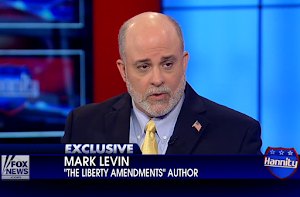 In August of 2013, after significant criticism of its choice of moderators, the Republican leadership suddenly announced a willingness to embrace the conservative wing of the party.

Sean Spicer, the Communications Director of the Republican National Committee, made a surprising statement: he said that Mark Levin should moderate the GOP debates. Levin formally accepted the offer.

I was able to interview Spicer at the time and it’s worth revisiting his remarks.

Ross: Sean, a recent statement you made really caught conservatives by surprise — and in a positive way. You said you thought Mark Levin and perhaps other conservative thought leaders should moderate GOP debates. How serious was that statement and did the reaction catch you by surprise?

Spicer: That was a very serious statement. Obviously, we’re not at a point yet of picking debate forums or moderators, but we are definitely committed to energizing the conservative base. It’s common sense: anyone’s who listening to Rush, Levin, Hannity… they are addressing the issues that the grassroots are concerned with.

What I also find absolutely unbelievable is that in 2008 Chris Matthews, of all people, moderated two GOP debates. Yet why wouldn’t we insist on the converse situation?

Now is the time to remind the RNC that we will hold them accountable for their statements.

Mark Levin and Sean Hannity should each moderate a GOP debate.