Every Tuesday, the Council nominates some of the slimiest, most despicable characters in public life for some deed of evil, cowardice or corruption they’ve performed. Then we vote to single out one particular Weasel for special mention, to whom we award the statuette of shame, our special, 100% plastic Golden Weasel. This week’s nominees were all disgusting but the Council has spoken and we have our winner. The envelope please… 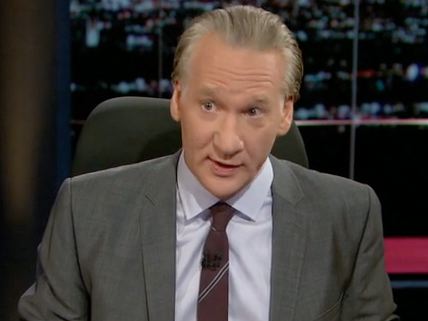 The Noisy Room: Bill Maher for smearing Rush Limbaugh and offending just about everyone this week with his skit on Caitlyn Jenner. Maher should know about has-beens and dicks. I mean, he is both. Seriously… does anyone think this evil moonbat is funny? He’s detestable. He’s right on one thing though, Bruce (I refuse to call him Caitlyn) Jenner is not Rosa Parks. I don’t think he really knows who he is. He seems to have been confused his whole life. He went from Olympic gold medalist, to reality TV patriarch, to a woman and a joke in the span of his lifetime. Now, he’s landed a lucrative cosmetic gig at the hot age of 65. And America is fixated on this farce. Because no one wants to pay attention to our rights being shredded or to an impending World War when you can watch a rich athlete, who has scuzzy celebrities for family, morph into a woman and the icon for transgenderism. Wow, now I really get why Rome fell.

Maher just loves to offend everyone. But while he’s telling others to kiss his arse, he can kiss mine. He’s an unfunny, evil little goblin clown with his own car. I just love the way he goes on about Jenner and smears Limbaugh while he’s at it. But if he’s going to talk about making his Johnson disappear, he doesn’t need to. He doesn’t have one – he just is one. His audience laughs and applauds away at his crassness. Before calling others perverts and freaks the way he does of Hastert and the Duggars (while slamming Christianity), he should take a long look in the mirror. His schtick covered transgenders, gays, child molesters, female Viagra and politics. What wholesome entertainment from an ignorant, twisted little man. It disturbs me that so many watch him and it speaks volumes on the degradation of America. He’s the weasely icon of the Left with slicked back hair and a vile personality.

No way I’m going to try and follow that one by the Noisy Room! I’m even afraid it will slip out that I used to enjoy ‘Politically Incorrect ‘ now and then, back when I still watched TV! Believe it or not Maher’s frequent guest on that show was none other than Arianna Huffington, whose politics back then made Ronald Reagan’s look center Left. She’s definitely done a 180. Of course, Bill Maher was a lot funnier back then too.

Mr. Maher please step up for your Weasel!

President Obama and his administration apparently haven’t had enough time—though it’s been more than a year—to develop a strategy to combat the anti-American terrorist group known as the Islamic State. But the Department of Defense has certainly found enough time and money to celebrate June as “Pride Month” at the Pentagon and highlight the “husbands” of top male generals.

DoD News quotes Defense Secretary Ash Carter as saying that diversity and inclusion are critical to recruiting and retaining the force of the future. He made the comments at Tuesday’s Lesbian, Gay, Bisexual and Transgender (LGBT) “Pride Month” event held at the Pentagon.

Surveys show about one or two percent of the population is homosexual, and the percentage in the military is probably even lower. Yet, considerable Pentagon resources are now being devoted to highlighting their involvement in the Armed Forces and getting more of the LGBT community to join.

This month’s rainbow-colored Pentagon “pride” poster celebrates “victories that have affirmed freedom and fairness,” to quote President Obama, except for the more important but elusive “victory” over the Islamic State.

Obama’s embarrassing disclosure about having an incomplete strategy to win over global Islamic terrorism has certainly received its share of media attention. “We don’t have, yet, a complete strategy,” he said. “The details are not worked out.”

The comments were followed by a report that the Islamic State is more of a tough fighting force than previously believed because the wives of the leading terrorist figures in the group “may play a greater role in operations and communications,” and the U.S. has been ignoring them, according to CNN.

Perhaps we ought to be paying more attention to the wives of terrorists than the husbands of male generals.

Indeed, the “wife” or “husband” of a top U.S. general was on display during the Pentagon gay pride ceremony on Tuesday, as reported by Rowan Scarborough of The Washington Times.  He noted that Brigadier General Randy S. Taylor introduced his husband, Lucas, at a Pentagon event on Tuesday. Another top Pentagon official, Air Force General Counsel Gordon O. Tanner, also has a husband.

In Obama’s Orwellian Armed Forces, two men make a marriage, even if one takes the title of “wife” and the other “husband.” Or, perhaps, both are husbands. Who knows? I may have to consult the National Lesbian & Gay Journalists Association for the latest instructions on the correct terminology.

In any case, while the Islamic State deploys women as trained killers, our Pentagon is celebrating men as “husbands” for other men.

“Gen. Taylor was the master of ceremonies for the Pentagon’s 4th Gay Pride celebration that showcases a month of gay-themed posters and history,” The Washington Times explained.

The paper added that “A panel discussion featured a gay Marine officer, a gay Army sergeant who is a criminal investigator, a lesbian chaplain and a transgender, Amanda Simpson, who is executive director of the Army’s Office of Energy Initiatives.”

The old Army slogan, “Be all that you can be,” has certainly taken on new connotations.

While it’s apparent that not enough time and attention is being devoted to killing terrorists who threaten America, the DoD has developed a sophisticated PowerPoint presentation on LGBT progress in the Armed Forces.

Developed by the Defense Equal Opportunity Management Institute at Patrick Air Force Base in Florida, the presentation highlights the June 1969 riots at the seedy, Mafia-run Stonewall Inn as the beginning of the gay rights movement. (Obama wants to make this gay bar a national historic site.)

The PowerPoint presentation describes the genesis of the rainbow flag, noting that the most common variant consists of six stripes, with the colors red (life), orange (healing), yellow (sunlight), green (nature), blue (serenity), and violet (spirit). “The flag is commonly flown horizontally, with the red stripe on top, as it would be in a natural rainbow,” it notes.

This is important, since the rainbow flag, under Obama, seems to be assuming equal prominence with the traditional Stars & Stripes over some U.S. embassies abroad.

As a side note, it appears that the Defense Equal Opportunity Management Institute has had its own share of problems. The Army colonel in charge of the institute was temporarily reassigned to other duties pending an investigation of alleged misconduct involving “inappropriate touching.”

The Institute has been posting special “facts” about gay pride month, including this one about the origins of the homosexual rights movement: “the Mattachine Society, the first national gay rights organization in the U.S., was founded by Harry Hay in Los Angeles, California. The society sought to change the way homosexuality was viewed by the American public, to integrate homosexual people into mainstream society, and to ‘eliminate discrimination, derision, prejudice and bigotry.’”

That’s interesting, as far as it goes. But what goes unreported is the fact that Hay. the father of the gay rights movement in America, was a communist who was divorced by his wife on the grounds of extreme cruelty.

Anybody whose vision has not been colored by the shades of the rainbow flag can see that America has gone soft, to the point where even the Department of Defense has gone over the edge. Few in the media have the integrity to point this out.

There can be no doubt that Obama’s fundamental transformation of America is well underway and that the Commander-in-Chief is proud of himself for what he has done. Indeed, Obama, in his official proclamation of “LGBT Pride Month, 2015,” referred to the proud legacy LGBT individuals have “woven into the fabric of our Nation…”

It appears that over the past several years, Obama has been acting as a seamstress, weaving things into the fabric of America that didn’t exist until he took office.

Left behind in the wake of this exercise in building a new nation are the remnants of the old America—traditional values, a strong military, and a constitutional system based on free enterprise and limited government.

It will be extremely difficult to undo the damage.