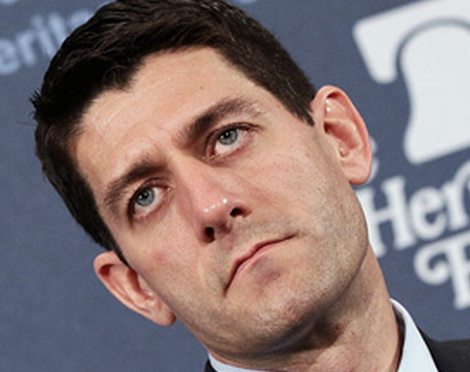 Don Surber: Paul Ryan said of the trade bill he supports: “It’s declassified and made public once it’s agreed to.”

Who knew that Paul Ryan is a Mustela Pelosi?

Another Democrat masquerading as a Republican.

Ask Marion: My nominee for Weasel of the Week is Rep. Paul Ryan and his Congressional GOP Establishment compatriots, Speaker John Boehner, Rep. Kevin McCarthy and Senator Mitch McConnell, who did everything short of holding a gun to the heads of GOP conservatives to get them to vote in favor of Obama’s global governance ObamaTrade bill promoted under the guise of ‘free trade’.

But perhaps one of the most telling events of the week was Paul Ryan’s Gaffe and morphing into Paul Pelosi. Rep. Paul Ryan (R-WI) the 2012 GOP VP Candidate, a chief proponent of ObamaTrade, finally showed his true colors and admitted that the process he was promoting was highly secretive. It was a true Pelosi moment, “You will have to pass the trade Promotion Authority bill ‘before seeing the documents and trade agreements coming in the next 60 days’, so ‘we’ in Congress, can determine the outcome of these trade agreements… not what’s happening out there right now.” That statement was also followed by an attack by Ryan on Breitbart News and Drudge.

Wow, did we not already learn our lesson of how this kind of thing works out with ObamaCare?

The Noisy Room: My nomination this week is Councilwoman Janet Dixon of Wellston, Missouri for getting an entire police department fired because they arrested her and her son.

What’s a corrupt city Councilwoman to do? Her son gets caught dealing drugs and confesses… then there’s the domestic violence and the fact that the Councilwoman herself was in possession of a defaced firearm. She got the arresting officers fired twice and then cuddled with the Mayor and got the whole police department disbanded. That’s 23 officers… just for following the law and doing their jobs. Imagine that. Since when can a City Council and the Mayor just ‘decide’ to disband the police department? That screams of a level of corruption that is jaw dropping. Naturally this would be a suburb of St. Louis – you know, the Ferguson stomping grounds. I’m sure this had nothing to do with cop hatred at all or racism. Right.

It would seem that not all of the council members are corrupt – at least one strongly opposed what was done. No one is buying the Mayor’s weak excuse of budget cuts and sharing resources. It’s pretty obvious to everyone what this is. A Councilwoman on a power trip feels she and her family are above the law. And if the police won’t give them a pass, get rid of them. This is how far morally and ethically our cities have sunk as of late. Former Police Chief G.T. Walker decided to not come back as well because the other officers were let go – it would serve Wellston right if the city just devolved into a Mad Max scenario and chaos took over.

Evidently they want the police to be there for only ‘certain’ crimes and to be selective on who they arrest. It feels a lot like communist Russia in Missouri these days and it is spreading across the nation. Dixon is a thuggish weasel who combines politics and criminality seamlessly.

The Independent Sentinel: How do you choose? There’s the English teacher who won’t teach Shakespeare – he’s just the long-dead British guy, then there’s the fake black person Rachel Dolezal, we mustn’t forget Frederika Whitfield who said the shooter of the Dallas police headquarters was ‘courageous and brave’, and so many others.

I settled on Asghar Bukhari, the founding member of the Muslim Public Affairs Committee UK (MPAUK), who said zionists broke into his house and stole one of his shoes. His evidence is that only one shoe was missing and he always puts them in the same place. What other explanation could there be, he asked in all seriousness. After he became the subject of much mockery on Twitter he made a video with an even lengthier explanation, just as bizarre.

The Razor: Should we just skip the submissions and go with Rachel Dolezal?

Especially after Smoking Gun is claiming she sued Howard U for discriminating against her for being white.

This puts her in whole new class of super-weasel in my book.

Puma By Design: Rachel Dolezal lied, committed fraud, sued Howard University, lied about living in a teepee. Dolezal was determined to be a victim by any means necessary. Dolezal is a mega weasel.

Nice Deb: I’ll nominate Senator Bob Corker just to give Rachel some competition – but she’s obviously this week’s weasel to beat… Corker’s the guy who brokered the Fail Theater known as “Iran Nuclear Agreement Review Act of 2015” in the Senate, and is now pretending to be shocked and dismayed that Obama’s nuclear agreement is terrible (something we’ve all known for months).

Instead of insisting that the final agreement be regarded as a treaty, requiring the support of two-thirds of the chamber for ratification, Corker proposed letting naysayers try to block the treaty with a resolution of disapproval instead. The resolution could be filibustered by Democrats before it’s enacted, or it could be enacted and then vetoed by Obama.

Corker made it possible for Obama to concede as much as he likes without fear of legislative consequences. And now he’s pretend-surprised to find O in concession mode with Iran.