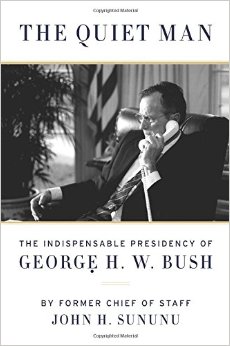 John Sununu, former New Hampshire governor and Bush chief of staff has written a poignant book: “The Quiet Man: The Indispensable Presidency of George H. W. Bush.” While I did not always agree with President Bush’s policies and he was far too Progressive on taxes and the Constitution for my tastes, there is no denying he was a great leader in his own right. Far more so than the Marxist we now have leading the country.

When H. W. Bush came into office, he followed one of the greatest presidents to ever lead the nation – Ronald Reagan. Even with the wild success that Reagan brought us with Bush as his VP, when Bush took office the Democrats controlled both the Senate and the House. The Iran-Contra affair was front news and Bush had an uphill fight ahead of him. As I’ve contended many times, the Cold War never ended… it shifted and Bush still had his hands full with the Russian bear. Bush was a master diplomat and strong military strategist – the Gulf War and dealing with Panamanian dictator Manuel Noriega are testimony to that.

Sununu contends that Bush’s presidency was misunderstood and underestimated. I agree with that. The man accomplished a great deal not only in foreign policy, but domestically. But he was not arrogant about it and went about leading the country quietly and competently. He managed to control Congress and heal the rift there somewhat, although I think far too much concern is placed on placating the other side. Bush salvaged a failing savings and loan program and managed to get major legislation passed even with liberals blocking him at every opportunity. There is no doubt that Bush reduced the deficit, albeit in a very unpopular way by raising taxes. He deregulated energy companies, passed the Clean Air Act, pushed through a major crime bill, touted child care legislation and saw the Americans with Disabilities Act come to fruition. All of those were major accomplishments, although not all of them were the right move in my opinion.

Here’s Amazon’s summation of the book:

In this major reassessment of George Herbert Walker Bush, the 41st president of the United States, his former Chief of Staff offers a long overdue appreciation of the man and his universally underrated and misunderstood presidency.

“I’m a quiet man, but I hear the quiet people others don’t.”—George H. W. Bush

In this unique insider account, John H. Sununu pays tribute to his former boss—an intelligent, thoughtful, modest leader—and his overlooked accomplishments. Though George H. W. Bush is remembered for orchestrating one of the largest and most successful military campaigns in history—the Gulf War—Sununu argues that conventional wisdom misses many of Bush’s other great achievements.

During his presidency, the Berlin Wall fell and the Soviet Union collapsed. Bush’s calm and capable leadership during this dramatic time helped shape a world in which the United States emerged as the lone superpower. Sununu reminds us that President Bush’s domestic achievements were equally impressive, including strengthening civil rights, enacting environmental protections, and securing passage of the Americans with Disabilities Act and the 1990 agreement which generated budget surpluses and a decade of economic growth.

Sununu offers unparalleled insight into this statesman who has been his longtime close friend. He worked with Bush when he was vice president under Ronald Reagan, helped him through a contentious GOP primary season and election in 1988, and as his chief of staff, was an active participant and front-row observer to many of the significant events of Bush’s presidency. Reverential yet scrupulously honest, Sununu reveals policy differences and clashes among the diverse personalities in and out of the White House, giving credit—and candid criticism—where it’s due.

The Quiet Man goes behind the scenes of this unsung but highly consequential presidency, and illuminates the man at its center as never before.

Bush wasn’t a hipster who had sex in the Oval Office or pushed ‘change’ in the guise of Marxist policies. He was a traditional leader who had principles. He put the country first and his own wants second. Someone might want to teach that to Barack Obama.

Sununu does a masterful job of telling Bush’s story and bringing facts to light. There are colorful personal stories as well as historical engagements. Then there is the age-old tale of the battles with the media, which we are all too familiar with these days. Sununu’s account is a fascinating glimpse behind the scenes and at the life of George H. W. Bush. It’s a fantastic read.

My feeling is that Bush was a very good president. He was courageous, understated and everything a good leader should be. Compared to the leader we have now, he’s a giant. Bush is a humble man and by all accounts that I have heard, a good man. His legacy for America will be anything but quiet. Perhaps it will drown out some of the damage done by Barack Obama. I heartily recommend “The Quiet Man: The Indispensable Presidency of George H. W. Bush”… it is one you and your children should read to understand American political history as it actually happened.