As a general matter, presidential poll numbers this far before an election, especially with a field as large as the current Republican one, do not tell us much.

But the NBC News poll out this evening following the first 2016 Republican presidential debates — notably showing Sen. Ted Cruz surging to the number two spot in the field with 13 percent support among likely Republican primary voters — may reveal something worthy of interest. 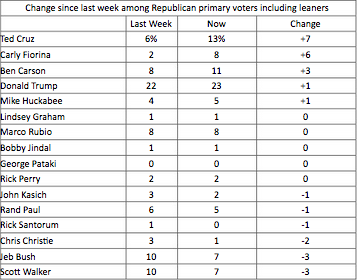 If you watch the Sunday shows as I do not just for Twitter fodder, but as a proxy for how the (bipartisanly progressive) political establishment sees the world, and seeks to craft narratives to ensure that its vision remains preeminent, you will note that Sen. Ted Cruz was among the only Republican presidential hopefuls not appearing on any of this morning’s programs.

How could it be that Sen. Cruz could be met with essentially a media blackout, even taking into account that the results of the NBC News poll were embargoed until this evening?

Some possible reasons include that:

(i) The media does not think Sen. Cruz has a chance to win the nomination.

(ia) The media is genuinely ignorant of Sen. Cruz’s level of support among Republican primary voters, or thinks such support is fleeting.

(ii) The media does not think Sen. Cruz poses a serious threat even if he were to somehow win the nomination, and thus feels he ought to be ignored.

(iii) The media fears Sen. Cruz and wants to provide him as little exposure as possible.

(iv) The media would rather channel its efforts towards discrediting the Republican party by focusing in particular on Donald Trump as a bombastic, “binders full of women” carrying racist. [The majority of Trump’s actual positions of course are not worthy of reproach to much of the media.]

I leave it to you the reader to make an assessment as to which of these explanations is most plausible.

But it is worth noting that Sen. Cruz has been a fixture on the Sunday shows since he was elected to office, in large part because the political class believed he could be attacked as an intransigent conservative “Teahadist,” as contrasted with supposed “mavericks” like Sen. John McCain, who are more than willing to embrace progressivism wholesale.

As Sen. Cruz and other conservative candidates hang around in the field, it will be interesting to see if the media shifts from the silent treatment to tacit acknowledgment to outright ridicule, or if the media’s hubris and/or ignorance will blind it to threats worth considering.

To his credit, The New Yorker’s Jeffrey Toobin recognized such a threat. Will others?

One thought on “New NBC Post-Debate Poll Shows Ted Cruz at No. 2, But the Sunday Shows Stiffed Him”