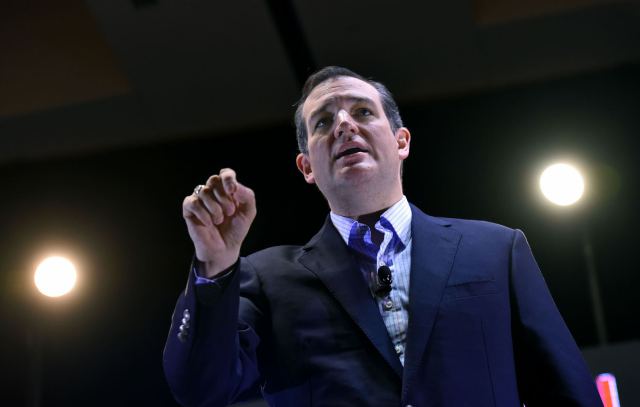 Ted Cruz is Cruz’n South to the SEC Primary where everyone else isn’t. The South is #cruzcountry! Ted is on a bus tour of southern states that will play a key role in selecting the Republican nominee and the response so far has been overwhelming – overflow crowds everywhere so far. He’s a rock star in Alabama and Tennessee and will absolutely bowl them over here in Oklahoma. Feel that? It’s history stirring as the South’s favorite son is welcomed home. Ted Cruz is touring with his lovely wife Heidi and adorable daughters, Caroline and Catherine. I believe his father, Rafael Cruz, is on part of this tour as well. Cruz, decked out in ostrich boots with Texas stars on his belt, came to break bread down South. Ted’s stops are multi-generational as he reaches out to all ages and all walks of life. People relate to Ted Cruz on a familial level.

The wave is growing:

After the debates last week in which Ted Cruz landed second place behind Donald Trump, Cruz had another surge in donations. Then Cruz blew them away at The RedState gathering. See for yourself:

I have been impressed with Ted Cruz from the beginning. He’s a Statesman and has a spine of steel. He knows exactly what needs to be done and how to do it:

You can add another big one to that list – going after the corrupt Washington Cartel.

Cruz is drawing huge crowds on his Southern tour. They love him and the Reaganesque principles he stands for. Cruz harkens back to a time when we were moral, prosperous, free and a world power. Americans hunger for that. Yes, they are angry, but they want a leader that will get things done and bring dignity back to the presidency. Americans by nature are creators, not destroyers and we all know we have massive repair work ahead of us after eight years of Marxist free-fall. Cruz is the man to lead the country on that journey. I’m convinced of it.

In restaurants and conference rooms, Cruz is speaking to southerners and they are listening. The South will play a huge role in the Republican primary and Ted Cruz has asked the South to dance with him. Eight southern states are slated to cast ballots on March 1, nicknamed the “SEC Primary” after the top-performing college football conference that voters here cheer. And they love their football here, trust me. Because of this, Cruz is bypassing New Hampshire and instead is touring the heart of the South – places like Murfreesboro, Tennessee and Van Buren, Arkansas. He’s appealing to Christians across the South and the true heart of conservatism here in the US. Instead of hoofing it in Iowa, Ted Cruz is going to those places others ignore and is building a grassroots movement that will sweep the nation. 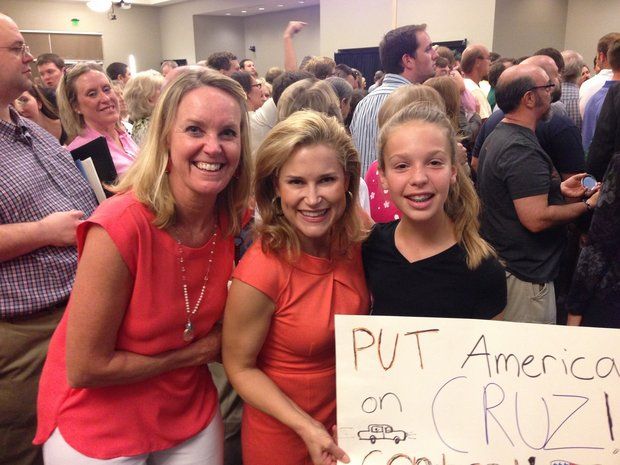 Ted Cruz, a Tea Party favorite and a protege of Sarah Palin, speaks to what everyday Americans see as pressing issues: taxes, the Constitution, illegal immigration, Obamacare, jobs and gutting the DC Progressive establishment. His father is an evangelical pastor and one of the finest speakers in the world. Plus, he’s just a great guy who has earned every penny he has ever made and has succeeded despite the odds. He made it the old fashioned way… the hard way. Americans love that. Cruz is a rebel and fighter. He’s a scrapper and doesn’t play by DC’s rules. He’s his own man, something America hasn’t seen in politics in a long time. He also prays and is not ashamed of his Christian beliefs. When everyone else dog piled on Donald Trump, Cruz would not say anything bad about him and stood by him. That’s just the kind of man he is.

Trump is a phenomenon and whether in the end there is an alliance or Ted Cruz benefits from those following The Donald, it doesn’t matter. In my opinion our best choice for Commander-in-Chief is Ted Cruz and the political landscape has changed in America forever, regardless of whether the politicos like it or not. Cruz will do what needs to be done to save our nation – that’s something you can count on.

The Cruz campaign believes its path to victory rests on a slow, slog-it-out winning of delegates in states that award them proportionally like these. So with at least 356 delegates up for grabs in the South on March 1, the campaign is placing a particularly large emphasis on the SEC primary, especially in Georgia, where the campaign has many financial ties, and Texas, the popular senator’s home state.

That’s in contrast to campaigns like Scott Walker, who has set the expectation the he needs to win the Hawkeye State outright, or Chris Christie, who is camping out this summer in New Hampshire and betting his political fortunes on one state’s voters.

No Cruz swing yet epitomizes that post-Iowa mentality like this one, though trips later this summer will take him to far-flung states like Wyoming. Cruz’s visit here Sunday was his second recent chance to woo Alabama voters — he called into a group of Republican activists in Coosa County, a few weeks ago — and he’ll return for a third when he headlines the Lincoln-Reagan dinner in Tuscaloosa in just two weeks.

“The South is looked down upon as being backwards and behind the times and made fun of,” lamented Jodi McDade, the Coosa County Republican chair who hosted the Cruz call and is backing him. “We’re now going to stand out and show the rest of the country that we’re leaders down here.”

Voters interviewed across Alabama on Sunday said they saw the SEC primary increasingly as a point of regional pride. In a ruby red, relatively poor state, Democrats have little reason to come here.

Now, some Republicans say they can sense their new power.

“The media gives us such a beating. Right now we’re going through all the brouhaha over the Confederate Flag and refighting the Civil War,” McDade said. “The notion that we’re all toting our sheet and white top hat and stuff is so wrong, and I’m hoping that’s what people will see.”

Cruz can sense it too. The candidate is hoping to do well in Iowa and South Carolina — though top-three finishes in either state is in no way guaranteed — but he is staking much of his political fortune on the SEC states that vote only ten days after Republicans in the Palmetto State. Last weekend at a donor summit hosted by the powerful Koch Brothers, Cruz said these southern states were his “firewall.”

“The energy we’re seeing in the great state of Alabama is powerful. I feel like we’re at the Iron Bowl,” Cruz told reporters in the Birmingham suburb of Pelham, referring to the yearly showdown between Alabama and Auburn. “It is our hope to win the Alabama primary.”

Between a “Biscuits and Gravy” breakfast one day and a “Down Home” Breakfast the next, Cruz is endearing himself in the Bible Belt to voters far and wide. Southern hospitality can’t get enough of the Texan. He gets standing ovation after standing ovation and whole families turn out. Parents want their children to see what a real leader is like and to witness history in the making. 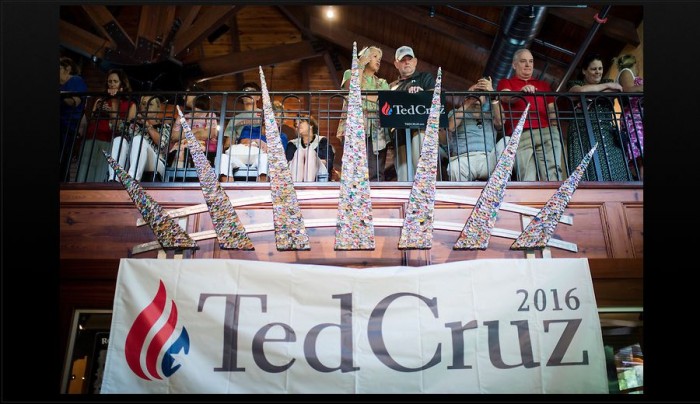 “The RNC changed the primary calendar this year, so that the entire primary is accelerated. You’re going to have the first three primaries — Iowa, New Hampshire, South Carolina — and they’ve always been critically important. They will remain critically important,” Cruz said. “But then just two weeks later: boom, we hit Super Tuesday. We hit primaries all across the country, primarily across the South, big states that are expensive to be on media, and it’s so fast that any campaign that hasn’t done the hard work of building a grass-roots team, putting in place strong leaders, is going to find themselves behind the eight ball because there’s not enough time.” Cruz is brilliant and has done his campaign homework, so he will have an advantage definitely in the South.

Cruz has pledged to reject “mealy-mouthed statements about acceptance and surrender.” I find that refreshing. I already know that the very first thing he will do when he is president is repeal Obamacare. He will also “rip up and rescind” the monstrous Iranian nuclear deal. There is literally no stronger ally and proponent of Israel than Ted Cruz. He’s a truly strong leader who will propel us into being a superpower once more and make us strong militarily and put our enemies on notice. One of Cruz’s biggest hits is: “I cannot wait to stand on the debate stage with Hillary Clinton. And to make clear if you vote for Hillary you are voting for Iran to have nuclear weapons.”

But Ted Cruz’s harshest comments are saved for fellow Republicans, or should I say, RINOs who crawl into bed with Progressive Marxists and then feign innocence and impotence. Turncoats such as Mitch McConnell who Cruz has openly called a liar on the Senate floor. “What exactly has this new Republican majority accomplished? Nothing? It’s actually worse than that,” he said, ticking through deals struck over budget plans and high-profile Obama appointees. “In this case, our team is playing for the other side.” And that is it in a nutshell, folks. We are infiltrated with political double agents. He added: “Here’s one simple question: Which of those decisions is one iota different than it would have been with [Democrat] Harry Reid in the Senate?” Not a one of them. Nada. And I love this line: “Are you looking for a meaningless showboat, or do you actually want leadership?” Well, do ya?

Cruz set a fire alight in the very beginning of all this at Liberty University:

“I believe in the power of millions of courageous conservatives rising up to reignite the promise of America,” he declared, “and that is why today, I’m announcing that I’m running for president of the United States.”

Cruz is a conservative’s conservative. Ronald Reagan would have been proud to call him a friend. On issue after issue, Cruz has thrown his lot in with those fighting the entrenched Republican elite, all but daring his primary rivals to outflank him on the right. Cruz has reiterated his commitment to repealing “every word” of Obamacare. He called for “abolishing the IRS” and the establishment of a flat tax that allows Americans to file taxes on a post card. He asked his audience to “imagine a president that finally, finally, finally secures the border.” He condemned the federal government for waging an “assault” on religious liberty, and stressed the need to “defend the sanctity of life” and “uphold the sacrament of marriage.” He called school choice “the civil rights issue of the next generation,” and said he’d like to see the “common core” state education standards abolished. That’s music to my constitutionalist ears.

I ask you America, isn’t it time we put America on Cruz Control?