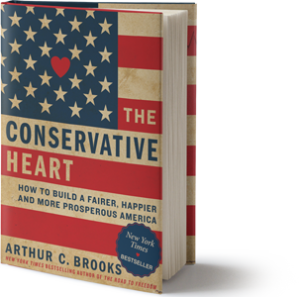 I had the pleasure of reading Arthur C. Brooks, The Conservative Heart: How to Build a Fairer, Happier, and More Prosperous America. His book lays out an optimistic and uplifting vision of conservatism. Something that weary conservatives hunger for.

Mr. Brooks is a renowned economist and the president of the American Enterprise Institute. In his book, Brooks puts forth that it is time for a change. A time to switch from the traditional focus on economic growth and social values, to a new focus on helping the needy and those in want without bankrupting us and our children’s future. The book goes into fighting poverty, promoting equal opportunity, celebrating success and the importance of religion and faith.

Brooks focuses on four “institutions of meaning” — faith, family, community and meaningful work. They are the bedrock for personal happiness and national well-being. The book combines not only reporting, but research and case studies.

For as long as I can remember, the Republican Party has been viewed as being comprised of rich Republicans who are just shy of being a collective community of Scrooges. That has never been true and if you look at the Democrat Party closely, you will see that the wealthy in both parties tend to be the most powerful. The Dems are wealthier than the Republicans in many, many cases. They just have a different letter after their names.

Brooks is advocating a conservative approach to addressing income inequality. Here’s a taste:

Brooks argues in favor of conservative principles such as not increasing the minimum wage. Raising it as the Progressives are doing (massively, I might add), causes businesses to hire fewer workers, raise their prices and in many cases, close their doors. People should have to earn their success and I absolutely agree with that. It does indeed lead to personal happiness and fulfillment. In the end, the ones that are hurt the most by raising the minimum wage in this manner are the poor, who wind up having no job at all. Brooks promotes the earned-income tax credit for the poor. And I agree with him on that point.

It is issues like this in which Brooks is calling for a conservative rebranding of social issues. They are still conservative in nature, but put forth in a more attractive package that appeals to more people.

The final chapter in his book is entitled, “The Seven Habits of Highly Effective Conservatives.” The chapter goes to the heart of conservative language and how politicians can utilize it to show that conservatives are just as compassionate and have just as much empathy for the downtrodden as the Left has. The Right needs to be seen as the moral champion of Americans and that they stand for a better opportunity for success and way of life for everyone concerned.

Brooks believes that first impressions are everything. You can argue politics and logic later, but first you have to win someone over, heart and soul. The mind comes second, emotions come first. He promotes that you have to address what people feel first, because whether you win over someone or not, it is decided in the first few seconds. It’s an instinctive and quick judgement. Brooks believes approaching politics in this fashion will win the White House.

As a Constitutional Conservative, a number of these issues are hard for me to accept and deal with. The book makes for compelling reading, especially if you are into politics. Considering the fight we face for the presidency in 2016, I would recommend you read this book and consider Brooks’ arguments carefully. The book is well-written and a good read. It’s full of issues that deserve consideration and pondering.

I want to close with the a promo on the last chapter of the book – it is excellent:

The Seven Habits of Highly Effective Conservatives: How to Talk So Americans Will Listen

According to Brooks, the term “conservative heart” is often believed to be an oxymoron. Through his research, he found that despite conservatives giving more to charity than liberals, though they have less income on average, ordinary Americans believe conservatives don’t care about them. In fact, Brooks found that “conservatives have the right stuff to lift up the poor and vulnerable – but have been generally terrible at winning people’s hearts.” In essence, conservatives have a problem with messaging.

To help combat this, Brooks has come up with seven lessons to help conservatives relay their thoughts properly so Americans will listen. They include:

1. Be a moralist. No matter the topic, never start with what you want to talk about; start with the why. If you lead with your heart you’ll have a better shot at winning people over.

2. Fight for people, and against things. Conservatives should stop selling data, facts and figures, and start selling happiness and better opportunities.

3. Get happy. Good humor has to be authentic or people see through it in an instant. To be a happy warrior, you must genuinely be a happy person.

4. Steal all the best arguments. Most Americans don’t want to choose between compassion and morality, or between leadership and empathy. They want leaders who have all these traits, so expand your moral imagination and trespass on your opponent’s traits.

5. Go where you’re not welcome. Our goal for conservatives is not to remain a motivated minority. To do this you have to get out of your comfort zone, attract people who don’t see things the same way and enlist them to the cause. This includes the true believers, the persuadables and the hostiles.

6. Say it in 30 seconds. A great speech treats the first opening seconds like the scarce and valuable commodity they are. First priority in making a good impression? Don’t blow your opening lines.

7. Break your bad habits. The old way isn’t working. It’s not time to change the message: it’s time to change the way it’s delivered. Don’t be afraid to give up what’s comfortable for something that is scary, but has an opportunity for success.