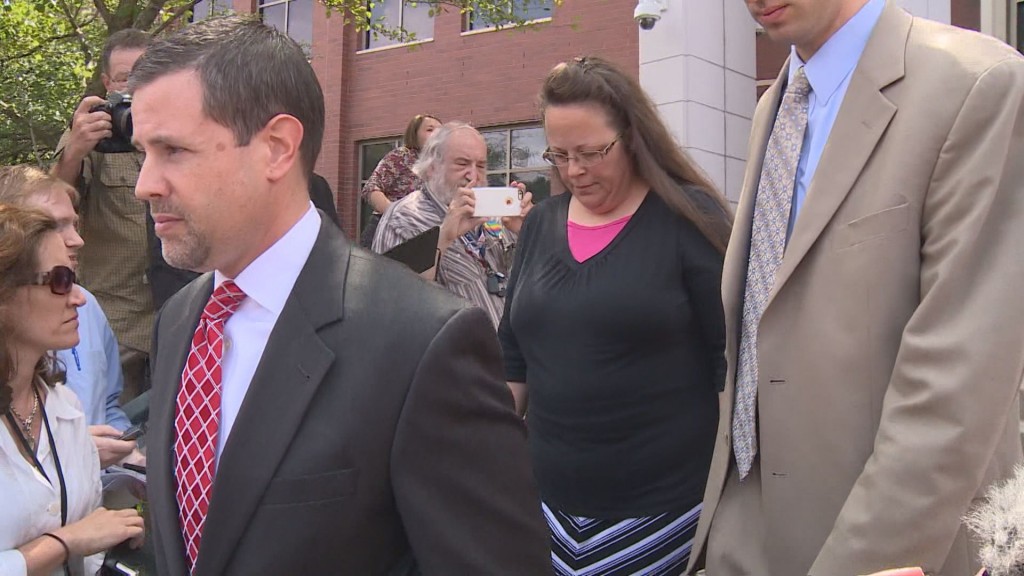 Every week on Monday morning, the Council and our invited guests weigh in at the Watcher’s Forum with short takes on a major issue of the day, the culture or daily living. This week’s question: Kim Davis And Gay Marriage Licenses: Civil Disobedience Or Bigot?

Rhymes With Right: Simply put, this is not an either/or question.

And that is the key thing that Kim Davis and her supporters are missing here. Crying “civil disobedience” is not a talisman that shields you from punishment or a “get out of jail free” card. As exemplars of civil disobedience like Thoreau, Gandhi and King show us, civil disobedience requires submission to the rule of law as a means of shocking the consciences of others in order to spur change.

But in Kim Davis’s case, there is another angle that should be considered. Davis is not acting as a private person here; rather, she is acting in her official capacity to deny the citizenry that which the law and the Constitution require she give them in that capacity — a legal document granting legal recognition to their marriage. One can strongly argue against the holding in Obergefell (and i do) and still recognize the danger to liberty and the rule of law that her actions represent.

Of particular concern to me is Davis’s abuse of the First Amendment to justify her malfeasance in office and defiance of a court order. She claims the right to not only refuse to issue marriage licenses herself, but to also forbid every employee of her office from issuing them. That has the effect of officially establishing her religion as the official religion of Rowan County. And while one might be tempted to cut her slack because of the relative ease with which couple could work around her decree and the troubling nature of the Obergefell decision which created this situation, one has to look at other situations. Would we accept the declaration of a county prosecutor that there will be no prosecutions of spousal rape because she believes that allowing her office to move forward with such cases would violate the Biblical principle that wives must submit to their husbands? Of course not — the very notion is offensive to anyone with a sense of moral decency, no matter how broadly we interpret the First Amendment’s religious liberty guarantee.

So let me be quite clear on this matter — regardless of the sincerity of her faith (a matter that has no bearing here) Kim Davis belongs in jail until such time as she either agrees to a) issue marriage licenses to all legally eligible couples, b) stand aside and allow her subordinates to do so for her, or c) resigns or is removed from her position and county clerk. If this spurs a change in the national attitude towards gay marriage and results in a reversal of Obergefell, perhaps her short-lived effort to make her faith the established religion of Rowan County will have had some positive impact. Until that time, let her failed claim of privilege serve as a reminder that the rule of law requires we abide by a court order until it expires or is overturned on appeal, even if we believe it is wrong and in violation of our rights.

The Glittering Eye: It’s a thorny issue. On the one hand, since Obergefell v. Hodges homosexual marriage is the law of the land and there’s some merit to the idea that if a public employee can’t perform his or her job she or he should resign.

On the other hand that flies in the face of the last 70 years of labor law. Employers have an obligation to make reasonable accommodations for the religious obligations of their employees. Kentucky, specifically, has a RFRA law that extends that not only to public employees but to elected officials. I would also argue that demanding that public officials who cannot comply with some of the obligations of their job for religious reasons resign violates the “No Religious Test” clause of the U. S. constitution.

IMO the judge in this case erred in throwing the county clerk into jail. There were plenty of other remedies available. He could have ordered a recall election and then fined the county if she were retained and failed to comply. He could have thrown it back to the Kentucky legislature to place the onus on them to change the laws requiring the county clerk’s signature on all marriage licenses issued by their counties.

We’re now engaged in a great experiment. After a half century of relentless propaganda, a slim majority of Americans and one half plus one of the justices of the Supreme Court believe that a just and decent society demands the legality of homosexual civil marriage. To date we’ve seen campaigns to force people to comply with court orders that until very recently would have been considered immoral by the overwhelming preponderance of the people. Such is not the stuff of which persuasion is made. It’s also contrary to the promotion of liberal values in a large, diverse country in which reasonable accommodations should be made for the religious beliefs of all members, not just members with whom you happen to agree.

JoshuaPundit: My original feeling when I first heard about this was that as a public servant, Ms. Davis had a duty to perform that which the taxpayers had elected her to do.

After thinking it through, it’s very obvious that she could and should have been offered a reasonable accommodation for her religious beliefs and would have had the full might of the Obama Justice department behind her if she wasn’t a Christian and this wasn’t about homosexual marriage.

The Obama ‘Justice’ Department actually sued an Illinois school district because a Muslim school teacher’s request for three weeks leave in the middle of the school year to attend the Haj in Mecca (something that takes at most a week) in violation of her contract was denied. And they won, in spite of the fact that the Haj can be taken any time in a Muslim’s life…such as after retirement, or when sufficient sick days have been accrued.

I myself have received what are called reasonable religious accommodations under existing law. I once accepted a job at a financial corporation and was told several days into it that ‘Saturdays are mandatory.’

Once I explained that Saturday wasn’t an option for me and had they informed me beforehand I would not have taken the job, they were forced to make an exception in my case, albeit with quite a bit of rancor,nasty cracks and ill will that never dissipated for the short period of time I remained there. There’s no reason Kim Davis couldn’t have gotten the same kind of accommodation (especially since she worked in government) instead of being thrown in jail, but they simply wanted to make an example of her.

Only prog Fascists are free to ignore the law in Obama’s America. We’re in for an interesting 14 months.