It has become apparent to me that some of my readers, living outside of Israel but totally devoted to Israel, have an inflated sense of her potency.  And I want to start by addressing this.

That we should stand strong, for example, against the violence of Arabs, absolutely!  And I will have more to say about this below.

But this does not mean that Israel need not worry about international repercussions and that she is immune to all actions that might be taken against her in various spheres. Efforts to delegitimize Israel can cause considerable damage.  Sometimes prudent judgment is called for along with muscle flexing.  About this whole issue of the need for prudent judgment, as well, I will have more to say below.

These are the choppy waters.

Since yesterday, there have been more terror attacks.  Good that announcements have been made about measures to be taken, but we need them in place like yesterday.  Some plans, such as installing cameras, will take time. But the troops – empowered to act as they need to – must be out in force.

One of the trouble spots with regard to rock throwing and similar terrorist actions has been in the vicinity of the Jewish community of Tekoa, in the Judean Desert.

Terrorists are fond of throwing rocks at the cars driving on the road from Tekoa to Jerusalem (a new road, not represented on this map, that goes to the Har Homa neighborhood of Jerusalem).  Of late there has been considerable difficulty in this region, with cars frequently pelted by rocks.

This morning terrorists went one step further: Tekoa resident Rivi Lev Ohayon was on her way to her job in Jerusalem, when she encountered some twenty young adult Arabs holding rocks and forming a human barrier across the road.  A man with a large rock came towards her, and then some 10 Arabs jumped on the car and broke her windshield.  One attempted to open the door of the car, but she succeeded in pulling away, in reverse, and calling police.  Deeply traumatized, she considers herself lucky that she was not lynched. 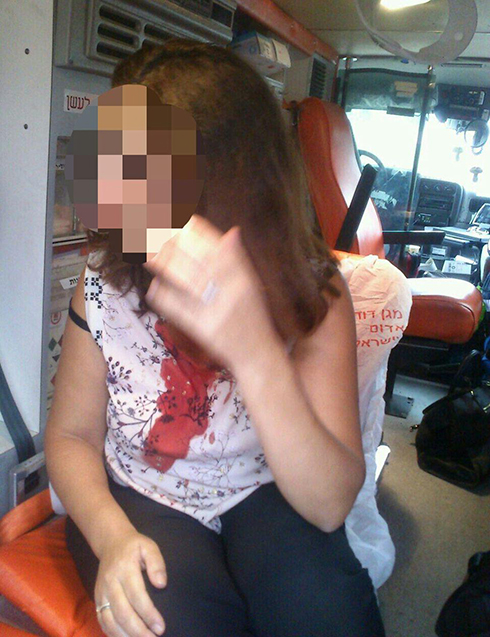 Seven other cars were stoned on the same road at that time.

None of this should happen.  Not ever.

Then, a bit later this morning, another attack in the Old City of Jerusalem, near the Lion’s Gate.  A young Arab woman knifed a man, stabbing him in his upper body.  He was carrying a gun, however, and shot her.  She is in serious condition.

Lion’s Gate is the location where the horrendous attack occurred that took two lives on Saturday night.  And in this location, too, there must be sufficient security presence – police, soldiers – to guard against such incidents.

A third attack took place in Kiryat Gat today, perpetrated by an Arab from Yatta – an Arab village in Area A, near Susiya – who was in Israel illegally. After alighting from a bus, he stabbed a soldier and grabbed his gun, then ran into an apartment building.  When he tried to force his way into an apartment, the resident fled, screaming.  Police were alerted and when they arrived the terrorist began shooting at them.  Returning fire, they killed him.

I want to look at the most recent game playing of that slippery manipulator, Mahmoud Abbas.

I doubt there is anyone reading this who does not know how much responsibility he bears for the current violence.  Just days ago, at the UN, he not only spewed incitement, he suggested that he was about to walk away from the Oslo Accords.

But yesterday, he was singing a different song.  And this was obviously because Netanyahu had announced sterner security measures.   A clear indication that the announced intention to enforce such measures had an impact.

Suddenly, Abbas was a man of peace. Sort of. What he said was:

“We want to reach a political solution peacefully, and no other solution.  We want to minimize the risks of destruction and loss that will sprout on all sides in the current situation.”

This was for public consumption.  He then qualified his remarks with more of his UN theme, putting the onus on Israel:

“We say to the Israelis: Stop building in the settlements and come to the negotiating table.  We will be willing to return to negotiations and discuss the agreements that have been violated and neglected by Israel since Oslo and until now.

This is the old Abbas “play both sides against the middle” technique, riddled with misrepresentations and distortions.

As to his statement that, “All our instructions to our agencies, our factions and our youth have been that we do not want escalation,” there is one main question to be asked:  Is this a blatant lie, did he not give such instructions?  Or do the Palestinian Arab factions and youth simply not care what he says?

I do not have answer, but we see the evidence, in today’s three incidents, that the violence has not abated.

It has been revealed by media sources that during the Security Cabinet meeting Prime Minister Netanyahu held Monday night, after the close of Simchat Torah, the issue of threats by Obama was raised.  Some of the right wing/nationalist members of the Cabinet (some within the Likud itself) were urging that part of the response to terrorism be increased building in Judea and Samaria.

This is not going to happen, Netanyahu informed them. For Obama has said that if there is building in Judea and Samaria, he will not veto a French resolution that is to be brought to the UN Security Council, a resolution that reportedly would declare “Palestine” a state and would declare the settlements “illegal.”

“We will not jeopardize international support for a declaration of building,” a senior source in the Netanyahu administration reportedly said,  While the prime minister himself called for “a sober political maneuver.”

“We are in a long struggle,” said Netanyahu, “and it does not need militancy, but rather it needs a lot of strength, a resolute attitude, much composure and thoroughness, and that is what we are doing.”

The question I want to explore, then, is whether Netanyahu simply “caved” to the US, as Arutz Sheva suggests, and as is his pattern, or whether he has valid reason to be cautious here.

My gut impulse is to say, damn them all, go ahead and build.  Now is the time for us to stand up for what is ours by right.  But I know that my gut impulse is not necessarily the wisest course of action.

In exploring precisely what IS the wisest course, I contacted two highly respected and knowledgeable international lawyers, and here share their responses.  Please, walk this through with me:

One lawyer, deeply involved in legal issues in Judea and Samaria, was interested in looking at the repercussions in terms of international law.

What those repercussions would be “all depends on whether any such resolution is adopted under Chapter 6 of the UN charter (non-binding recommendation) or chapter 7 (binding, action oriented).

“None of the existing resolutions were adopted under chapter 7, which can be used only in the event of a threat to international peace and security which requires military intervention. I can’t see that happening with us [he speaks as an Israeli].”

As I understand this, then, calling the settlements “illegal” would have no real legal import in terms of forcing Israeli communities out of Judea and Samaria.

As to establishing a state, it is, as I have indicated before (having discussed the issue with this lawyer before) that: “The UN doesn’t have the power to establish a state, but merely to accept existing states as members, subject to Security Council invitation.”

He does see it as possible (though unlikely) that such an invitation might be issued.

He predicts that Obama would be reluctant even now “to undermine the entire Oslo process in such a blatant manner.”  His opinion (this is not a legal opinion) is that a resolution would be tempered, and would “call for an immediate return to negotiations, with the aim of establishing a Palestinian state and recommending a freeze in settlements.”  All this, he says would not “really dramatically change the present situation.”

“But the settlement issue as well as that of Jerusalem have regrettably reached panic proportions thanks to very clever Palestinian manipulation of Obama and the EU and their evidently existing predisposition to harm Netanyahu and hence harm Israel.” (My emphasis added here)

The other lawyer, a man with sterling international credentials, chose to look at other, non-legal aspects of the issue (my emphasis added):

”The SC resolution would be very very damaging. Not because of any particular legal point, but because it would lock in a fundamental delegitimization of Israel, trigger a wave of EU sanctions, and make it harder for future US presidents to support Israel.

“If holding off on new building for now is the price of Obama’s veto, it may be worth it. However, there is no reason to believe he promised to veto the resolution. Rather, he may have threatened to NOT veto if we build. But that doesn’t mean that he WILL veto if we don’t – i.e., he is likely to NOT veto anyway.

“Unless Bibi has concrete assurances on this, it makes sense to assume there will be no veto and build anyway…His (Obama’s) promise may be worth something if made publicly or with some other additional indicia of reliability.”

What we see then is that this is not a simple matter and should be taken seriously, but received without panic.  It is not easy, being the head of a state that is isolated internationally and against which much venom is directed.

In the end it may well be that now is the time to stand up and claim our rights.  But I would not make light of Netanyahu’s hesitancy to move forward.

The good news for today? We’ve had rain. Heavy rain. The first of the season. After the terribly hot and dusty summer we’ve had it is particularly welcome. And it is considered a blessing. May many more blessings follow.

One thought on “Navigating Choppy Waters”