The press release outlet best known for its fanatical dedication to the socialist agenda — you may know it as The New York Times — has finally issued the Democrats’ long sought-after call for government confiscation of America’s guns.

It is a moral outrage and a national disgrace that civilians can legally purchase weapons designed specifically to kill people with brutal speed and efficiency.

Of course, the Times fails to note that the recent Paris terror attacks (and many other examples of mass shootings in Europe) occurred under strict gun control regimes. They refuse to describe how disarming law-abiding citizens might prevent killings by Jihadists and the criminally insane (but I repeat myself).

Oh, and box-cutters were used to kill 3,000 Americans on 9/11. A home-made IED killed and crippled more than 100 people at the Boston Marathon. Knives and automobiles are the weapons of choice these days for slaughtering Israeli Jews.

The enemies of mankind will always find ways to kill en masse. Disarming Americans is not only unlawful and functionally impossible, it is a predicate for more terror and tyranny. But The New Democrat Times knows that, of course. 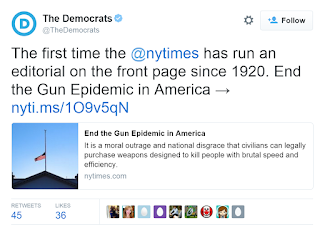 These are weapons of war, barely modified and deliberately marketed as tools of macho vigilantism and even insurrection. America’s elected leaders offer prayers for gun victims and then, callously and without fear of consequence, reject the most basic restrictions on weapons of mass killing.

Guns are tools of a free people, and are used hundreds of thousands of times a year — by the federal government’s own measures — to protect life and property. In fact, statistics indicate that crime would increase if gun ownership were to be further restricted.

As the Left likes to lecture us: the science is settled. Over the past several decades, concealed carry laws have propagated like weeds and invariably violent crime rates decrease as a result.

Certain kinds of weapons, like the slightly modified combat rifles used in California, and certain kinds of ammunition, must be outlawed for civilian ownership. It is possible to define those guns in a clear and effective way and, yes, it would require Americans who own those kinds of weapons to give them up for the good of their fellow citizens.

There it is: a call for gun confiscation. In the words of one of Obama’s favorite apparatchiks, Rahm Emanuel, never let a crisis go to waste.

Guns in the hands of America’s law-abiding citizens are the problem.

Not failing to name the enemy of Western civilization that has carried out more than 27,000 deadly terror attacks since 9/11.

Not failing to crush the cockroaches that take credit for religiously inspired attacks around the world.

Not refusing to profile and track the organizations than inspire, fund and facilitate an ideology of hatred, terror and world domination.

No, the criminally insane editors of the Times want Americans helpless and more Jihadists imported into the U.S.

I would bet that there was an editorial like this in Germany during the rise of Hitler, Red China during the era of Mao, and Cambodia amidst the ascent of Pol Pot.

The Democrat Party and The New York Times are enemies of freedom and allies of Jihad.