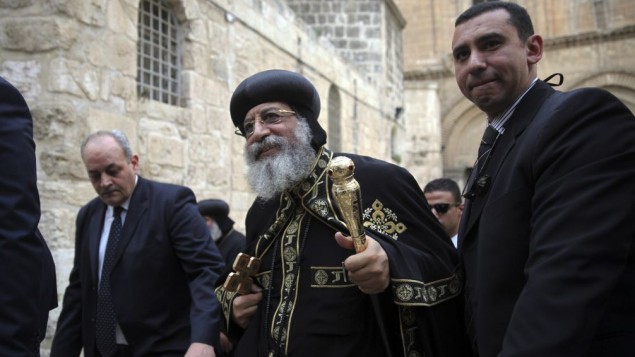 When the subject is Israel, passions flare. In Egypt last week, a hornet’s nest of reactions surrounded Coptic Orthodox Pope Tawadros II’s decision to go to Jerusalem upon the death of the Coptic Church’s second-in-command, Bishop Abraham, who was head of the Jerusalem and Near East Orthodox Diocese in Jerusalem since 1992. Respectful of the bishop’s last will and testament designating Jerusalem as his final resting place, Tawadros II led a delegation of clergy from Cairo to Israel.

When the church announced the news of Pope Tawadros II’s trip to lead the bishop’s funeral, angry reactions flooded the Egyptian media — writers, intellectuals and politicians ran the gamut of speculation and opinion over the “real” reasons for the pope’s visit. In order to go to Israel, Tawadros II had to disobey the Coptic Orthodox 1980 Holy Synod Resolution inherited from his predecessor, Pope Shenuda III even though he pointedly upheld the resolution upon his installation three years ago. The edict forbids Orthodox Christians to travel to Israel without exception.

Upon Egypt’s signature to the Camp David agreement (the peace treaty forged between Israel and Egypt in 1978) the Coptic Orthodox Church issued a ban on travel to Israel for all its members and added ecclesiastical sanctions that are still in place today. The Holy Synod of March 26, 1980, forbids Coptic Orthodox to pilgrimage to the Holy Land under any and all circumstances — a stance taken in the wake of Pope Shenuda III’s refusal to accept President Sadat’s invitation to travel with a state delegation to Israel back in the late 70’s.

The dispute between the two leaders reached scandalous proportions when in September 1981 President Sadat removed the pope from his seat and confined him to asylum in the Wadi Natrun Monastery. Military tanks guarded the pope’s quarters until his release and reinstatement years later under the Mubarak regime.

Shenuda III was not at odds with church policy upon his rejection of Sadat’s invitation. He was consistent with Pope Cyril VI’s earlier decision to stand with Nasser after the 1967 war in solidarity with Arab countries against the unity of Jerusalem with imposing an Israel-visit ban upon the church. In each case, the church body was forced to relinquish visits to Israel and now in place for more than four decades.

Copts are in favor of the pope’s trip for the funeral mass and now use the issue to vocally challenge the 1980 Resolution. For years, deceptive practices have been used by the community to skirt the it. Copts travel from Egypt to Israel via Jordan (and use letters from other church denominations to obtain visas) just to avoid confrontation with Orthodox sanctions. Now the pope’s delegation to Israel highlights the hypocrisy of church leaders as well as its members. However, in answer to the community’s ongoing dilemma, Father Pules Halim responds to the current issue with political correctness, “there is no other below the Pope personally to head funeral prayers” — deflecting the issue altogether.

A cogent argument by the Coptic community remains for the dissolution of the 1980 Holy Synod Resolution. The personal wish of the beloved bishop of Jerusalem to “rest in peace” in Israel defies that church law. As such it now becomes part of the bishop’s legacy for the Orthodox Church’s connection to Israel and its holy sites and many say must lead to the termination of a political document favoring past regimes. Away with the disproportionate penalties of ecclesiastical sanctions for disobeying; such as the loss of communion rights and marriage rights in the church.

The basis for the 1980 Holy Synod Resolution

The religious grounds for the Coptic Orthodox 1980 Holy Synod Resolution is spurious. It states that ecclesiastical sanctions shall not be overturned “until such time as the [Coptic Orthodox] Church repossesses the Sultan Monastery of Jerusalem [now in the possession of the Ethiopian Orthodox Monks]; such resolution is in effect and will be renewed automatically as long as the Monastery has not been re-established, or has not issued a decision about the compound otherwise.”

On the face of it, the resolution is a religious matter. But a deeper look shows that the monastery in question is held in possession by Ethiopian Orthodox monks who, in fact, answer to the Coptic Orthodox pope as fellow worshipers within the same church hierarchy. The monastery is Tawadros II’s jurisdiction over which he holds the ultimate decision power. Upon his order at any time he can reverse the occupation or decide to drop the possession issue as irrelevant.

Furthermore, Pope Shenuda III did not wait for the Sultan Monastery to change hands to install Bishop Abraham in 1992 to oversee the Jerusalem Diocese. He rightly ignored it in order to preserve the church sanctuary and Orthodox community in Jerusalem. Meanwhile, securing the Orthodox Jerusalem site had no bearing on the ban in place for visits to Jerusalem holy sites by Orthodox parishioners from Egypt.

Religion is politics in Egypt. In the end, it boils down to a purely political game. The late Pope Shenuda III said some years back that he would “visit Jerusalem only when he and the Al Azhar imam can go hand in hand.” Supporting his statementa few weeks ago in a meeting with PLO President Abbas in the Coptic Cathedral in Cairo,Tawadros II mimicked Shenuda III’s sentiments when he said, “I hope to visit Jerusalem together with Al Azhar Imam.”  Meanwhile, the Coptic community sacrifices pilgrimages to the Holy Land to wait for an Al Azhar Imam.

Pope Shenuda III’s quote and its reiteration by the next pope is nothing more than code for the liberation of East Jerusalem and return of it to Arab-Muslim control. The anti-Israel stance is nothing new. Coptic religious heads were lopped off from the body of the community as early as Egypt’s first regime — in 1952 when Nasser overturned the king. This was the silent coup inside the church.  Nasser, Sadat and Mubarak were able to control and oppress the political will of the Coptic Christian population through their church leaders.

Pope Tawadros II was installed at a time when Islamic terrorists known as the Muslim Brotherhood were in control of Egypt and, admittedly, under severe pressure to conform to the Islamic state. This was no time to break with traditions of former popes who compromised with Egypt’s regimes against the best interests of their people.  Even so, Tawadros II is accepted and loved by his flock without reservation. The pope is recognized and followed as a profound spiritual leader and respected for his public declaration of non-involvement in Egyptian politics.

Monkhood days together – bishop was teacher of the pope

Pope Tawadros II and his Egyptian delegation to Israel celebrated the funeral mass of his dear friend and colleague, Bishop Abraham of Jerusalem, on November 29, 2015. Monkhood together with Abraham when the bishop was the teacher of the pope added a very personal dimension for Tawadros II in the bestowal of honor and prayers upon the bishop in his final resting place. Hopefully, with this comes an examination by church leaders of the motives behind the Coptic Orthodox 1980 Holy Synod Resolution — sidestepped here once again by clergy to answer the call of duty — to lead to the elimination of this stranglehold upon the entire Coptic Orthodox family.