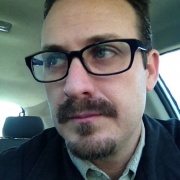 Crass, then known as Chris Day, was a member of the United Anarchist Front in Whittier in the early 1990s, which was part of the Love and RageRevolutionary Anarchist Federation. The United Anarchist Front mobilized against the Gulf War in 1991 and played a leading role organizing other white people to stand for immigrant rights and Ethnic Studies in Orange County, California. They worked in alliance with Chicano students fromMEChA and Crass worked on the underground student newspaper, the Molotov Cocktail.

Many Love and Ragers joined the Maoist/Gramsciist Freedom Road Socialist Organization in the early 2000s and Day/Crass has long been associated with that group.

Chis Day spent two years working in Zapatista occupied Chiapas on the construction of a clinic in the village of Benito Juarez-Miromar. He wrote an article about his Mexican experience for the Freedom Road Socialist Organization website, “The Zapatistas’ Long March,” Posted on October 1st, 2001.

In 2001, Day was also involved with the ultra-radical Ruckus Society.

Crass was an organizer and educator with the Catalyst Project from 2000 through 2011. The Catalyst Project, based in the San Francisco Bay Area, grew out of theChallenging White Supremacy workshop. Crass worked with Challenging White Supremacy after the 1999 WTO mass actions in Seattle, Washington to help strengthen anti-racist politics and practice in the mostly white sections of the Global Justice Movement. Movement elders and long time Maoists Elizabeth Martinez andRoxanne Dunbar-Ortiz were key mentors to the younger generation organizers in theCatalyst Project.

In 2000, Crass helped form the Colours of Resistance network, which served as a think tank and clearinghouse of anti-racist feminist analysis and tools for activists in the U.S. and Canada.

After Sept. 11th, 2001, he helped to found the Heads Up Collective which brought together white anti-racist organizers in the San Francisco, Bay Area, building alliances between the majority white anti-war movement and locally-based economic and racial justice struggles in communities of color. He was also a member of the Against Patriarchy Men’s Group that “supported men in developing their feminist analysis and their feminist leadership.”

Since moving to Tennessee, Crass has worked closely with local Freedom Roaders, who have a big presence in the Volunteer State.

Crass was part of the founding of the national white anti-racist network, Showing Up for Racial Justice (SURJ), and served on the leadership team in 2011. In Knoxville, TN in 2012 he helped initiate Knoxville United Against Racism to bring communities together across races to protest racial profiling, the killing of Trayvon Martin and for immigrant rights. SURJ has played a very active role in galvanizing white “progressive” support for the Black Lives Matter movement, which was essentially created by BlackFreedom Road Socialist Organization supporters.

Crass’ essays have been translated into half a dozen languages, taught in hundreds of classrooms and included in over a dozen anthologies including Globalize Liberation: How to Uproot the System and Build a Better World, On the Road to Healing: An Anthology for Men Ending Sexism, and We Have Not Been Moved: Resisting Racism and Militarism in 21st Century America. During Occupy Wall Street in 2011, he co-edited along with the Catalyst Project the Catalyzing Liberation Toolkit: Anti-Racist Organizing to Build the 99% Movement.