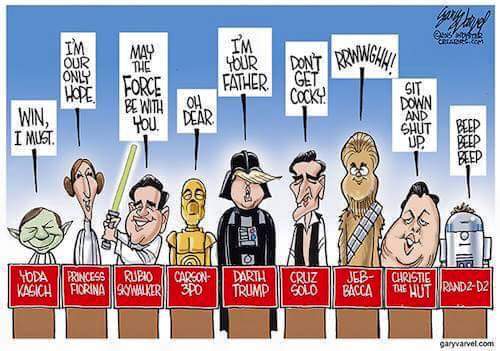 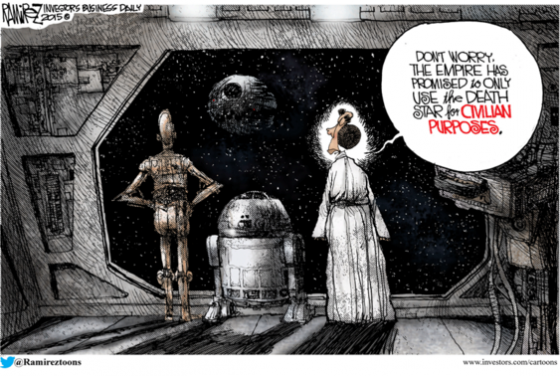 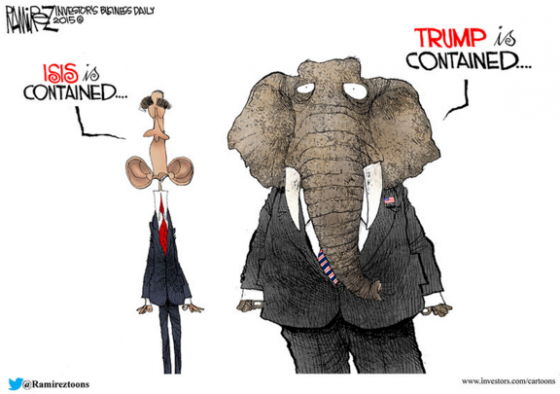 There are times when fear is good. It must keep its watchful place at the heart’s controls. – Aeschylus

Guns are our friends because in a country without guns, I’m what’s known as “prey.” All females are. – Ann Coulter

We’ve got some people who think Shariah law oughta be the law of the land, forget the Constitution. But the guns are there, the Second Amendment is there, to make sure all of the rest of the amendments are followed. – Rep. Louis Golmert (R-TX)

I will cast terror into the hearts of those who disbelieve. Therefore strike off their heads and strike off every fingertip of them – Qu’ran 8:12

This week’s winning essay, The Right Planet’s Obama Attempts to Limit Citizens’ Ability to Defend Themselves Against Terrorism is an excellent, in-depth account of of the worst part of the San Bernardina jihadist strike. It shows that not only is the Obama Administration letting unvetted migrants into the country, it’s using San Bernardino to do its utmost to disarm American citizens. Here’s a slice:

More and more details are leaking out regarding the recent atrocity in San Bernardino, California. According to CNN, Syed Rizwan Farook, 28, traveled to Saudi Arabia for nine days, possibly for the Hajj. Officials told CNN he traveled again to Saudi Arabia in 2015, where he most likely met his wife, Tasheen Malik. Farook’s family claim the couple met on a dating website. It appears Syed Farook went to Saudi Arabia to meet her. Tasheen Malik traveled to the U.S. on a “fiancée visa” (K-1 visa). After her arrival in the States she was granted legal permanent residence (i.e. granted “green card”). They were married for two years. Tasheen Malik, 27, was the mother of six-month-old child. The couple left the child with the grandmother on the morning of the atrocity, saying they had to go to a doctor’s appointment.

Syed Rizwan Farook — one-half of the couple behind the San Bernardino shooting massacre — was apparently radicalized and in touch with people being investigated by the FBI for international terrorism, law enforcement officials said Thursday.

Farook’s apparent radicalization contributed to his role in the mass shooting, with his wife Tashfeen Malik, of 14 people on Wednesday during a holiday party for the San Bernardino County health department, where Farook worked, sources said.

Still, it wasn’t necessarily the only driver behind the carnage as workplace grievances may have also played a role. President Barack Obama hinted as much Thursday when he said that the attackers may have had “mixed motives.”

Farook traveled to Saudi Arabia for several weeks in 2013 on the Hajj, the annual pilgrimage to Mecca that Muslims are required to take at least once in their lifetime, which didn’t raise red flags, said two government officials. It was during this trip that he met Malik, a native of Pakistan who came to the United States on a “fiancée visa” and later became a lawful permanent resident.

Syed Farook was born in Chicago, the son of Pakistani immigrants. The family later moved to Riverside, California, according to the Los Angeles Times.

CBS News reported, “Tashfeen Malik passed DHS counterterrorism screening as part of her vetting for K-1 visa.” As a result, Sen. Ted Cruz (R-TX) and Sen. Jeff Sessions (R-AL) are demanding the Obama White House hand over the immigration records of the jihadi couple responsible for the slaughter in San Bernardino.

Farook reportedly had contact with known terrorists in the Middle East. He has also traveled to the Middle East and to Pakistan multiple times. It has also been reported that Farook viewed ISIS propaganda online. Investigators found a heavy arsenal of guns, ammunition and pipe bombs at their house in Redlands, Cal.

Apparently, Farook spent more of his free time at the mosque memorizing the Qu’ran.

At around 11 A.M. Wednesday, the killer couple entered the Inland Regional Center in San Bernardino and opened fire, murdering 14 people and wounding 21 others. One San Bernardino police officer described the murder scene as “unspeakable carnage.”

Following an afternoon car chase, the butchers were killed in a firefight with police. Both “suspects were heavily armed and wearing tactical attire, and they had an arsenal of ammunition and pipe bombs in their Redlands home,” according to the Los Angeles Times.

Authorities believe there may be a “deeper terror matrix” behind the attacks.

So what has been the response from the Obama Administration and the rabid Left in the wake of the carnage in San Bernardino?

Well, it goes something like this. “Save your stupid, worthless thoughts and prayers” and “act now on gun control.”

Oh, but the despicable Daily News, et al., didn’t stop there. They decided to double-down on their misplaced hate and vile rhetoric by attempting to blame the NRA (yeah, imagine that) for the mass-murder—namely, NRA Executive Vice President Wayne LaPierre.

This article does an exceptional job of spelling out the differences not just between the foreign policy stances of Ted Cruz and Marco Rubio, but gives a between the lines explanation of exactly what’s been wrong with American foreign policy in the last 40 years. Do read it.

Here are this week’s full results. Only GrEaT sAtAn”S gIrLfRiEnD was unable to vote this week, but was not affected by the usual 2/3 vote penalty for not voting:

Well, there it is! The Council will be taking next week off, but will be back after the Holiday… and all of us wish you and yours a joyous and blessed Christmas!