Accuracy in Media Editor Roger Aronoff was a guest analyst on “Cavuto Coast to Coast” with host Neil Cavuto on the Fox Business Network twice this month. The first time was about the media coverage of the Islamic terrorist attack in San Bernardino, California that killed 14 people. The topic of his second appearance, on December 18, was the $1.1 trillion spending bill, and how Republicans still fear hostile media treatment over their handling of the budget.

In 2013, Aronoff reported, the complicit mainstream media and Obama administration worked together to delegitimize the government shutdown and blame Republicans for lost services related to the National Park Service and World War II memorial.

“Well, you can look back to 2013 when the government was shut down for a short time,” noted Aronoff on the show. Yet, “In 2014 the Republicans had a tremendous year electorally across the country.”

“[Republicans are] afraid of still getting hammered,” Aronoff argued. “Well, so what if the media gets upset with them?” he asked. “Look how that’s affected Donald Trump.”

Republican presidential candidate Trump is still in a “dead heat” with Hillary Clinton in a hypothetical matchup, according to Rasmussen Reports on December 28.

Republicans have no real victories with this new budget deal, asserted Aronoff. “And I can tell you, the conservative base is so upset,” he said. “And people wonder why the leading candidates are Donald Trump and Ted Cruz (R-TX). People are not happy with what the Republicans in Congress are doing.”

“Well, the problem is the only thing that they’re being given credit for winning is this oil export deal, changing that,” noted Aronoff. “And so it makes it look like, ‘Oh, boy, the Republicans got a benefit for Big Oil, and that’s what they fight for…”

In defense of Donald Trump’s suggestion that Muslim immigration be restricted until we better understand the nature of the Jihadist terror threat, the following is offered up by our long-suffering Summer Intern @BiffSpackle:

Democrats, progressives, and other miscreants: please feel free to answer any or all of these questions in the comments section below. I’ll be sure and respond to each, with all due respect, of course.

P.S., Keep up-to-date with anti-Jihad news by visiting some of the Fabulous 50 Award Winners for Anti-Jihad Blogging.

OPEC says that $10 trillion worth of investment will need to flow into oil and gas through 2040 in order to meet the world’s energy needs.

The OPEC published its World Oil Outlook 2015 (WOO) in late December, which struck a much more pessimistic note on the state of oil markets than in the past. On the one hand, OPEC does not see oil prices returning to triple-digit territory within the next 25 years, a strikingly bearish conclusion. The group expects oil prices to rise by an average of about $5 per year over the course of this decade, only reaching $80 per barrel in 2020. From there, it sees oil prices rising slowly, hitting $95 per barrel in 2040.

Long-term projections are notoriously inaccurate, and oil prices are impossible to predict only a few years out, let alone a few decades from now. Priced modeling involves an array of variables, and slight alterations in certain assumptions – such as global GDP or the pace of population growth – can lead to dramatically different conclusions. So the estimates should be taken only as a reference case rather than a serious attempt at predicting crude prices in 25 years. Nevertheless, the conclusion suggests that OPEC believes there will be adequate supply for quite a long time, enough to prevent a return the price spikes seen in recent years.

Part of that has to do with what OPEC sees as a gradual shift towards efficiency and alternatives to oil. The report issued estimates for demand growth five years at a time, with demand decelerating gradually. For example, the world will consume an extra 6.1 million barrels of oil per day between now and 2020. But demand growth slows thereafter: 3.5 mb/d between 2020 and 2025, 3.3 mb/d for 2025 to 2030; 3 mb/d for 2030 to 2035; and finally, 2.5 mb/d for 2035 to 2040. The reasons for this are multiple: slowing economic growth, declining population rates, and crucially, efficiency and climate change efforts to slow consumption. In fact, since last year’s 2014 WOO, OPEC lowered its 2040 oil demand projection by 1.3 mb/d because it sees much more serious climate mitigation policies coming down the pike than it did last year.

Of course, some might argue that even that estimate – that the world will be consuming 110 mb/d in 2040 – could be overly optimistic. Coming from a collection of oil-exporting countries, that should be expected. Energy transitions are hard to predict ahead of time, but when they come, they tend to produce rapid changes. Any shot at achieving the world’s stated climate change targets will require a much more ambitious effort. While governments have dithered for years, efforts appear to be getting more serious. More to the point, the cost of electric vehicles will only decline in real dollar terms over time, and adoption should continue to rise in a non-linear fashion. That presents a significant threat to long-term oil sales.

At the same time, OPEC also issued a word of caution in its report. While oil markets experience oversupply in the short- to medium-term, massive investments in exploration and production are still needed to meet demand over the long-term. OPEC believes $10 trillion will be necessary over the next 25 years to ensure adequate oil supplies. “If the right signals are not forthcoming, there is the possibility that the market could find that there is not enough new capacity and infrastructure in place to meet future rising demand levels, and this would obviously have a knock-on impact for prices,” OPEC concluded. About $250 billion each year will have to come from non-OPEC countries.

In a similar but more disconcerting conclusion, the Oslo-based Rystad Energy recently concluded that the current state of oversupply could be “turned upside down over the next few years.” That is because the drastic spending cuts today will result in a shortage within a few years. To put things in perspective, Rystad says that the oil industry “needs to replace 34 billion barrels of crude every year – equal to current consumption.” But as a result of the collapse in prices, the industry has slashed spending across the board and “investment decisions for only 8 billion barrels were made in 2015. This amount is less than 25% of what the market requires long-term,” Rystad Energy concluded. The industry cut upstream investment by $250 billion in 2015, and another $70 billion could be cut in 2016. The latter figure did not take into account the recent decision by OPEC to abandon its production target, which sent oil prices falling further.

So what are we to make of this? There could be plenty of oil supplies in the future, but as it stands, the industry is massively underinvesting? This illustrates a troubling tension within the oil industry. Oil prices will be set by the marginal cost of production, and recent efficiency gains notwithstanding, marginal costs have generally increased over time. Low-cost production depletes, and the industry becomes more reliant on deep-water, shale, or Arctic oil, all of which require higher levels of spending. In many cases, these sorts of projects are not profitable at today’s prices. The price spikes seen in 2011-2014 sowed the seeds of the current bust, but the pullback today could create the conditions of another spike in the future. OPEC could be a bit too sanguine with its call for $95 oil in 2040.

At the same time, future price spikes set up the possibility of much greater demand destruction, especially if alternatives become more viable. This is the difficult balancing act that the industry must pull off over the next few decades.

By Nick Cunningham of Oilprice.com “Cruz is an incredibly talented, principled and unwavering voice for constitutional and limited government,” Roman wrote. “That’s why I’m endorsing him.”

His endorsement led to party chief Nelson Diaz to call for Roman’s resignation, saying the endorsement “violated a Republican Party of Florida rule that prohibits GOP officers from endorsing one Republican over another.”

Speaking of picking and choosing Republicans, Nelson Diaz’s Chairmanship was reported to be the “outcome of [a] closed door meeting” barring Republicans who have varying perspectives. The level of vitriol aimed at Manny is a bit more understandable when one reads more about Nelson Diaz:

“Nelson has become one of Tallahassee’s young rising stars since serving as Chief Legislative Aide to the Former Speaker of the Florida House of Representatives, and now United States Senator, Marco Rubio.”

Diaz has donated to Marco Rubio, as well as Democratic National Committee chairwoman Debbie Wasserman-Shultz (you read that right).

Alluding to pressure to toe the line in his endorsement for Ted Cruz, Roman writes,

However, even in an environment where there is overwhelming indirect pressure to get behind one of the local candidates, Ted Cruz’s story and platform break through all the noise.

The battle in Florida is one that has been simmering locally throughout the country as conservatives struggle to gain control of their respective Republican leadership. The struggle is nothing new and is reminiscent of how the establishment treated Ronald Reagan, the grassroots candidate of his era as often pointed out by author and speaker Trevor Loudon.

Consider Craig Shirley, the “preeminent Ronald Reagan biographer and historian” who reminded people on a Breitbart radio program that the Washington establishment “disdained Reagan much like it hates today’s top conservatives…”

Noting that ‘RINOs’ never embraced Reagan since he campaigned for Barry Goldwater, Shirley said he actually went to work for the Republican National Committee (RNC) in 1982 because Lyn Nofziger, Reagan’s top adviser and strategist, said there were not enough Reaganites at the RNC, which was populated mostly by establishment ‘Bushies’ allied with George H.W. Bush.

Similarly, Glenn Beck spoke about how the establishment sought to thwart Ronald Reagan on his syndicated radio broadcast in November.

The principled stance Manny Roman has taken should be an inspiration to conservatives who battle the establishment. After all, Roman got a tweet from Cruz himself. He also has the respect of this author.

Manny Roman on why he’s supporting our campaign: “This is also about integrity and trust.” #CruzCrew https://t.co/i8jZ16PhTf

With the public focused on the holidays, the FDA has lifted the ban on gay blood. Where’s the coverage? What this means is that the five million Americans a year who receive blood transfusions could be exposed to the AIDS virus or other infections in the diseased blood of sexually active homosexuals. Do you or your loved ones want to die in order to advance the gay rights agenda? Watch this show to find out how to protect yourself. 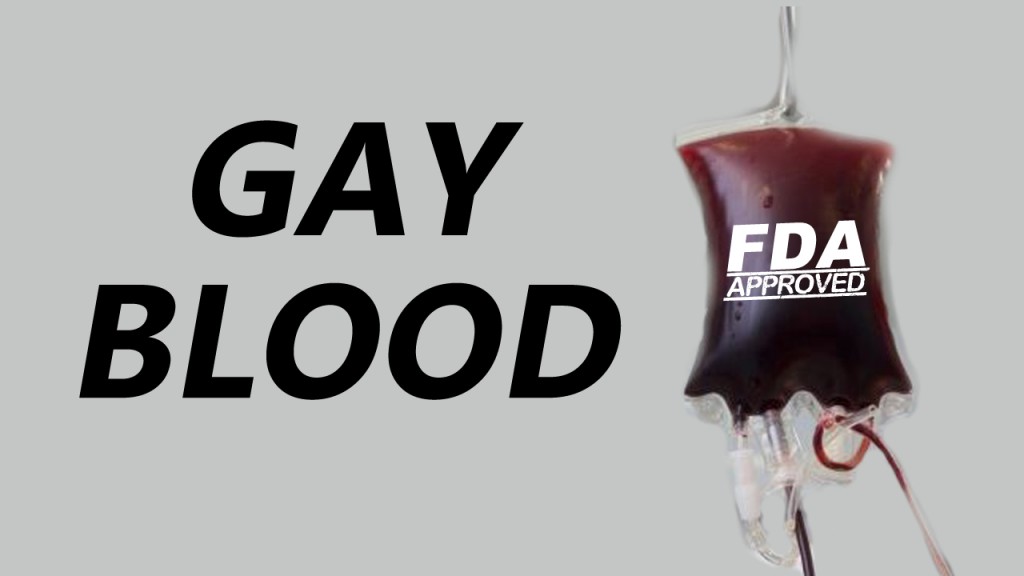