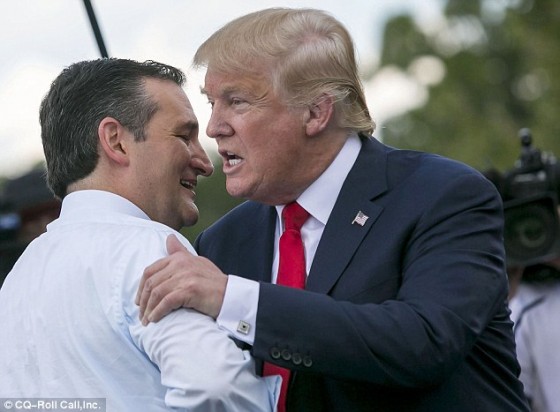 A puzzling mindset has emerged in some conservatives regarding Cruz. A publisher who usually publishes my articles rejected one touting Ted Cruz for president. The publisher politely lectured me about my support for Cruz; calling it misguided and even non Christian. I love the way when people know you are Christian they try to use your faith to manipulate you. (smile)

Conservatives choosing to perceive Trump as they want him to be is a reflection of their anger, frustration and fear of losing their country. I witnessed this phenomenon when Trump first announced his campaign. An evangelical minister attempted to convince me that Trump is a committed Christian. I was a bit taken aback. While I do not think poorly of Trump, it never occurred to me to use the words “Trump” and “Christian” in the same sentence. My Evangelical brother’s effort to make Trump a strong Christian confirmed that Conservatives are desperate. Pure and simple.

The reality is many conservatives will follow anyone promising “real” change in Washington. Given the betrayal, heartache and disappointment that the GOP has put tea partiers/patriots through, I cannot criticize my patriot brothers and sisters who support Trump. It kind of offends me when I hear conservative pundits trashing Trump supporters; in essence, beating up on the victims.

I will state again that if Trump becomes our GOP nominee, I will wave “Vote Trump!” signs on street corners. However, I do have concerns about the man. I am not talking about the mainstream media, Democrats and RINO’s accusations about Trump.

As a matter of fact, please allow me to digress for a moment. I heard a report that British politicians have half a million signatures on a petition supportive of banning Trump from the UK because of his proposal to temporarily ban Muslims from the US. http://usat.ly/1NgoxG1 Folks, this infuriated me. I thought, “Just because you idiots have surrendered to political correctness and allowed Muslim terrorists to dominate your country, does not mean we should do the same in the US!”

Back to my issues with Trump. My dad said a snake can swim under water a very long time just like a fish. However, it eventually has to come up for air because it is not a fish, it is a snake. Folks, I am not calling Trump a snake. I am simply saying while Trump has touted conservative values during his campaign, Trump’s history is not conservative. http://bit.ly/1WoWcUN Perhaps, Trump has had a road to Damascus conversion and is now a rabid conservative. Who knows? But why risk it?

A wise person said, “The best predictor of future behavior is… past behavior.” Folks, I suspect that there is very little doubt in your mind as to who Ted Cruz is and what he will do as president. Cruz has a history of rock solid conservatism.

And dare I mention the “C” word, character. Cruz proudly proclaims his Christianity. Real religious conviction affects ones character/behavior. I want my president to believe that there is a God and that it is not him.

“The fear of the Lord is the beginning of wisdom…” Proverbs 8:10

William Bradford, the Christian who lead the pilgrims on the Mayflower to the new world, seeking religious freedom, knew this scripture to be true. Bradford was very outspoken about his belief and trust in God to lead them to their new home in the new world; built on the unique concept of individual freedom.

What I found most distressing about SCOTUS, in essence, making same sex marriage the law of the land is the Left’s successful effort to make normal what has been considered deviant since the beginning of time. SCOTUS’s decision opened the floodgates not for tolerance, but for Americans to be bullied into embracing anti-biblical behavior. Why do same sex couples force Christian businesses to service their weddings rather than going to businesses with flashing neon signs, “We Service Homosexual Weddings”? Clearly, their agenda is not about getting a wedding cake and all about the Left’s intolerance of Christians.

It still blows my mind that Christians are actually being thrown into jail in the United States of America for not embracing sodomy. http://bit.ly/207eVay Ted Cruz has vowed to defend religious freedom. I know he will.

A tea party group leader said they feel like Cruz is lecturing them when he speaks. I thought, “Excuse me. With a morally bankrupted anti-America scoundrel like Barack Obama running our country for eight years, America desperately needs a leader/Commander-in-Chief of the highest character and moral standards”. No way, would I reject such a candidate because I feel a bit intimidated in their presence. In a field of two-faced, say-whatever-necessary-to-win candidates, I say praise God for a candidate who truly stands for something (conservatism).

When I was a child, I assumed all US presidents were exceptional people of the highest character. Man, was I wrong. Americans long for a great trustworthy and moral leader. America desperately needs Ted Cruz.